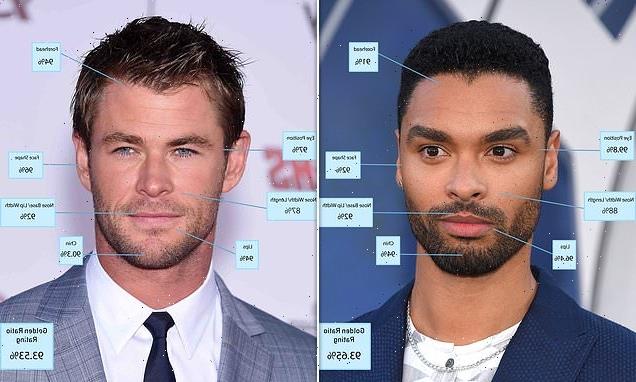 Regé-Jean Page is the most handsome man in the world

Bridgerton star Regé-Jean Page has been crowned the most handsome man in the world, according to ancient scientific research.

The 34-year-old actor, played Simon Basset, the Duke of Hastings in the hit Netflix series, was found to be 93.65 per cent accurate to the Greek Golden Ratio of Beauty Phi, which measures physical perfection.

Men In Black star Chris Hemsworth was second with 93.5 3per cent, Black Panther hunk Michael B Jordan was third with 93.46 per cent and singer Harry Styles was fourth with 92.30per cent. 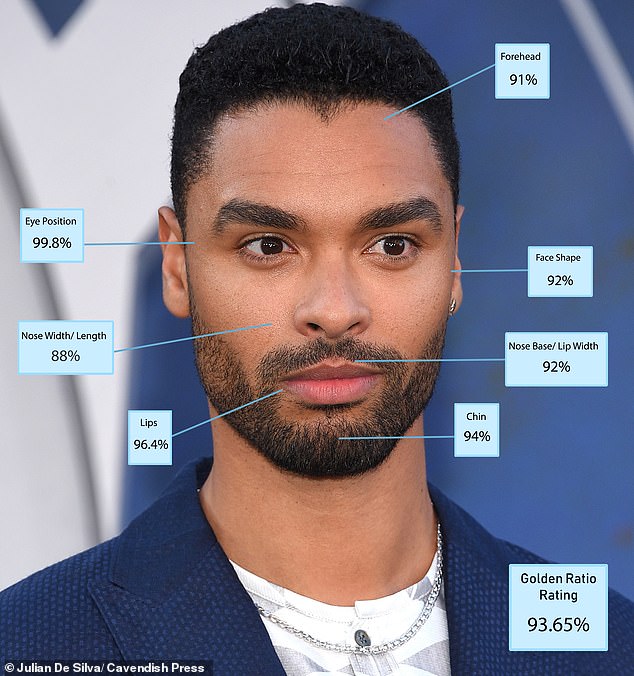 Regé-Jean Page has been crowned the most handsome man in the world, when all elements of his face were measured for physical perfection

The Golden Ratio of Beauty Phi originates from the European Renaissance. Artists and Architects used an equation – known as the Golden Ratio – as an aid during the creation of their masterpieces.

The ratio can be applied to anything and was used by Leonardo Da Vinci for the perfect human male body in his famous work, the Vitruvian Man.

Scientists have since adapted the mathematical formula to explain what makes a person beautiful.

The length and the width of someone’s face is measured and then the results are divided.

The premise is that the closer the ratios of a face or body are to the number 1.618 (Phi), the more beautiful they become.

A person is considered to be more beautiful if the numbers are equal.

Dr De Silva, who runs the Centre For Advanced Facial Cosmetic And Plastic Surgery in Harley Street, London explained: ‘These brand new computer mapping techniques allow us to solve some of the mysteries of what it is that makes someone physically beautiful and the technology is useful when planning patients’ surgery.’

Here, Femail reveals the top 10 most handsome celebrity men in the world,  with Dr Julian de Silva’s explanation of why they’re so desirable, and where they were marked down.

Regé-Jean Page was a narrow winner when all elements of the face were measured for physical perfection.

‘He had easily the highest score for his eye spacing and the positioning of his eyes also scored highly.

‘His perfectly shaped lips also scored highly and the only mark he got that was slightly lower was for his nose width and length.’

Dr De Silva said: ‘Chris Hemsworth was a narrow winner when all elements of the face were measured for physical perfection.

‘Hemsworth is now one of the biggest movie stars in the world after first finding fame because of his clean cut good looks on the Aussie soap Home and Away.

‘He has the old fashioned matinee idol glamour of the Hollywood stars of yesteryear and that scores very highly when you are measuring classical beauty.’ 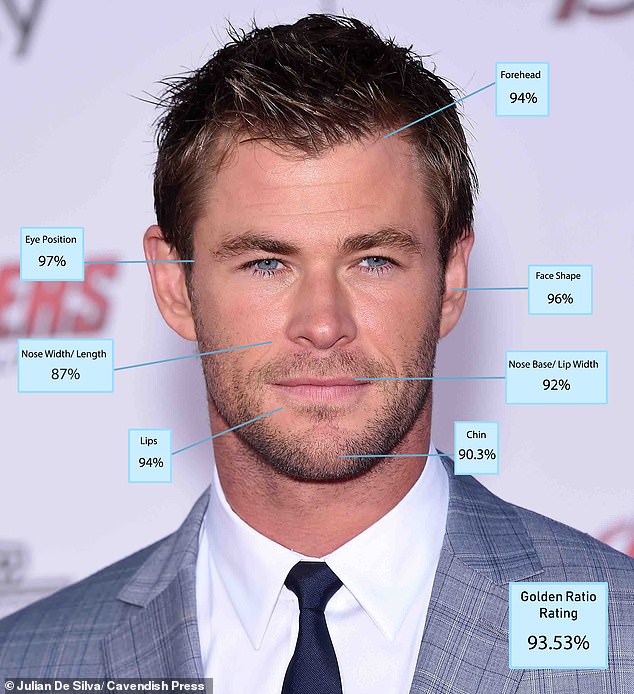 The American Actor known for his roles in Black Panther and Creed also came out with high scores.

Dr De Silva said: ‘Actor Michael B Jordan was a close second and topped the scores for the width and length of his nose and came second for his chin.’

The 35-year-old heartthrob has delighted screens for his performances in Fantastic Four and Justice League, and is set to star in Creed III. 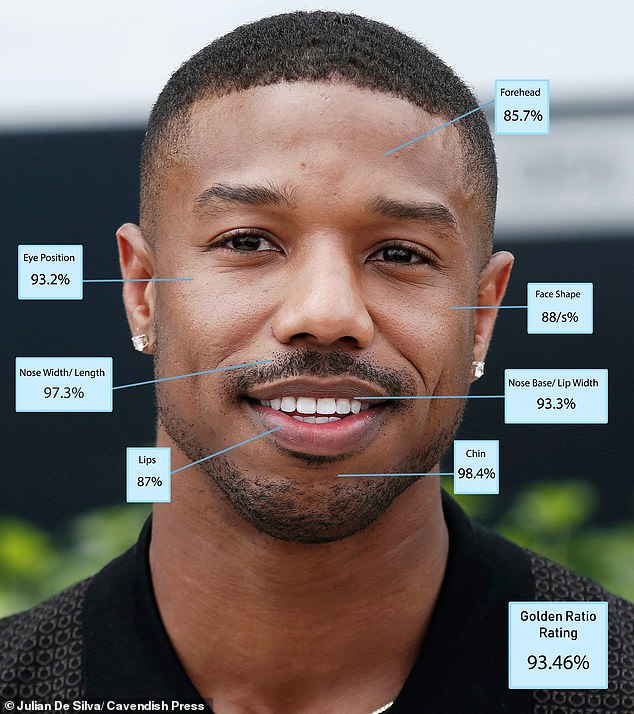 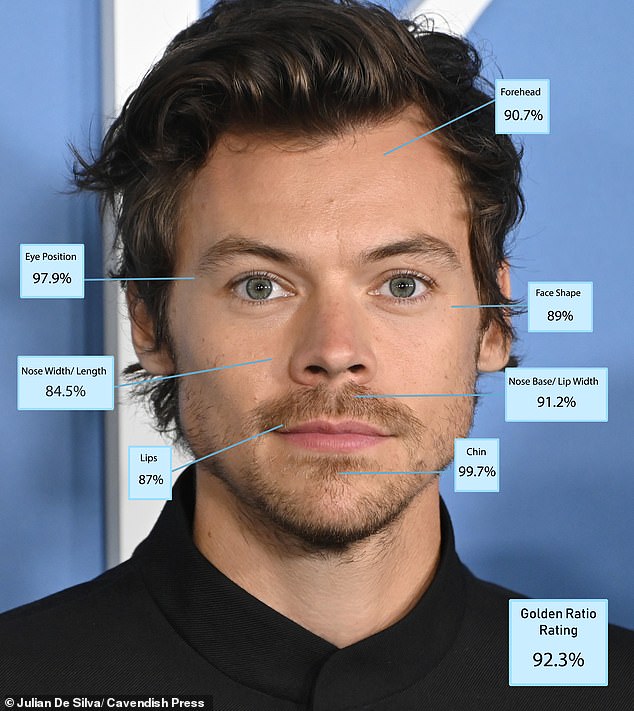 Harry Styles came in fourth place and scored an almost perfect 99.7 per cent for his chin and was second highest for his eye spacing

Dr De Silva said: ‘Harry Styles came fourth and he scored an almost perfect 99.7 per cent for his chin.

‘He was second highest for his eye spacing. It is no surprise that he is fast becoming a movie heartthrob as well as a singing superstar.’ 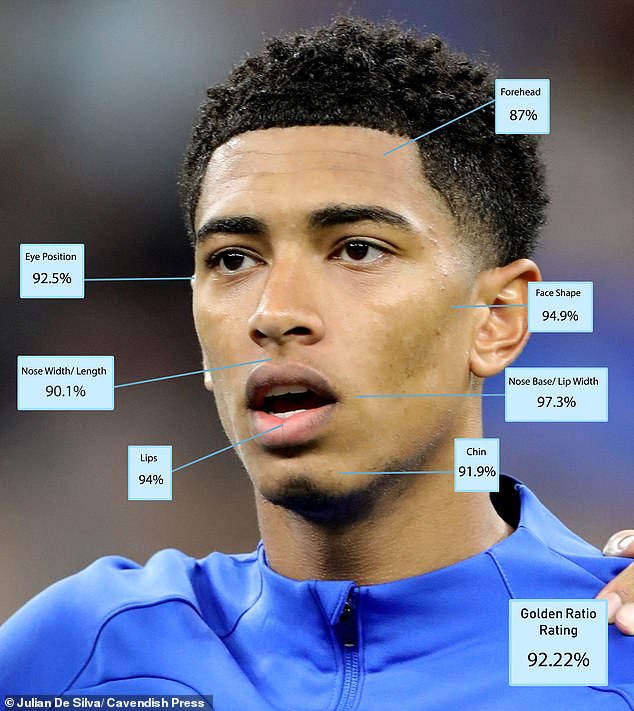 Footballer Jude Bellingham scored highly, coming in fifth place. He received top scores for the almost perfect positioning between his lips and his nose

A sensation at the World Cup and not just for his football and sporting ability.

He explained that Bellingham scored highly for the almost perfect positioning between his lips and his nose.

His overall face shape had one of the lowest scores in the top ten. 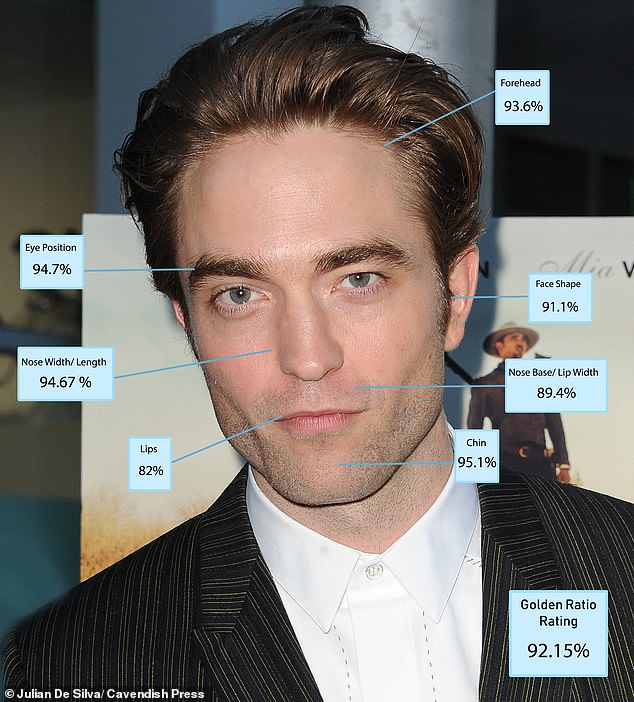 The actor was in the top five for nearly all of the categories because of his classically shaped features and ‘wonderful chiselled jaw.’

Dr De Silva said: ‘His only score below average was for his lips, which are a little thing and flat.’ 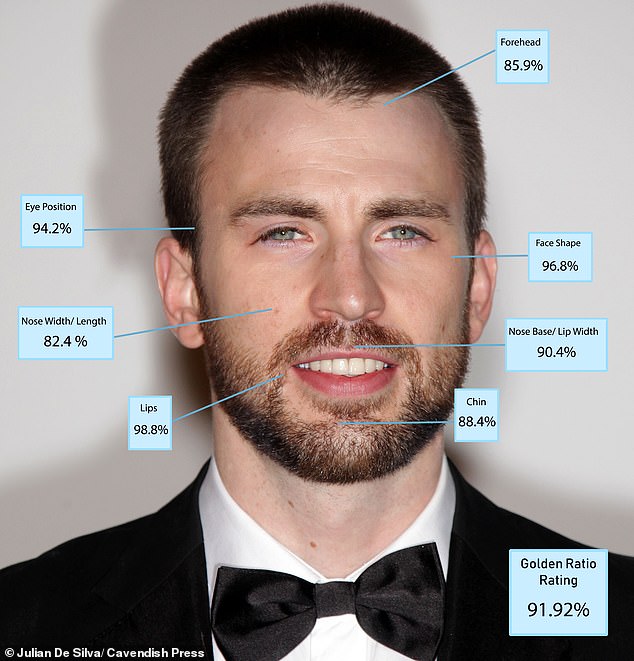 The 41-year-old was named People magazine’s sexiest man alive in 2022 and has been breaking the hearts of many since his debut in 2005’s Fierce People.

Dr Silva said: ‘The Captain America star really has those classic chiselled Hollywood leading man looks, which scored highly with eye positioning and the near perfect harmony of his facial outline.’ 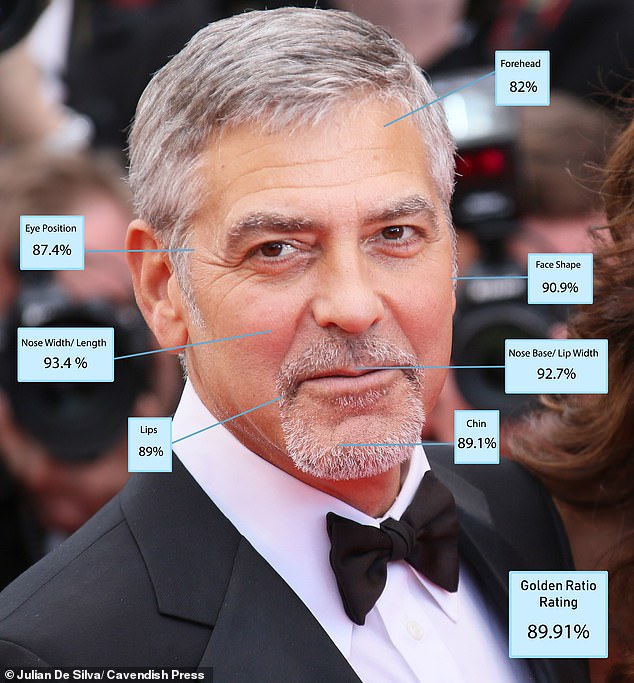 George Clooney has moved down the top ten over the years. But at 61 to make it into the top 10 is remarkable

George Clooney has moved down the top ten over the years, largely because of the toll nature has taken.

Dr De Silva said: ‘He is still an intensely beautiful man but there has been a loss of volume in his face and, inevitably, some sagging around the eyes.

‘To still make the top ten at 61 is remarkable and is testament to his incredible natural good looks.’ 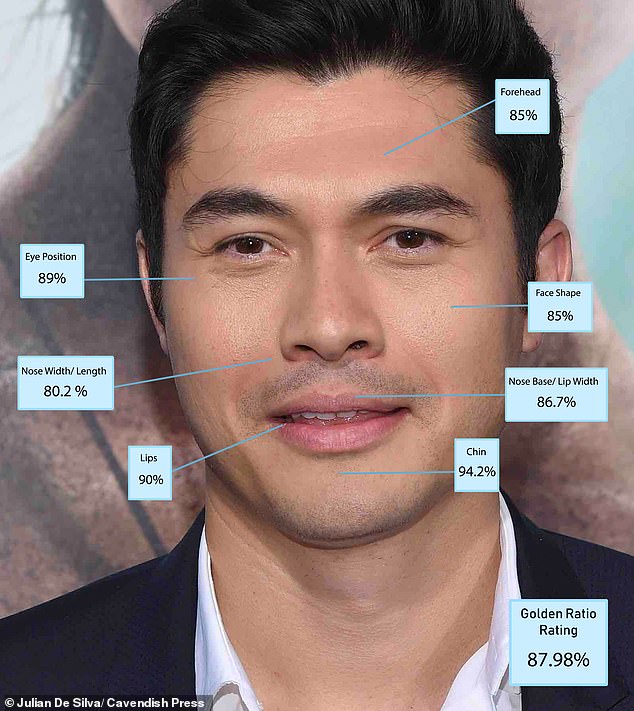 The 35-year-old heartthrob made his feature film debut in the 2018 smash hit Crazy Rich Asians.

He has played the leading man in films Last Christmas, Snake Eyes and Persuasion.

Dr De Silva explained: ‘The Malaysian-British actor and presenter scored highly for his chin shape and eye spacing but was marked down by the shapes of his nose and face.’ 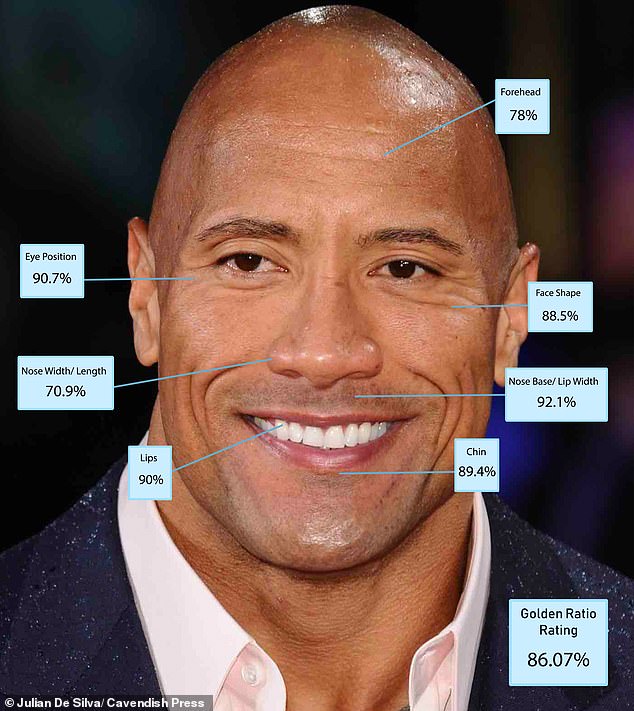 The Rock, Dwayne Johnson  is the second oldest man on the list after George Clooney and he is ageing brilliantly

Dr De Silva said: ‘The Rock is the second oldest man on the list after George Clooney and he is ageing brilliantly. He scored well for the shape of his lips and the gap between his lips and his nose.

‘He had the lowest score in the top ten for his nose which was a little wider than the others.’

I'm a female builder – people are always shocked when I turn up on site, especially when I have my lashes and nails done | The Sun
Entertainment