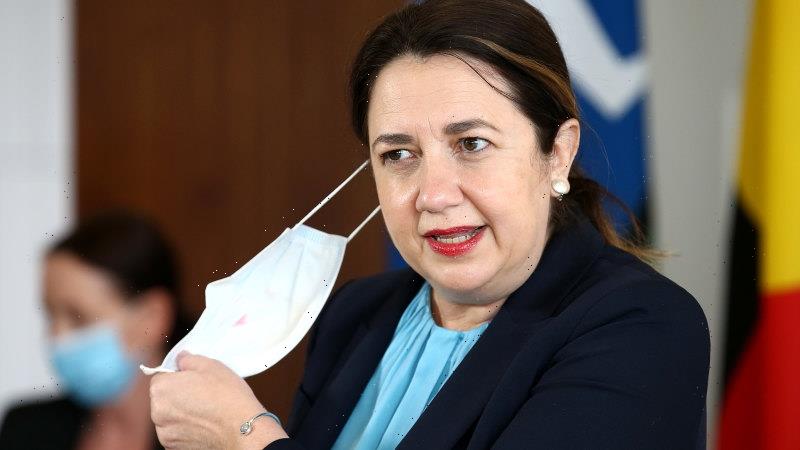 Queensland Premier Annastacia Palaszczuk has wrongly claimed that the federal government was planning to establish mass vaccination centres to administer AstraZeneca vaccines to under 40s.

Speaking to the ABC’s 7.30 on Wednesday night, Palaszczuk said Prime Minister Scott Morrison had changed the advice on the AstraZeneca vaccine in order to set up the clinics. 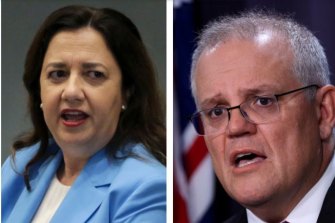 Premier Annastacia Palaszczuk does not want Queenslanders under 40 to get the AstraZeneca vaccine despite Prime Minister Scott Morrison opening it up to them.Credit:Matt Dennien/Rhett Wyman

“I think the Commonwealth was looking at setting up mass vaccination hubs to administer AstraZeneca to the under 40s,” she said. “I mean this is extraordinary.”

A spokesman for the federal government said: “That is absolutely incorrect and it is unclear what the Queensland Premier is basing that claim upon.”

Mass vaccination clinics are run by the state governments not the Commonwealth.

The Premier’s office was asked about the claim, but did not respond.

Mr Morrison announced on Monday night that the national cabinet had agreed to a medical indemnity scheme that would allow GPs to give the vaccine to anyone under 40 if they wished to take it.

Australia has 2.6 million unused doses of AstraZeneca available with just 7.54 per cent of the population fully vaccinated against COVID-19.

The move followed a clamour among younger Australians who were struggling to access Australia’s limited vaccine supplies. The Therapeutic Goods Administration has approved the jab for anyone aged over 18.

The Royal Australian College of General Practitioners welcomed the broader access and said people were keen to get vaccinated but criticised the government for not letting doctors know of the change in advice in advance.

Ms Palaszczuk and the Queensland’s chief health officer Jeannette Young have both said that younger Australians should not take the jab because of a small risk of a rare blood clotting condition.

Ms Palaszczuk also again said that Britain was not offering AstraZeneca to people under 40.

But Britain’s Joint Committee on Vaccination and Immunisation (JCVI) recommends Pfizer or Moderna for under 40s “if available and if it does not cause delays in having the vaccine”.

NSW has already said those under 40 wanting AstraZeneca will be able to access it only through their GPs after a detailed conversation and not at its mass vaccination centres.

Queensland’s supplies of Pfizer will run out on Monday until its next allocation from the Commonwealth, but it has plenty of AstraZeneca. Queensland recently requested and received an additional 20,000 AstraZeneca vaccines for the Sunshine Coast University Hospital.

Queensland CHO Ms Young said at a news conference earlier in the day that it would be terrible if an 18-year-old died from a blood clot linked to the vaccine given they were unlikely to die from COVID-19.

Ms Palaszczuk also called for the number of Australians allowed to return to the country to be cut by 75 per cent. About 35,000 Australians are trying to get home from overseas but are hampered by restrictions on hotel quarantine spots imposed by the state governments.

Federal Home Affairs Minister Karen Andrews said blaming returning Australians for causing coronavirus outbreaks, while exemptions were given for sport stars, celebrities and even Ms Palaszczuk herself, didn’t stack up.

“Here in Queensland, we have Annastacia Palaszczuk, who’s saying that she wants to go over to the Olympics in Tokyo and in fact, that was one of the reasons that she gave for her need to step up and get the Pfizer vaccine,” Ms Andrews said.

“So she’s actually … arguing against her own travel to Tokyo.

“It’ll be interesting to see what Ms Palaszczuk now has to say about whether or not she’s going to travel to Tokyo.”

The Premier was not asked on 7.30 why she should still travel to Tokyo at the same time as calling for a reduction in the number of Australians being allowed to return home.

Can I travel to Phuket and Bangkok? Latest Covid and holiday advice for Thailand
Entertainment