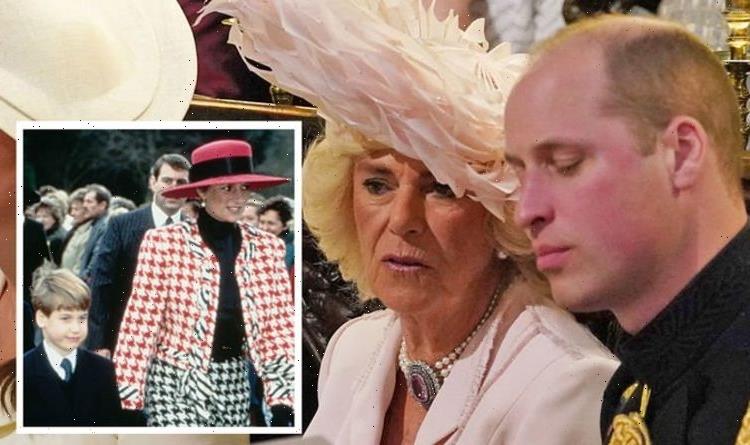 Prince William and Kate’s kiss compared to Diana and Charles

Prince Charles married Camilla Parker Bowles in 2005 and Prince William, the Duke of Cambridge and Prince Harry, the Duke of Sussex gained a stepmother. While reports suggest it took William time to “warm” to Camilla, he is nothing but cordial when in her presence body language expert Judi James told Express.co.uk.

Before Diana, Princess of Wales’ tragic death in August 1997, Charles had reportedly intended to introduce his sons to Camilla.

At that point, it had been five years since Charles and Diana separated.

But following Diana’s passing, the couple decided to keep their relationships “low-key” and in 1998, Prince William met Camilla by chance.

A then 16-year-old William had dropped in unexpectedly at St James’ Palace where Camilla had become “a regular visitor”, the Guardian reported.

They spoke for 30-minutes and Charles was present.

According to an expert, Prince William is “nothing short of polite” when he is in Camilla’s presence.

Express.co.uk spoke exclusively to Judi James, author of The Body Language Bible and a body language expert about the times William and Camilla have been in each other’s company.

She said: “Prince William has been making relationship compromises most of his life and one of the most challenging must have been the one with his fathers second wife.

“His loyalty to his mother and the fact that he was old enough to witness Diana’s pain over Camilla must have left some form of resentment.

“Even his relationship with his father is rumoured to be patchy,” she claimed.

“Step-parenting is always a challenge but there are no signs between Camilla and either of Charles’ sons that she has ever attempted a maternal role with them.

“She [Camilla] looks polite and chatty in these poses, as she does with everyone.

“William is an adept masker, even managing some jolly-looking moments with Harry when he was last in the UK and on the occasions when he is seen at events with Camilla he looks nothing short of polite.

“Like he is with his father though, there seem to be no visible signs of either seeking her out for a chat or the use of more intimate-looking eye-greets or engages or rapport rituals to suggest anything deeper than cool politeness,” Judi added.

When Kate got married to the future King, Camilla gave her a special bracelet inscribed with both of their initials and has been best-placed to guide the new family member through the ups and downs of marrying into one of the most famous families in the world.