The Duke and Duchess of Cambridge have carried out their first royal engagement via video call to school children whose parents are working on the frontline.

William, 37, and Kate, 38, were seen giggling as the pupils, wearing Easter-themed bunny ears, presented them with a ‘virtual’ bouquet of paper flowers.

The couple, dialing in from their Norfolk home, Anmer Hall, spoke to staff and youngsters from Casterton Primary Academy in Lancashire, where teachers are helping to look after the children of key workers in frontline services including the NHS and social care, as well as supermarkets and delivery drivers.

The Duke and Duchess were keen to thank staff for all they were doing during the Covid-19 epidemic as well talk about the effect it is having on the youngsters. 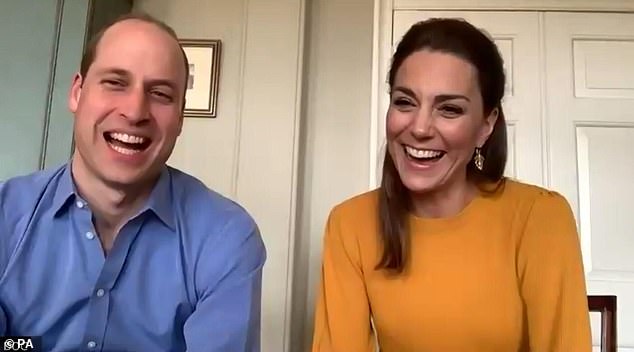 William, 37, and Kate, 38, were seen giggling as the pupils presented them with a ‘virtual’ bouquet of paper flowers

But there was also time for a spot of fun as the pupils showed off their Easter arts and crafts, including a felt collage they had made, with rainbows and hearts saying ‘Thank you NHS’.

One child, who had been doing a history project told the duke that the ‘first William was called William the Conquerer’. 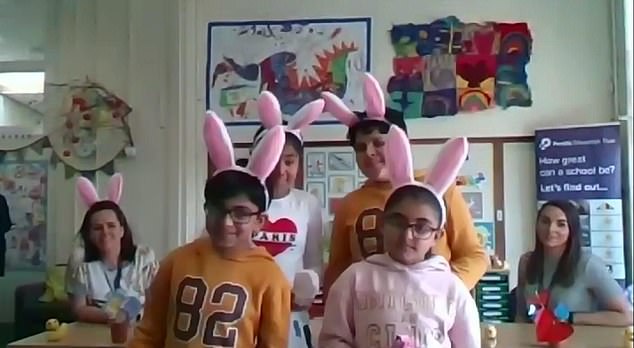 However the current Prince William laughingly said he didn’t think he could answer that.

Anita Ghidotti, Chief Executive of the Pendle Education Trust, said the children also asked them who ‘the best famous person was that they had met’.

‘I bet they don’t get asked very often,’ she laughed. ‘The Duchess said that Prince George has been watching lots of David Attenborough’s Blue Planet so that would probably be hers. The Duke said his favourite people weren’t actually famous.’

Kate, dressed in a spring-appropriate yellow Zara jumper with puff sleeves and gold fern drop earrings costing £165 from Zoraida London, was also given a virtual bouquet by Lloyd, aged nine.

‘He had spent three days painstakingly making paper flowers covered with ladybirds for the Duchess,’ Anita said, adding: ‘He spent so much time on it and called himself the origami king. He did a virtual handover of his posey. He was very proud.

‘The flowers had ladybirds on them and the Duchess said her Louis loved ladybirds and had been in out in the garden looking for them.’ 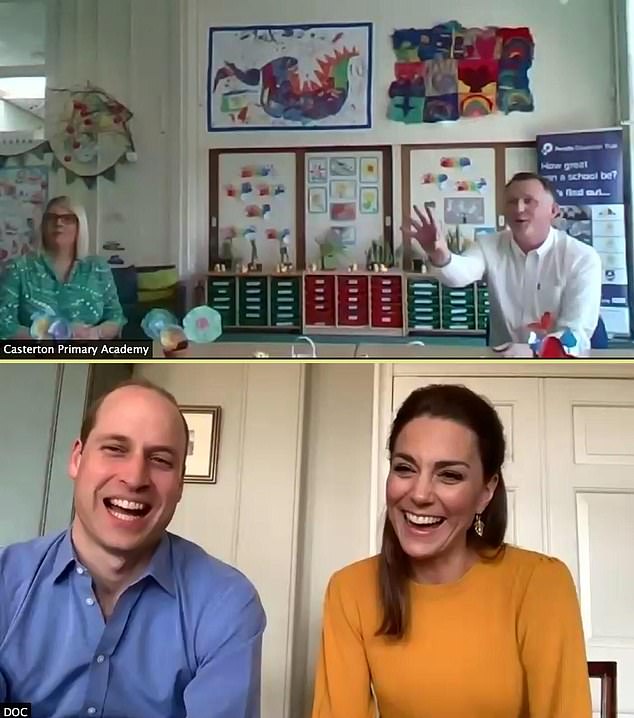 The primary school is one of five local academies run by the Pendle Education Trust and cares for the children of many key workers at nearby Burnley General Hospital.

It also works closely with the emotional and welfare support charity, Place2Be, of which Kate is patron, which is providing phone ‘check-ins’ for children and parents.

Several children showed William and Kate portraits of their key worker parents and explained why they were proud of them.

Kate spoke to Harris, age 10, whose mother is an NHS administrator for health visitors, and Lloyd, aged 9, whose mother works at a special school.

The Duchess asked: ‘What are your names? Very nice to meet you. I’m Catherine and this is William next to me. Are you holding up pictures of your mummies and daddies?’ 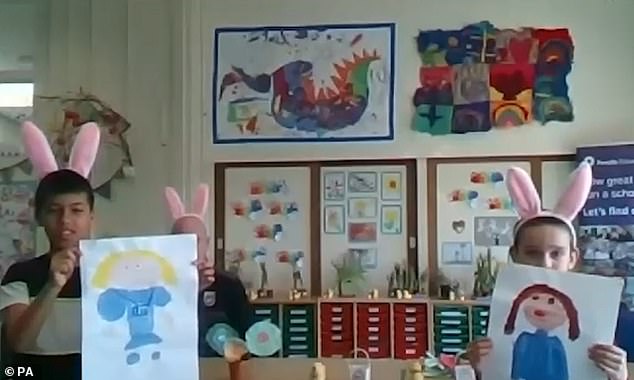 Harris replied: ‘This is a picture of my mum and she works for the NHS as an admin for the health visitors and I’m really proud of her.’

Kate replied: ‘Ah, great photo – well done, it’s brilliant. I agree you should be very proud of her, they’re doing an amazing job all the NHS workers, so well done you.’

The couple also chatted to staff, including Leala Porter, Place2 Be Project Manager at Pendle Primary Academy, about the difficulties that schools, teachers and children are facing as a result of the Covid-19 pandemic.

The Duchess said: ‘To you and everyone who is in during this time, it must be such a relief for all the parents who are key workers to know that their children have the normality and structure and they’ve got a safe place for them to be.

‘So really, really well done and for all of you I know it’s not easy circumstances, but it’s fantastic.’

William chipped in: ‘Good northern volunteering spirit going on up there, very good of you!’

When the staff wished them a lovely Easter, William replied: ‘There’ll be a lot of chocolate being eaten here that’s for sure.’

‘You keep eating it!’ quipped Kate.

The couple also said they wished they had known that the staff were dressing up in bunny ears as they would have put theirs on too.

Speaking afterwards, Leala said: ‘Some of the children, especially the older ones, were actually asking about why they had such an interest in mental health and that really opened a dialogue.

‘They understood what the Duke and Duchess were trying to promote. There was a genuine interest.’

Anita said the visit has been a real tonic for the school and the children.

‘The children brought in lots of things to show them. Last week we were still doing things like maths and other schoolwork. But this week we have been making a real effort to do some fun things.

‘We have been trying to find the positive in all of this and actually these children are really loving being here. They are making new friends or seeing kids they don’t normally see very often.’

She added: ‘I can’t tell you the difference things like this make. We are in such difficult circumstances. I can’t believe they chose us, out of everyone in the country, everyone feels very special. It’s been a real boost. It’s been wonderful.’

Nicole Richie Regrets Sticking Her ‘Hand Inside A Cow’ On ‘The Simple Life’: It Was ‘Horrific’ — Watch