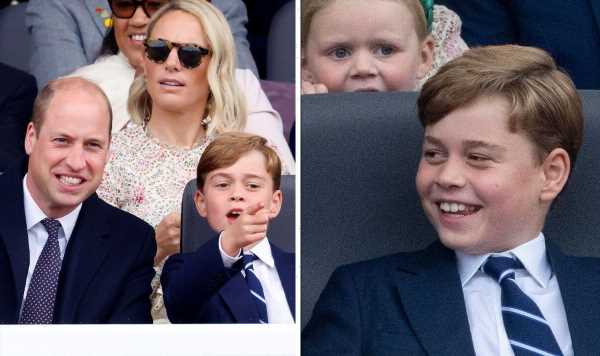 George, his sister, Charlotte, and his brother, Louis, were, in many ways, the members of the Royal Family who stood out the most during the Platinum Jubilee celebrations. Their facial expressions were a sight to behold, and George seemed to lead the way for his younger siblings.

When Charles, William, and George – the three heirs – stood on the Buckingham Palace balcony on the final day of the Jubilee celebrations, it was clear George had already started to mimic his father.

Body language expert Judi James noted: “William seems to have made himself the perfect role model for his eldest son and heir, carefully coaching him in a very hands-on way to the point where George not only dresses like his father, he also mirrors his body language.

“In many ways, we saw George growing up in front of our eyes over the Jubilee weekend.

“Looking reserved and shy on his first appearance, he grew to the point where he was not only taking his dad’s lead, but actually leading and prompting William at one point.”

The body language expert continued: “As the royal coach rolled up to the royal box, it was George jumping to his feet and buttoning his jacket before prompting his dad to do the same.

“This suggests a certain eagerness to embrace his destiny rather than a desire to either rebel against it or see it as an intolerable burden.”

This also suggested George has already grown a little from the shy and uncertain boy the public saw when he went to watch the Six Nations rugby game at Twickenham stadium earlier this year.

At the time, the eight-year-old didn’t seem to be smiling much and was half-hidden behind his parents.

Over the weekend, the young Prince was confident and more of his personality seemed to shine through.

Referring to the final day, when the three heirs and the Queen stood on the balcony, Judi said: “William’s pride in his son showed in the way he steered him in beside the Queen for the final balcony appearance, and he was rewarded by George’s beaming smile at his grandmother when she singled him out for a brief chat.

“Even the way George stands in the royal box with his hands on his hips signals growing confidence, although he happily also shows signs of a lack of any arrogance when it comes to accepting help or advice.”

Judi went on to note how George still acts as a child, as he should, despite this new confidence.

She said: “He will still happily hold his father’s hand, and when his younger sister Charlotte nudged him to keep his arms straight at his sides during the anthem when they stood on the balcony, he happily complied.

“George’s body language suggests he is a playful boy who enjoys the sense of freedom his parents have carefully encouraged, but he also seems to be taking his royal duties seriously and trying hard to get all the protocol right.

“Like his father, he blends signals of shyness with moments of growing confidence.”

The body language expert added: “The way that he is beginning to take the lead rather than just follow suggests a potential for leadership that his grandmother has always excelled in.”

Many royal fans took to social media over the weekend to praise Prince George for his behaviour, and some shared their favourite moments.

Twitter user Chris Jackson posted a photo of George smiling at the Queen on the balcony on the last day, saying: “In memorable few days filled with lovely moments this was definitely up there with the best of them.”(sic)

Commenting on the same picture, @divageraldine1 said: “It’s proof of a real, true, bond. And he’s old enough now to have a concept that she’s important not just in his life, but in many. Kids don’t fake it. I love this picture.”

Deborah Moses added: “Prince George definitely has a look of Diana there, a beautiful photo and moment.”

Diary of an air hostess: Anguished families keep begging her for help