Prominent Melbourne lawyer Peter Bartlett said he was thanked by the Prime Minister’s office for advising Attorney-General Christian Porter over his defence of a rape allegation and told his colleagues the federal government was one of their law firm’s biggest clients.

The firm, MinterEllison, is divided after its chief executive Annette Kimmitt sent an email last Wednesday to more than 2000 staff suggesting the firm had erred in taking on Mr Porter as a client, saying it had “triggered hurt” for her and apologising for “causing hurt” to staff. 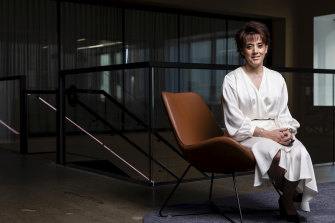 Mr Bartlett hit back in an email to staff the same day defending his position, citing the Prime Minister’s office’s phone call and saying of Scott Morrison and Mr Porter: “These are the leaders of one of the firm’s largest clients.”

The Age and The Sydney Morning Herald have confirmed that MinterEllison is working on $93 million of government contracts, and one source within the firm said on condition of anonymity that some in the firm feared the handling of the controversy could threaten the lucrative relationship with the government.

Mr Bartlett’s email said he had previously worked with many corporate and employment clients over the years to protect them from media exposure, some who had been accused of harassment “and more”.

“I have advised many federal and state ministers, premiers and prime ministers from both parties. This week I received a call from the PM’s office thanking me for trying to assist the AG,” the email reads. “With the claims against the AG, I would have thought that a majority of our partners would believe that everyone is entitled to a presumption of innocence and legal representation.” 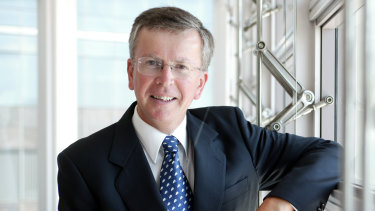 The internal stoush began last week after Mr Bartlett was identified by the ABC as having advised the then unnamed Mr Porter as he prepared to go public to out himself as the cabinet minister accused of a 1988 rape. Mr Porter denied the allegation in the press conference last Wednesday afternoon.

Younger partners are said to be supportive of Ms Kimmitt’s email, which was aimed at protecting staff wellbeing, while others were shocked at its open criticism of their senior colleague and the suggestion the firm should not act for Mr Porter.

One lawyer at the firm said on Monday they were worried Ms Kimmitt’s position would upset the government as MinterEllison represents dozens of agencies and departments from the attorney-general and tax office to immigration and defence.

The specifics of Mr Bartlett’s advice to Mr Porter are not known.

The veteran lawyer, who has served on the firm’s board for more than two decades, provides legal advice to media companies, including The Age and The Sydney Morning Herald, in order to protect them from defamation. He also advises corporate and government clients on reputational issues, and is known for his negotiation and mediation skills.

Mr Bartlett said in the email to the MinterEllison partners Mr Porter was “fully aware” he couldn’t act against a mainstream media company in any defamation lawsuit because of the conflict of interest.

“Normally in such matters I’m working behind the scenes. It came as a shock to me and the AG late yesterday when my name appeared in the media,” he said.

In Ms Kimmitt’s all-staff email, first made public by the Australian Financial Review , the MinterEllison boss apologised for the pain staff may be feeling.

“The nature of this matter is clearly causing hurt to some of you, and it has certainly triggered hurt for me. I know that for many it may be a tough day, and I want to apologise for the pain you may be experiencing,” she wrote, saying staff could seek counselling from the Employee Assistance Program or speak to her or their manager.

Ms Kimmitt said she only found out about Mr Bartlett’s involvement through the media.

Mr Bartlett responded to her criticism on the same day. He said in the email, parts of which were first reported by The Australian last week, that he was “still coming to grips with the emails from Annette to all staff and all partners … I think you are entitled to the background”.

He said had been working for Mr Morrison in a defamation matter and then, in October last year, at the Prime Minister’s recommendation, received instructions from Mr Porter over some “defamatory posts” on a YouTube channel.

He said Mr Porter later sought advice from him about how to respond to questions raised by the ABC’s Four Corners program last year. Mr Porter contacted him again after the ABC broke the story that a rape allegation had been made against a current federal minister.

The MinterEllison board is expected to meet this week.

“The situation is untenable,” a senior lawyer said.

A well-known senior lawyer at another firm, who requested not to be identified, said beyond managing the potential conflict, advising the Attorney-General would be a coup.

“It’s surprising their CEO sees it as such an issue,” they said. “It doesn’t strike me as such a controversial thing.”

Sydney University law Professor Ben Saul said the issue was more a question about whether the firm’s internal procedures were followed, rather than an ethical question.

“There’s nothing wrongful about taking Mr Porter as a client, it’s more a question of how they position themselves and what their procedures are,” Professor Saul said.

Ms Kimmitt said in her email that “acceptance of this matter did not go through the firm’s due consultation or approval processes” and had it done so, “we would have considered the matter through the lens of our purpose and our values”.

Professor Saul said law firms can decide what clients they take on, and what kinds of matters.

Mr Bartlett and a spokeswoman for MinterEllison declined to comment, while Ms Kimmitt did not return a request for a response.

How to clean your garden furniture: Lynsey Crombie Queen of Clean on This Morning today
Entertainment