Photos show deterioration in woman with Alzheimers after lockdown

A heartbroken daughter has revealed how her mother’s health rapidly deteriorated after she was placed into a care home permanently over lockdown.

Karen Rogers, from Plymouth, had put her mother, Marion, who has Alzheimer’s, in a care home temporarily for respite, before her planned move to an assisted living flat with carers.

However because of lockdown, Marion was stuck at the home, unable to have any in-person contact with her family and Karen told how her mother became angry and confused, feeling like a ‘caged animal’.

Appearing on This Morning today, Karen shared photos taken six months apart, which show how drastically Marion’s health has deteriorated over lockdown and teared up she described her mother’s devastating story. 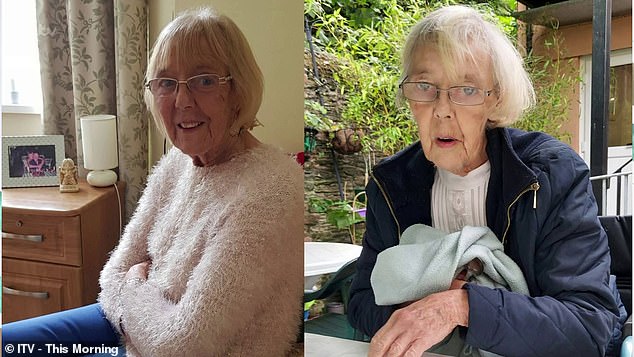 Heartbreaking photos taken six-months apart show Marion, who has Alzheimers, before (left) and after lockdown (right) after she was left in a care home with no contact from family members 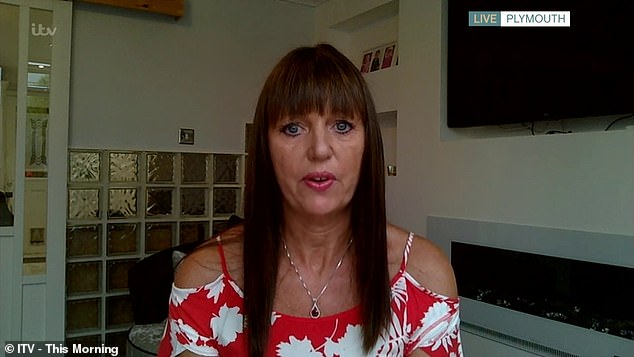 Karen Rogers, from Plymouth, appeared on This Morning today to tell she had placed her mother Marion in a care home temporary for respite before moving her to extra care accommodation

‘She was very family oriented’, said Karen, ‘She wanted family around her all the time, we had her covered. Most of the time she had carers coming in, every day she would have clubs or see a member of the family.

‘But then she had to go into a care home for respite, temporarily we thought at the time, we thought it was temporary and then lockdown happened.’

Marion didn’t want to go into a care home, but after an incident which left her distressed in the street, her family had placed her there for her safety,  while they could find her some permanent sheltered accommodation.

‘Initially she was in respite’, said Karen, ‘So she could go into extra care accommodation which is a flat with carers 24/7. 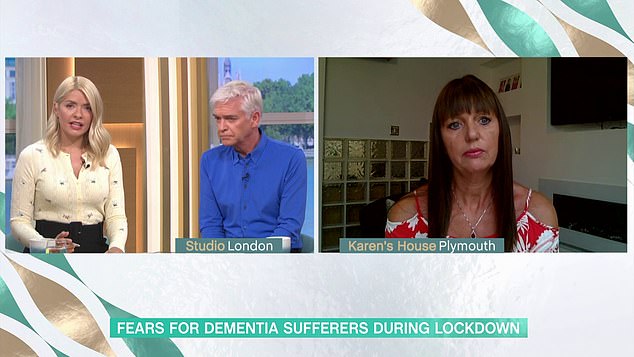 Karen told hosts Holly Willoughby and Philip Schofield (both pictured) how her mother became angry and confused in the home, feeling like a ‘caged animal’

‘She could do everything she wanted to, but would be safe and cared for, but then lockdown happened and she couldn’t do that anymore.’

Lockdown restrictions meant no family members were able to physically visit Marion, but Karen told she was able to visit her mother through a window.

Karen says her mother’s health ‘deteriorated quickly’, and she soon began ‘hitting out’, because she was confused about having no visits and being unable to leave the house.

‘She deteriorated quickly, she didn’t understand why she could no longer go out and do her clubs, said Karen.

‘She got very angry, she didn’t understand, she started getting a bit aggressive, she felt like a caged animal, she used to hit out and it was awful to see.

‘I could just do window visits and then because of the way she was behaving, they had to move her to a care home who could cope with her behaviour a bit better.

‘I understand why, but it was horrible in lockdown.’

WHAT IS DEMENTIA? THE KILLER DISEASE THAT ROBS SUFFERERS OF THEIR MEMORIES

Dementia is an umbrella term used to describe a range of progressive neurological disorders (those affecting the brain) which impact memory, thinking and behaviour.

There are many different types of dementia, of which Alzheimer’s disease is the most common.

Some people may have a combination of types of dementia.

Regardless of which type is diagnosed, each person will experience their dementia in their own unique way.

Dementia is a global concern but it is most often seen in wealthier countries, where people are likely to live into very old age.

HOW MANY PEOPLE ARE AFFECTED?

The Alzheimer’s Society reports there are more than 850,000 people living with dementia in the UK today, of which more than 500,000 have Alzheimer’s.

It is estimated that the number of people living with dementia in the UK by 2025 will rise to over 1 million.

In the US, it’s estimated there are 5.5 million Alzheimer’s sufferers. A similar percentage rise is expected in the coming years.

As a person’s age increases, so does the risk of them developing dementia.

Rates of diagnosis are improving but many people with dementia are thought to still be undiagnosed.

IS THERE A CURE?

Currently there is no cure for dementia.

But new drugs can slow down its progression and the earlier it is spotted the more effective treatments are.

As restrictions eased, Karen and her family were able to visit Marion in the care home’s garden wearing masks from a safe social distance, but called one of her visits ‘heartbreaking’, as she wasn’t able to hug her mother, or comfort her while she cried.

She said: ‘Initially it was window visits in the care home and things got easier when we had our first garden visit.

‘But she didn’t understand, she wanted to give a hug she wanted to leave with us and it was heartbreaking. There was one visit, she was crying and I couldn’t hug her.

Karen began to tear up as she went on: ‘All I could do was give her a tissue, she didn’t know what to do with the tissue she was playing with it, it was heartbreaking.After that visit I got outside and cried my eyes out’.

Government rules now state that families have to follow the circumstances of the individual care home, but should be limited to a single constant visitor, per resident. 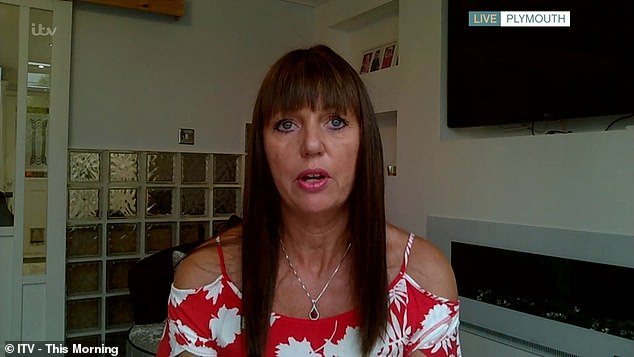 Karen told her mother’s health ‘deteriorated quickly’, and she soon began ‘hitting out’ as she was confused about having no visits and being unable to leave the house 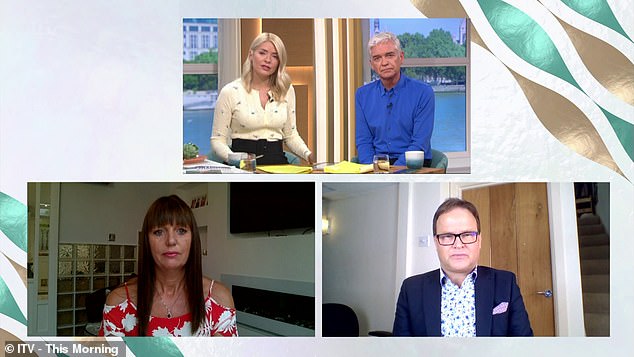 Karen insisted that she places no blame on the care homes or the carers, but has called on the government to realise the effect that restrictions have on elderly residence

Karen insisted that she places no blame on the care homes or the carers, but has called on the government to acknowledge the effect restrictions have had on care home residents, insisting they need to ‘know they haven’t been forgotten’.

‘Why can’t one family member go in? Get checked, have PPE. They need physical contact and to know they haven’t been forgotten.

‘ I’m not knocking carers, but why can carers who have been mixing with other people when they’re not working have physical contact.’