PETER OBORNE: Has Boris Johnson’s high wire strategy for Brexit just got trickier after the defeat of Nigel Farage’s party in the Peterborough election? 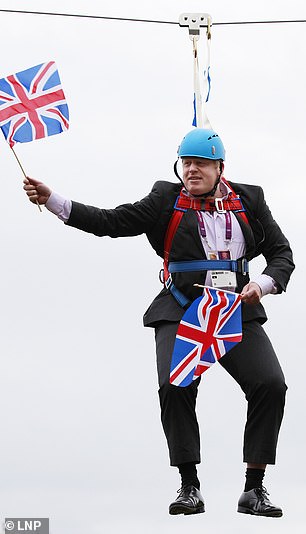 Hanging out: Boris Johnson dangles from a zip line in 2012

Not for the first time, the pundits were proved hopelessly wrong. They predicted Thursday’s by-election in Peterborough would be a coronation for Brexit Party leader Nigel Farage and his millionaire businessman candidate Mike Greene.

Practically every factor had played in Farage’s favour.

Above all, the by-election took place as the Brexit Party was still celebrating its seismic victory in the European Parliament elections — coming first with 32 per cent of the national vote and seizing 29 seats.

According to a YouGov survey this week, it also had a six-point lead nationally — on 26 per cent, with Labour and the Lib Dems tied on 20 per cent and the Tories struggling with 18 per cent.

Peterborough, too, is a strongly pro-Brexit constituency, having voted 60 per cent in favour of Leave at the 2016 referendum.

Other advantages included the fact that voters see the Tories as rudderless, with a lame duck prime minister who has failed to deliver Brexit.

And, as for the Labour Party, its record locally was a disgrace, considering that the by-election had been called because its MP had been sent to prison for perverting the course of justice by lying to police, its Brexit policy is all at sea, and its candidate in the city had been accused of repellent anti-Semitism.

No wonder Farage was confident before the count — particularly as protest parties such as his normally perform well in by-elections.

But, despite all the cards stacked in his favour, he didn’t win. 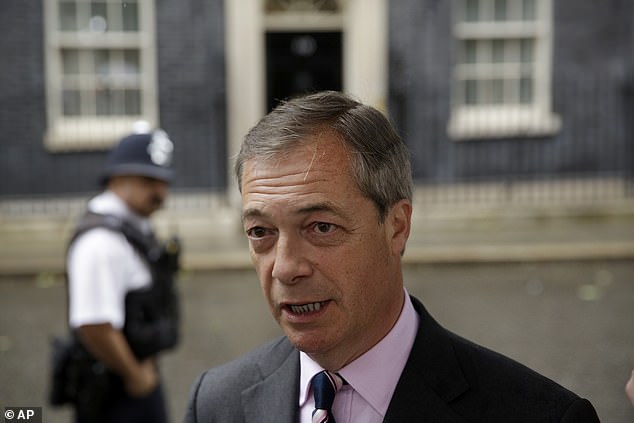 Practically every factor had played in Farage’s favour, but the Brexit Party did not win the Peterborough by-election

The result shows that — Brexit or no Brexit — there is still life in the two main parties.

Labour won the seat and the Tories came third, rather than fifth (behind the Greens) as they did in last month’s European elections.

Much more significant than the setback for the nascent Brexit Party is the effect the Peterborough result will have on the Tory leadership election, which formally got under way yesterday with the official resignation of Theresa May as party leader after 1,059 days in charge.

According to those pundits who wrongly predicted a Farage triumph in Peterborough, Boris Johnson is on course to win.

True, he’s the favourite. And I have no doubt that voters who want a hard Brexit will back the man they see as the only politician with the willpower and personality to take Britain out of the EU with a deal or with No Deal. But fellow hard Brexiteer Farage’s failure on Thursday means that shrewder observers believe Johnson’s chances have been slightly dented.

Of course, countless people are fed up with the paralysis in Westminster and angry at politicians’ failure to fulfil their promise to deliver Brexit.

But, as Labour’s winning candidate in Peterborough has proved, there are a host of other issues that people care about — such as austerity, crime and the NHS. 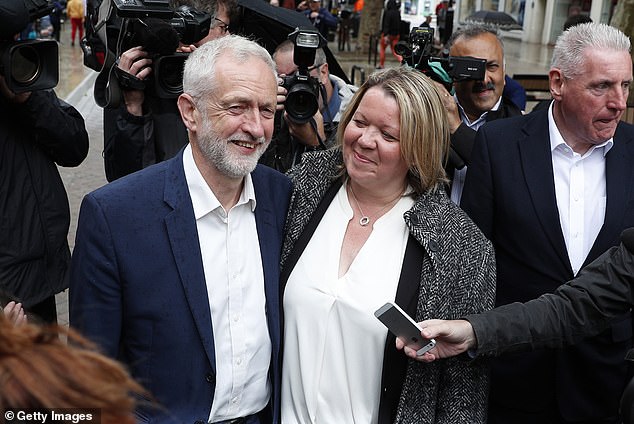 Lisa Forbes saw off the competition from Farage’s new party, which shows how people care about a host of issues other than Brexit

This week’s depressing news that Ford’s engine plant in Bridgend is to close with the loss of 1,700 jobs provided ammunition for those who believe that the country risks industrial chaos if we leave the EU without a deal — which is something Mr Johnson is happy to countenance if he becomes PM.

This is why I’m convinced that those Tory leadership candidates with the most pragmatic attitude towards Brexit — such as Jeremy Hunt, Rory Stewart and Michael Gove — should feel buoyed this weekend.

This is the view, too, of the Tory peer and pollster Lord Hayward who says that ‘swing voters’ — those who don’t always vote for the same party and whose decisions are difficult to predict — in Tory heartland areas such as the Home Counties are being put off by Mr Johnson’s trenchant views.

Lord Hayward thinks that the Conservatives face ‘destruction’ if they appeal to Brexiteers without winning the support of floating voters.

He also draws a distinction between hardcore Tory activists, many of whom would be elated with a No Deal Brexit, and the silent majority of calmer Conservative voters who are much more aware of the dangers.

The respected pollster’s views are an important corrective to a poll reported yesterday in a Johnson-supporting national newspaper which claimed he is the best-placed leadership candidate to gain the support of voters currently backing the Brexit Party and Ukip and the most likely to overcome Jeremy Corbyn.

However, it must be noted that the survey was carried out by the political consultancy CTF, which is run by Boris’s strategist Lynton Crosby and which has donated money to his campaign.

Meanwhile, there are intriguing signs from Brussels that suggest Johnson’s high-wire ‘Brexit at all costs’ strategy may not be necessary. While the deal Mrs May got from Brussels — but failed to push through the Commons — cannot be changed, there could be some flexibility over the pivotal issue of the Irish backstop.

EU negotiators might contemplate a new timetable under which certain restrictions could be removed gradually as post-Brexit trade talks progressed.

The prospect of a Tory government under a new PM achieving Brexit should distress Jeremy Corbyn, despite the smile on his face yesterday after his success in Peterborough.

As we look at the pendulum of politics this weekend, there have been several ups and downs.

Jeremy Corbyn up (a bit). Nigel Farage down. Boris Johnson, the supposed Tory antidote to Farage, down a fraction, too.

And, despite their party winning only 21 per cent of the vote in Peterborough, wiser Tories such as Jeremy Hunt and Rory Stewart should be a lot happier today. 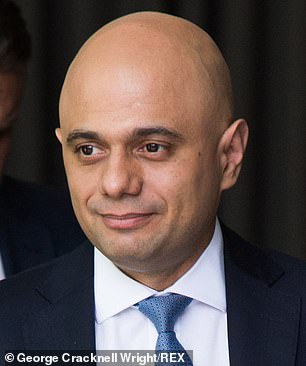 This is a question that has been asked by Harun Khan, secretary general of the Muslim Council of Britain.

He wonders if Mr Javid was not invited because his Muslim heritage might have offended Trump, who issued executive orders temporarily banning people from seven mainly Muslim countries from entering America.

Certainly, Trump demonstrated hostility to London mayor Sadiq Khan, describing him as a ‘stone cold loser who should focus on crime’ and who had ‘done a terrible job’.

It would be shameful if Theresa May approved any snub to Mr Javid so as to pander to the prejudice of the U.S. President.

It has been a tough week for Theresa May in her last days as Prime Minister. Yet she has conducted herself with enormous poise and dignity.

Never more so than when she read out the deeply poignant last letter home of Captain Norman William George Skinner, who died on the beaches of Normandy. I’m sure none of those who are standing to be her replacement could have spoken it so beautifully.

Health Secretary Matt Hancock is an engaging man, but he should watch his language.

During his campaign to become Tory leader, he’s used the words ‘f**k’ and ‘sh*t’.

I imagine he’s done it to attract attention — as youngsters often do. But as 40-year-old Mr Hancock matures he will learn that people expect much better from public servants.