Home » Lifestyle » ‘Our digital lives and our lives are the same now’: New head appointed to ACMI

‘Our digital lives and our lives are the same now’: New head appointed to ACMI

Seb Chan, a highly respected figure in Australia’s museum and gallery scene, has been appointed the director and CEO of ACMI, Australia’s national museum of screen culture. Chan knows the lay of the land well, having worked at the institution for the past seven years, and, as the national president of the Australian Museums and Galleries Association, he also knows the power and potential that museums have.

“We need museums to play an active role in our communities, and they need to be more than they have been,” Chan says. 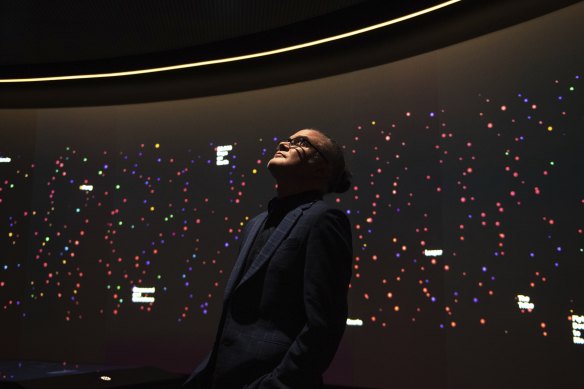 Prior to taking up the role of ACMI’s inaugural chief experience officer in 2015 he was working in New York at the Cooper Hewitt, Smithsonian Design Museum. “Katrina [Sedgwick], our former CEO, lured me back to Australia with a really exciting promise of making something really, really impactful and innovative and new,” he explains.

Over that time, ACMI underwent a $40 million redevelopment which, in addition to changes to their core exhibition and building, saw Chan help with development of the “Lens”, a small cardboard disc that visitors use to keep track of items in the exhibition that capture their interest, and extends the experience beyond their visit and into their homes.

Chan is grateful for Sedgwick’s work, saying, “She’s really helped us get to the position we’re in and I’m so fortunate to be taking over from her with it in such a good place.”

He sees the role of museums such as ACMI as vital in the community, both as meeting places, and for the exchange of ideas. They’re a space for discussion, debate, for imagining different futures. “The cultural sector across every art form has been historically great at helping us imagine different ways of living and different possibilities – and I think the museum of screen culture is perhaps one of the most relevant museum types in the world for doing that very purpose.”

With so much of life lived behind screens he points to the erosion of the line between an online life and “real” life. “People often think of my work in the digital space as being somehow separate to that physical space. But certainly the work here, and also the work in New York was really about asserting that our digital lives, and our lives are one and the same now.”

There’s more to ACMI than what is seen on a first look – in addition to the film festivals, screenings and physical exhibitions there are archives, coworking spaces and an education stream.

Since the beginning of the pandemic, ACMI has seen a huge shift in its audience, moving from mostly tourists to now being mostly local and more culturally diverse. “That’s very exciting,” says Chan. Having an audience focus means that ACMI moves with their crowd. “I think that’s kind of the job of everybody who works in a museum – to diversify everything, to understand what public funding makes possible that running it as a for-profit, commercial business doesn’t.”

So how does ACMI fit in to this change? “Through commissioning,” he replies. “Through supporting artists as a public institution to do things that they otherwise couldn’t do.” He also points to helping create networks, and by furthering representation. “The very first basic step is welcoming more young people in to see themselves represented – to see people from their own communities represented amongst who is on our screens … who is behind our screens, and also behind our keyboards.”

When asked what makes ACMI so vital to Melbourne culture, Chan responds immediately. “Melbourne was the place where the first feature-length film was made,” he says. “We’re the only city in the world that has a museum like us, that celebrates that past, and can be a place to bring people together to continue that long into the future.”