Home » Lifestyle » One hundred days of Dan: how the Victorian premier talked over heads of the journalists One hundred days of Dan: how the Victorian premier talked over heads of the journalists

Daniel Andrews took an oath, swearing on the Bible to tell the truth, the whole truth and nothing but the truth.

It was September 25 and he was on our screens for the second time that day, this time as the final witness at the hotel quarantine inquiry. Earlier, he had been in his accustomed position on the Treasury Theatre stage presiding over another press conference – his 85th in a row. His demeanour in both rooms was similar: calm, confident, in control. 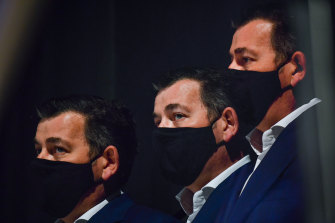 Just after 11am on a midwinter Friday morning 100 days ago, Daniel Andrews entered the darkened rooms of the Treasury Theatre. Camera shutters broke the silence. The Premier strode towards the stage. He looked tired. His voice never faltered, but it was flat. His crown as the premier who had gone hardest on COVID-19, seemingly beating the virus into submission, was beginning to slip.

It was July 3. Victoria had recorded 66 new cases and was on the cusp of its second wave. Ten postcodes had been placed back into stage three lockdown, community transmission was rising and contact tracers were struggling to cope.

Andrews was on state with his then health minister, Jenny Mikakos. He gripped the lectern, and took the first steps in what has turned out to be a marathon. Since then, he has stood under the lights seven days a week. In that period, the number of new infections rose as high as 725 then fell again. Public housing towers WHERE, JUST BRIEFLY, were locked down and reopened, nursing homes infected, then shuttered, then emptied. Mikakos stopped appearing and then quit his ministry. Andrews has been there, every day, for as long as the journalists still had questions to ask. 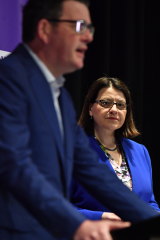 That was then. Daniel Andrews at the first of his 100-day press conferences on July 3, when Jenny Mikakos was still Health Minister.Credit:Joe Armao

Press conferences are generally short and scripted. The Premier, with an entourage of media advisers, will attend to an assembled press pack, deliver the message, answer a few questions, and end the briefing. The short and infrequent nature of media conferences heightens the tension between politicians, who often answer questions by evading the premise of them, and journalists, who yell over each other fearing the briefing will end before they have their chance.

But Andrews has changed the dynamic. The duration and number of consecutive media briefings is unprecedented in political history. The inquisitions have at times lasted for more than 1.5 hours, and have been watched by thousands of citizens. His get-on-the-beers vernacular has been immortalised in memes, and his black North Face jacket has a life of its own. Meanwhile, the journalists asking the questions have been mic'd up and have become, in some cases, as well known and controversial as any politician.

But has Andrews answered the questions? Are the "Daily Dan" briefings a genuine attempt to inform, or are they at at least partly designed as political theatre, to obscure and misdirect?

Dr Denis Muller, a senior research fellow at the Centre for Advancing Journalism at the University of Melbourne, says Andrews is offering “genuine accountability on the issue of the numbers, and genuine accountability … about the restrictions and decision about removing them, and that’s the stuff that matters to the population”.

There is another kind of accountability – being forthright about the government's own actions and failings, including "on the question of the hotel quarantine debacle, and there I think he lost the accountability narrative some weeks ago," Muller says.

“The journalists have been entirely right to push and probe – that’s what they are there to do. Public interest is served when journalists ask those questions even if the public aren’t interested in the answers at the moment."

But this has created significant debate. Should journalists have shifted their mindset and recalibrated their traditional news values to accommodate the nature of a public health crisis?

Program manager of Journalism at RMIT University, Dr Alexandra Wake, says Andrews has successfully adapted his approach to media briefings while the journalists have not. His open-ended appearances have upended the traditional format.

“It’s a smart political move, and he has been using press conferences as a means to talk to the audience. It’s less about journalists in the room … and in my mind, that is a perfectly acceptable and appropriate thing to be doing in a state of emergency and state of disaster,” Dr Wake said.

The animosity between the public and the journalists at the press conference reached its peak on August 6. It was just four days after Melbourne plunged into a strict stage four lockdown and the day after Justice Coate told her inquiry that politicians and department secretaries were free to make public comments about the bungling of the hotel quarantine program.

Journalists began probing Andrews, who for more than a month had avoided answering questions over the scheme that led to a second wave of the coronavirus pandemic which at that point had killed more than 750 people, and infected almost 20,000.

But the fresh inquisition was bad timing. It came just as stage four restrictions had been announced, in all their confusing detail. The public were scared. They were in the dark about key aspects of the lockdown. Businesses were failing, schools were shutting, industries were forced into closure. 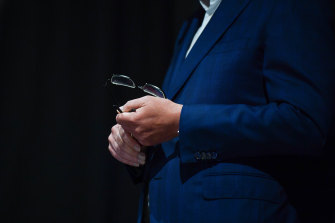 Waiting in the wings.Credit:Joe Armao

Over the 100 press conferences, reporters in the room, including myself at times, have sometimes found the competing imperatives of journalism at odds with one another, and with what the public has wanted from the media. Many journalists have tried simultaneously to hold politicians to account, scrutinise decision-making and extract and report practical public health information. Under normal circumstances, those elements would not have appeared incompatible. But we’re in extraordinary times.

Andrews, says a Labor campaigner who spoke on the condition of anonymity, is arguably the government’s most effective communicator. But he's also a ruthless political animal. His decision to pursue the mammoth press conference strategy is largely political, the campaigner says – one designed to project an image of strength, determination and commitment. 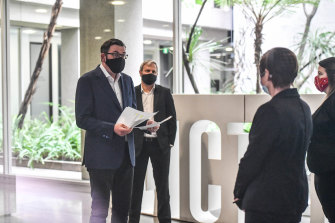 “He wants the public to understand that,” the Labor source says. “What it’s demonstrated is that he is determined, he is unrelenting. Right or wrong he will act in accordance with what he believes is the side of his political persona that he wants the community to see."

But, said this insider, there has been a downside.

“The press conferences became indulgent by him and journalists. At the end of the day, everyone was spending hours to get an eight second grab. If only the amount of time that he had stood up at press conferences, he had spent on scrutiny of the hotel quarantine program.”

Paul Strangio, an associate professor of politics at Monash University, says the hotel quarantine inquiry has laid bare the mess of the Victorian bureaucracy and the Andrews government, painting a picture at odds with the Premier’s reputation as someone who is assertive, in charge, across key elements, highly competent, and with an eye for detail. 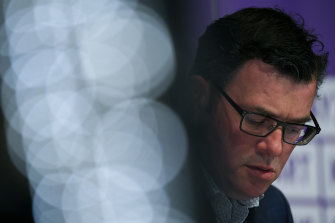 According to Strangio, it’s been “a very personally bruising event for Andrews and one that challenges his own self-identity as a highly competent and effective premier who’s leading an equally effective and strong government,” Strangio says.

As for the press conferences, whether they have offered accountability is, says Strangio, “eye of the beholder”.

“There’s an element of that by standing up every day for the last 100 days, he’s making atonement, making amends. He’s also sending a signal of taking command, taking control, showing strength.”

Whether the public forgive Andrews for his sins, a Labor source says, won’t be known until election day. And that's two years away.

My Best Friend Is Gone, and Nothing Feels Right