Home » Lifestyle » ‘Once I get the hospital, I’ll happily retire’: Liberals defend rural heartland against independent

‘Once I get the hospital, I’ll happily retire’: Liberals defend rural heartland against independent

For 46 years, the rural seat of Benambra in the far north-east of the state has been held by the Liberal Party, and before that by conservatives all the way back to its formation in 1877.

But at this election, that long pedigree and the position of incumbent Liberal MP Bill Tilley are under threat from a candidate who insists she is not a “teal”. 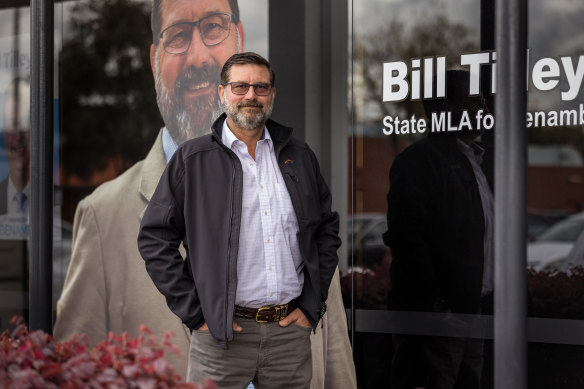 Bill Tilley, the local member for Benambra, outside his office in Wodonga.Credit:Jason Robins

“I’m a yellow independent candidate,” says Jacqui Hawkins, who is contesting Benambra for the second time. “What is a teal? I ran in 2018 before the term ‘teal’ even existed.”

Polling suggests independent Hawkins has a fighting chance in the 9000-square-kilometre electorate, part of the federal seat of Indi, which fell into independent hands in 2013 and has remained there since.

As for policies, she and Tilley are focused on the same thing: a new single-site hospital to serve the fast-growing community. The difference is their belief in who is best placed to deliver it. Currently, residents of Benambra and their doctors split their health care between the Victorian and the NSW sides of the border. 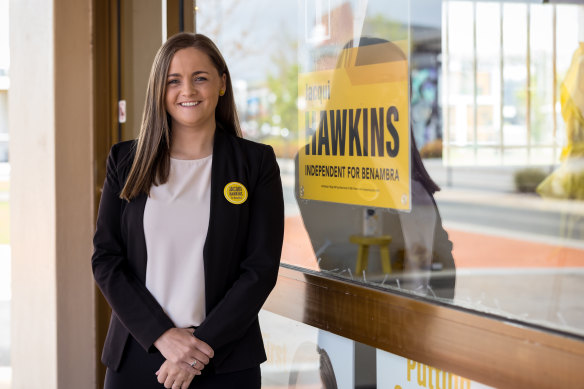 Jacqui Hawkins, an independent, is challenging for the seat.Credit:Jason Robins

The Liberal Party has already committed $300 million towards a new hospital, or one-third of the final expense, relying for the rest on support from NSW and the Commonwealth. The Labor government has not committed to funding the new hospital but Health Minister Mary-Anne Thomas said there were still six weeks of the campaign and many announcements to come.

“Once I get the hospital, I’ll happily retire,” said Tilley, who enters the campaign with a 2 per cent lead, the benefits of incumbency, and his position as shadow minister for border communities, decentralisation, and boating and fishing. “But if you want the hospital, vote Bill Tilley, it’s the only way you’ll get it.”

He believes you have to belong to a major party to make a difference, and argues his 16 years as the local member gives him the experience to secure the facility. “If Jacqui Hawkins wins, that will set the campaign back years,” Tilley told The Age in Wodonga on Tuesday.

Hawkins, 31, sees a different picture: Tilley has had 16 years in power to deliver, and has so far failed: “The report card’s there for everyone to see.”

Albury-Wodonga Health, which is jointly funded by Victoria and NSW, is advocating for a new single site and a dramatic increase in surgical, recovery and theatre beds because the population is ageing and expected to grow 30 per cent by 2036.

Selina Moon, who lives on the outskirts of Albury, told The Age the hospital system seemed crowded and underfunded when she gave birth in Wodonga two years ago.

Andrea, a retail store manager in Corryong, about a 90-minute drive away, who did not want her surname published, agreed health and the lack of general practitioners was the biggest issue facing the town. Housing them, though, would be a problem.

“I don’t even go to the doctor here, I go to another town … We don’t have homes, we don’t have rentals. To bring the right doctors up here, they need somewhere to live.”

Wodonga resident Terry Irvine told The Age he was concerned the regions were paying for policies that only benefit Melbourne, and politicians were “rorting” the system while doing “f— all” for the community.

Polling of the seat by RedBridge and paid for by Climate 200, the fundraising vehicle bankrolling some independents, suggests Tilley’s primary vote has dropped from 40 per cent since the last election.

Single seat polling is not necessarily indicative of the outcome because the sample sizes tend to be small. However, RedBridge director and former Labor strategist Kos Samaras said a lower primary vote could make it difficult for Tilley to win.

Climate 200 funded the polling on its own and Hawkins said she declined their support, despite shared interests in the environment and integrity.

The poll also showed Hawkins suffers from a lack of recognition, with about 60 per cent of people saying they had not heard of her. If she won, she would be the first woman to hold the seat.

The poll suggested cost of living was the biggest priority for local voters, followed by health, climate change or the environment, and integrity. Vaccine mandates and lockdowns also came up in a community split in two by COVID-19 border closures. In a wet season with plenty of potholes, road maintenance was also an issue.

The Upper Murray is still recovering from the devastating 2019-2020 bushfire season, and locals say young men have suicided. Rivers were breaching their cap this week under heavy rain.

Hawkins takes her yellow branding seriously: she wears yellow earrings when she sits down with The Age in Wodonga on Monday and her campaign office, which her volunteers now call “the hive”, is brimming with yellow, including the kitchen sink.

She’s worked for independents such as Cathy McGowan, in bushfire recovery, regional tourism, and manufacturing, after growing up on a farm south of Wodonga at Staghorn Flat.

Tilley — a volunteer in the Country Fire Authority and former member of Victoria Police and the Australian Army — said he has always acted with integrity for his electorate, and sees himself as independent.

“I wear the company colours [of the Liberal Party], but I’m a franchisee, and the franchisee fights frequently with the franchisor,” Tilley said. “If I walk down the street [when he retires], hopefully people can say ‘thanks Bill, you did your best’, and not punch me in the face.”