Funny? There has to be a stronger word? Funny? If I wasn't sitting down, I'd have fallen over. I mean, at one point I was crying. Playwright Dario Fo is the master of the art of silliness, the veneer of his child-like humour thinly veiling the steel-capped boot with which he delights kicking the groin of authority in all its guises. 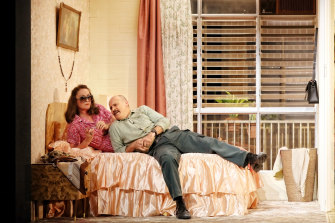 Helen Thomson and Glenn Hazeldine in STC’s No Pay? No Way!Credit:Prudence Upton

His beloved Sotto Paga! Non Si Paga! (which, in this adaptation by Marieke Hardy, becomes No Pay? No Way! rather than its usual Can't Pay! Won't Pay!) was such a call to arms in 1974 Italy that people mimicked its action, and looted the supermarkets. That would never happen in staid old Oz. Here we let the banks, insurance companies, oil companies, utilities, big retailers, rich restaurateurs, toll companies and government all fleece us, and we grumble, but never riot.

Fo's heroic crazies aren't so meek. When the prices double, the jobs dry up and the eviction notices arrive, they revolt. Antonia (Helen Thomson) is among an angry mob of women which loots a price-gouging supermarket, because it's the only way she can put food on the table – even if what she chooses to "liberate" from the shelves is somewhat eccentric. (Dogfood, anyone?) When news of the looting reaches her husband, Giovanni (Glenn Hazeldine), he declares he would divorce a wife who was involved. But then he collides with his own tolerance limit for oppression, and rewrites his moral code accordingly. 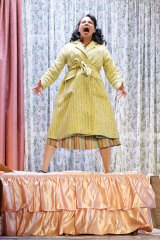 This is the wonder of Fo: while you're falling about laughing, he's giving you a pep-talk in fighting back against those lining their pockets at our expense – and Hardy can't resist pointing fingers in modern-day Oz, even if the setting remains last-century Italy. When the cast sings Bella Ciao at the end, we should be itching to link arms, storm down to Canberra and vaporise the rorting bastards with our withering glares.

Yet somehow we don't. Partly it's good old Oz apathy, and partly it's the production, which not only doesn't stir us up quite enough, but also is not as consistently funny as it should be. At their worst the writing and performances descend to the level of a very ordinary sit-com, and even in the world of Fo's extreme zaniness, the humour would sometimes benefit from less overt mugging and milking of laughs. Then after the interval comes a lumpy, almost leaden period of manic activity for precious little pay-off. I suspect it needs a cut, but the cast may iron it out during the run.

More often, however, director Sarah Giles maximises the frenzy of laughs. Charles Davis' block-of-bland-flats set raises a smile all by itself, and that's before it starts performing such revolving and flying tricks as provoke spontaneous applause. Giles is at her very best choreographing the hilarious farce scene with the closet, the copper and the coffin, and in fact the physical comedy pulverises the verbal sparring most of the time. While notable contributions come from Hazeldine and Catherine Van-Davies (as Margherita, whose husband Luigi is entertainingly played by Rahel Romahn), Aaron Tsindos steals the show in this regard. Among four roles he hits peak form as the police inspector hot on the trail of the looted goods. Tsindos inhabits this bumptious twerp with a Cleese-like combination of grandeur and absurdity, and we watch in stitches as he sets the bar spectacularly low for male ignorance of female bodies.