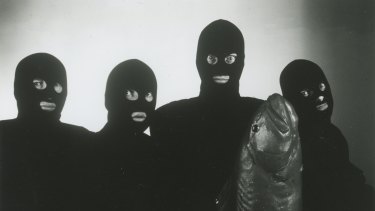 TISM are reforming for the Good Things music festival.Credit:

Featuring seven members on stage, TISM has a legendary cult following grown from the mid-1980s when they started to play live, and reaching a broader audience with the release of 1988’s debut album Great Truckin’ Songs of the Renaissance.

Always masked and using provocative pseudonyms, TISM went on to release five more studio albums, played pubs and festivals around Australia, and won two ARIA awards from six nominations. However, it’s the past 19 years, according to singer Ron Hitler-Barassi, that he’s most proud of so far.

“This 19 years of silence on our behalf, has actually been an art event,” he said. “We produce no music, we do not meet or talk to each other, we don’t play live and nobody thinks about TISM at all. I think it’s been our greatest achievement, and I know many of our critics do as well.” 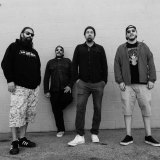 Good Things will take place in Melbourne, Sydney and Brisbane in December and feature international acts Bring Me The Horizon, Deftones, Lacuna Coil and Soulfly alongside Australian bands Regurgitator, Cosmic Psychos, Kisschasy and more. Catering mostly to fans of rock, metal and punk music, Good Things was first held in 2018.

Humphrey B. Flaubert, percussionist, singer and founding member of TISM, said “great art takes a long time to ferment”, and while pleased about the upcoming shows, he stressed people should not be overly nostalgic about the past.

“It’s important … particularly in the difficult times everyone has been enduring, to break our art event silence [and] point out that things weren’t actually that good, all those years ago. And we’re here as proof.”

Flaubert suggested “pretty much everything we’ve released” could be controversial if played live in 2022, while Hitler-Barassi said “the silence was safer” and the band was embracing a new style of music for their upcoming shows.

“We’re introducing a new genre, KDRB,” he said. “The young people aren’t into it as much as we are, but it’s Knock Down Re-Build, and our shows will mainly be financial advice.

“If you’re on your third investment property, like we are, then music and costumes, it’s trivial compared to interest rates, mortgages. We’re exploring new art forms and with Knock Down Re-Build, our new genre … there’ll be no new music.”

‘TISM couldn’t possibly supply anything of value to modern music.’

TISM’s traditionally high-energy show, complete with matching costumes, dancers and a mix of electronic and alternative rock, is also set for a shake-up, according to Hitler-Barassi.

“For the old fans, they’ll appreciate the liturgical dance reinterpretations of the classic numbers,” he said. “We’ve found religion … and when people come to our shows, there’ll be some bearded guys looking groovy and someone wearing a beanie. There’s nothing suspicious about this. Like all religious organisations, you can trust us.”

Flaubert says this is not the renaissance of TISM.

“I need a new kitchen,” he said, adding that “TISM couldn’t possibly supply anything of value to modern music, even if it understood what modern music was about”.

Good Things is at Flemington Racecourse in Melbourne on December 2; Centennial Park in Sydney on December 3; and Brisbane Showgrounds on December 4.

Our neighbour built an extension touching our home… now we have to pay HER £130,000 and she can keep it up | The Sun
Entertainment