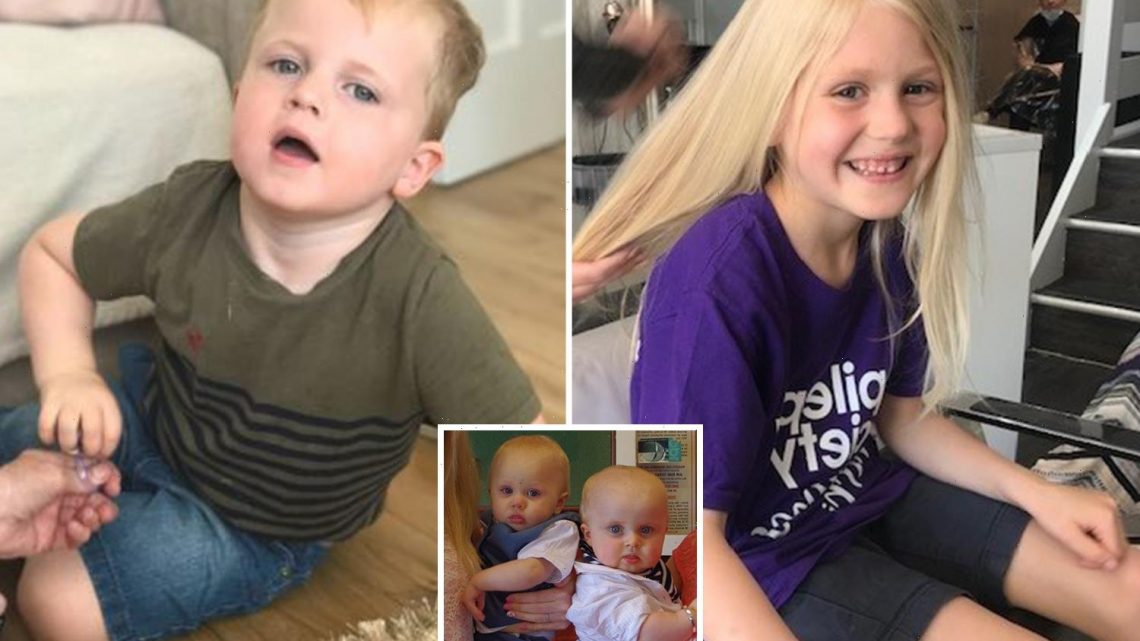 IT was a very special moment for Kaylea Pharoah when she made the first cut of seven-year-old Thomas Machell’s long, blonde hair.

For the last three years Thomas has been growing his beautiful locks in memory of Kaylea’s own little boy, William, who died of Sudden Unexpected Death in Epilepsy (SUDEP) in December 2018 aged just four. 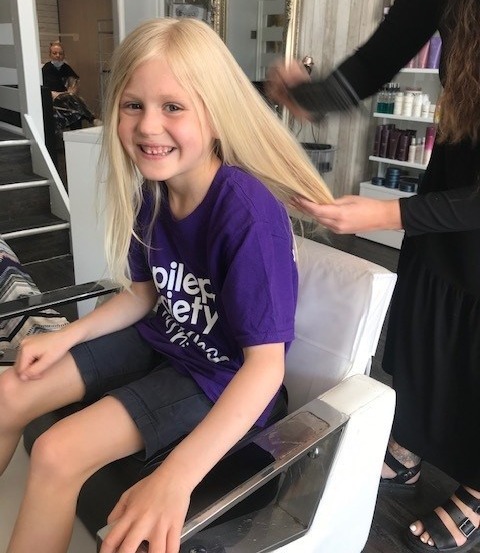 William and Thomas were born just hours apart in the same hospital near their home in Barrow-in-Furness, Cumbria.

Kaylea and Thomas’s mum, Salli, are second cousins, and had joked during their pregnancies that they’d end up delivering their babies at the same time.

“At 10 months William was diagnosed with a rare genetic disorder and epilepsy, meaning he’d often have up to 40 seizures a day, but he and Thomas were always so close,” said Kaylea.

“Thomas was always the kindest, most thoughtful little boy, and losing William hit him so hard. I remember him coming up to me at the wake to give me a hug.”

Just after William passed away, Thomas was watching Children In Need with his family, and saw a little girl getting her long locks cut off to make a wig for children with cancer and also raise money for charity.

“He said he wanted to do it for William’s Warriors, the fundraising group set up by William’s family after his death to raise money for Epilepsy Society.

"We were just blown away that a four-year-old could be so thoughtful.” 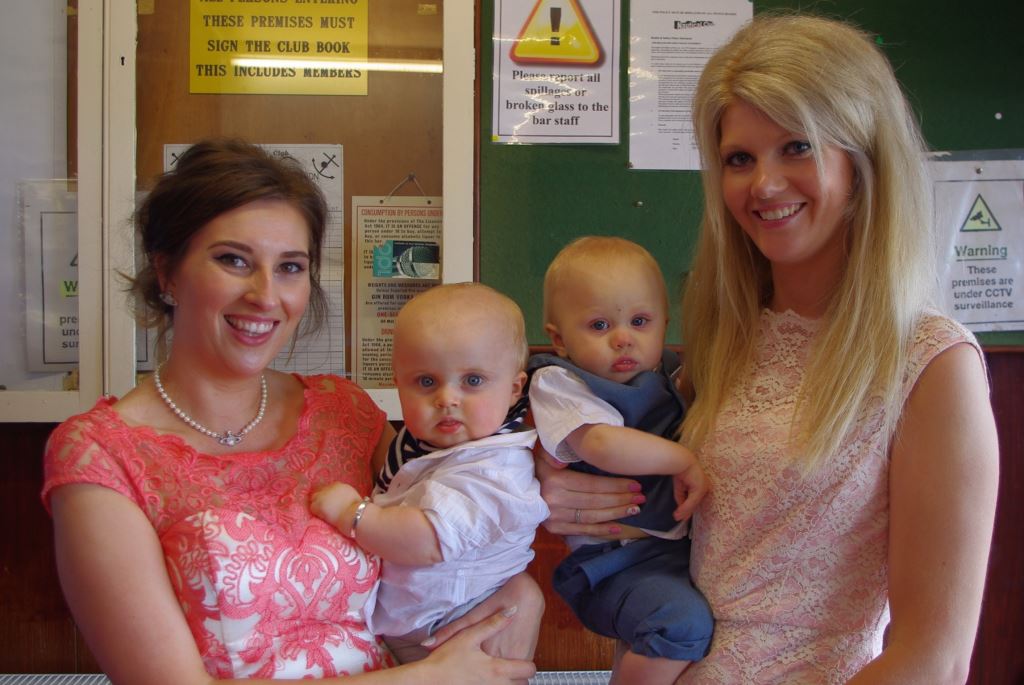 What is Sudden Unexpected Death in Epilepsy (SUDEP)?

Sudden Unexpected Death in Epilepsy is connected with seizures and in particular Tonic Clonic seizures.

Experts say there is no one particular cause for SUDEP but said that it could have links to heart rate and breathing.

SUDEP is a rare condition and is estimated to effect around 1 in 1,000 adults with epilepsy each year.

The risk is greater or less depending on the amount of seizures a patient has and how well they can be controlled.

Research has show that Tonic Clonic Seizures put a patient at greater risk of SUDEP.

A Tonic Clonic Seizure can affect both sides of the brain from the start of the seizure.

You are also more at risk of SUDEP if you have night seizures and if you aren't taking your epilepsy medication on a regular basis.

Salli told the head and Thomas’s teacher at Chetwynde School – where he is now about to go into Year 3 – and said they could not have been more supportive.

“Each passing month when people mistook him for a girl, we thought Thomas would give up, but he said he couldn’t, this was for William,” Salli said.

“The school even organised a ‘Crazy Hair Day’, when everyone was encouraged to come in with their hair looking silly, to boost his fundraising. He became a bit of a local celebrity!”

Booked in to have his lovely blond hair finally cut in December, lockdown restrictions meant salons weren’t open until early summer – and on 6 June he finally had his hair plaited and then professionally lopped at their local Evissa hairdressers.

Previously down to his bottom, his luscious locks have been donated to the Little Princess Trust for children who’ve lost their hair due to cancer treatment.

“I asked him if he was excited about getting his hair cut after three years, and he said: ‘Yes, but not as excited as I am about another little boy or girl having hair’” said Salli.

“We’re just so proud of our little boy, how he genuinely always thinks of others ahead of himself.” 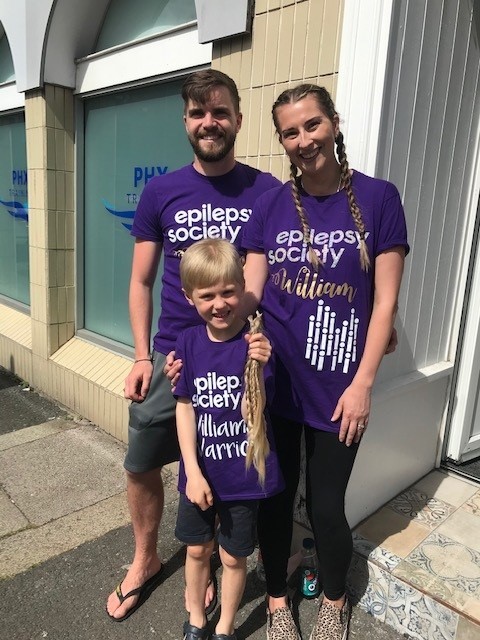 “He also looks so much older now – people can’t recognise him now because of his transformation.”

Walking into school the next day he was given a standing ovation by his class.

“He’s said he wants to do it all over again, maybe this time growing his hair even longer – we’ve just said he can do what he wants, William is already very proud of his best friend.”

To date William’s Warriors has raised over £20,000 with a series of raffles, long-distance walks and more, with plans to keep going until more is known about SUDEP to save lives where William’s was lost.

Kaylea said: “We were unbelievable touched when Salli reached out to us about Thomas’ wishes to raise money for William’s Warriors. He epitomises the resilience, courage and heart that all of our Warriors have shown and at such a tender age.

“Thomas is the most loving and kind young man around; he is so emotionally mature and intelligent, far beyond his years.”

“Since losing William, The Warriors have become a huge part of our life. We want to build a legacy to show the world who our boy was.

"We want to prevent this from happening to other families and ensure that though short, his life was full of love and meaning.”

Clare Pelham, Chief Executive at the Epilepsy Society said every one is "immensely proud" of Thomas.

"He has chosen a really special and brave way to remember his friend, William. 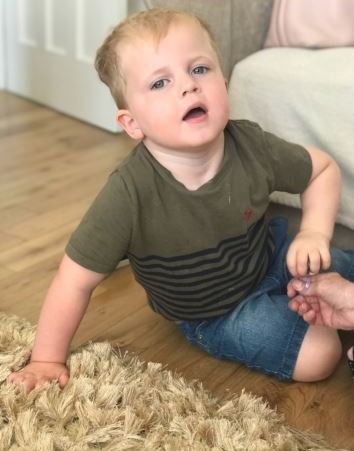 "Every day that he was growing his hair and putting up with being mistaken for a girl will bring hope for children with epilepsy in the future. He has astonishing courage and wisdom for a seven-year-old."

Clare added“SUDEP is one of the key areas of research for our scientists at the Epilepsy Society. We want to be able to identify biomarkers in the brain that may suggest a person is at risk of sudden death in epilepsy. That will enable us to put in place strategies to reduce that risk and hopefully save lives.

“That special bond which Thomas and William had from the beginning will live on through the research which Thomas is helping to fund, and the children whose lives will be changed, and we are very grateful for that.”

You can still donate to Thomas’s fundraising page by clicking here.