Much like Superman popping on a pair of spectacles to become Clark Kent, ex-Wiggle Murray Cook has found little wardrobe tweaks can work wonders when he wants to avoid attention. “No red [skivvies]! It's funny, I don't wear red a lot these days.”

Cook hung up his trademark top in 2012 to move into a behind-the-scenes role with the children's group and has since been making music alongside Lizzie Mack in the Soul Movers. “We're a five-piece band playing '60s style soul and rock'n'roll,” says Cook. “It's quite different [from The Wiggles], but we have some real chances for the audience to get involved and sing along, so some of the old Wiggles skills are employed.” 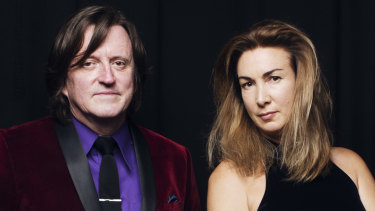 Their most recent album, Bona Fide, saw the band travel to America to play in some of the world's most famous recording locations, including Muscle Shoals Sound Studio in Alabama and Sun Studio in Memphis, where Mack sang in the exact spot Elvis Presley once did.

Billed as Murray Cook's Soul Movers, the band plays on Sunday at 4.40pm on the packed musical program for the popular Newtown Festival, an annual fundraiser for Newtown Neighbourhood Centre. Also on the schedule are gigs from the Delta Riggs, Godtet, P.Smurf, Scabz, Oly Sherman and more.

As a diehard inner westie who has lived around the area for 30-something years, Cook is a fan of the event. “The Newtown Festival really is for toddlers up to pensioners. So it's a great cross-section of all sorts of people, which is what I love about the festival and living in Newtown.”

Olivia Colman husband: The sweet love story of The Crown star and her husband

Justin Bieber: Popeyes' Chicken Sandwich Is 'Not Worth the Hype'
Entertainment