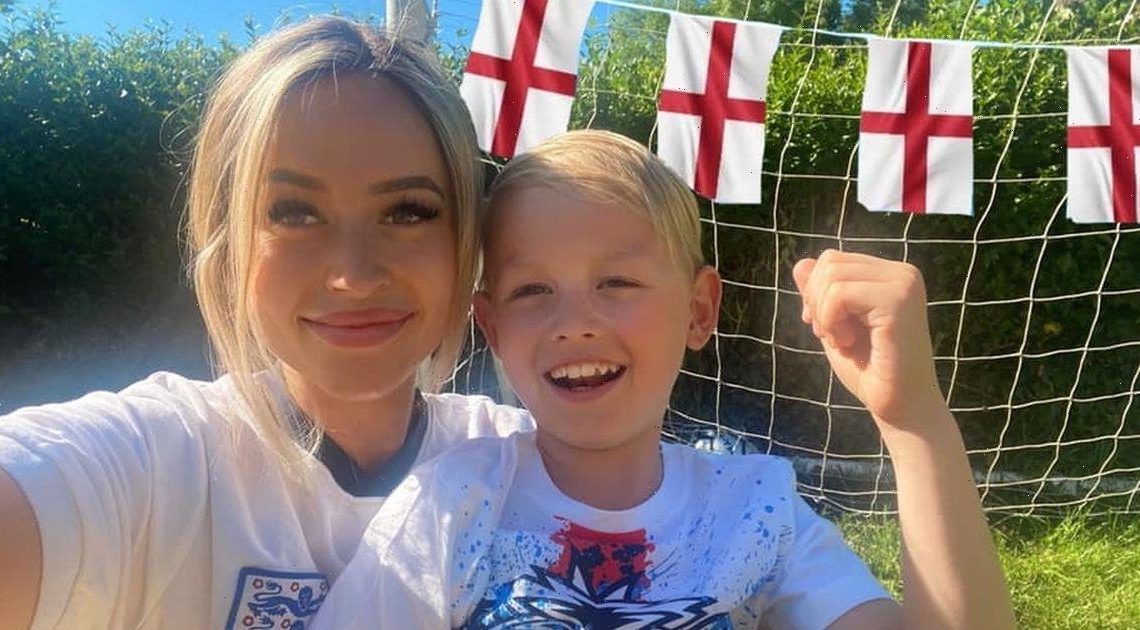 Are you letting your kids stay up to watch the football on Sunday evening? It's a question that's been hotly debated by parents on social media this week.

Mummy blogger Jessie Collins thinks mums and dads should bend the rules during the Euro 2020 tournament.

And as "it's coming home", she "couldn't refuse" her kids' excitement.

The 28-year-old paediatric emergency nurse penned an "apology in advance" to teachers having to put up with her "zombie" children this morning.

Jessie, of Peterborough, Cambridgeshire, said: "We're huge on football in our house and my eight-year-old and his dad live and breathe it, so the flags are up, the bunting is across the living room and we had a Euros party on a school night with lots of pizza and snacks."

Jessie continued: "I shared the post after my eight-year-old genuinely brought up a conversation about whether he and his sister could watch the game.

"We're quite good at bedtimes in our house and 7.30-8pm onwards is mum and dad's time to chill so my instinct was to say 'good try' on a school night and that he could catch up on the highlights the next morning like he usually does with his Manchester United games.

"When I thought about it though, I realised that I genuinely couldn't deny them both this opportunity given that it rarely comes around and they might have another '30 years of hurt' after this Euros coming up.

"They put forward an argument I couldn't refuse so I had to just say to hell with it. I just felt bad for the teachers on Thursday when the kids are running round school like zombies singing 'it's coming home'."

The England supporter's open letter to her child's teacher written on her blog named 'The Student Nurse mummy' read: "Dear Miss/Mr, I want to apologise in advance for this Thursday 8th July.

"My children are both likely to be overtired, emotional wrecks and will probably be walking around school in a half-asleep state whilst muttering about three lions under their breath.

"I'm not entirely sure they'll be their full, sunny best and complicated maths sums will be a no-go zone unless it's related to the numbers on the back of Southgate's boy's shirts.

"You might even find that during English they'll be absent-mindedly doodling 'It's coming home' over and over again in the corner of their book instead of getting on with the task at hand. (From my perspective, as long as they spell it right I think their punishment for this should be limited.)

"Myself, my eight-year-old son and five-year-old daughter all sat around the table to have a level, mature discussion about the situation earlier. We weighed up the pros and cons of letting them stay up three+ hours past their bed-time to watch England smash Denmark on a school night and I'm afraid the decision was unanimous."

The blogger's post continued with: "The truth is – IT'S COMING HOME and they're absolutely freaking right in saying I'd be a super mean mama if I denied them the experience of witnessing it.

"I promise to go right back to prioritising their emotional well-being when it comes to their 7pm bed-time on Thursday night and they should be half human by lunch-time on Friday.

"Having said that, we might need to consider whether they will even be able to attend school on Monday considering we're actually physically BRINGING it home on Sunday night. Celebrations are likely to run into the early hours but we can cross that bridge when we come to it, right?

"Thanks for your understanding on the matter. I know we all ultimately want what's best for the kids and I truly feel that what's best for them in this situation is to get to live the full 'ITS COMING HOME' experience – thus ending the 30 years of hurt they've been carrying around with them since before they were born.

Jessie's post has garnered more than 2,700 comments – and many agree with her points.

One commenter said: "It's special times especially after what everyone has endured over the last year and a bit (I'm sh*t at maths).

“The energy is massive and the kids need to be a part of it.”

Another said: “Couldn't agree more. Once in a lifetime opportunity and it will inspire so many kids. Missing one lesson won't hurt for this."

And a third laughed: "Just copied and pasted it and sent it to my kids' schools."

At the Avignon Festival, a Bleak Start