Energy bills are forecast to continue to remain high for some time amid the cost of living crisis, meaning millions of families face difficult decisions to cut back this winter.

Amid the concern, British mothers have taken to UK parenting forum Mumsnet to discuss an appropriate time to start heating their homes as the days start to get colder.

Responses ranged from people waiting until temperatures hit below freezing while others have already decided to switch on their radiators and risk higher bills. 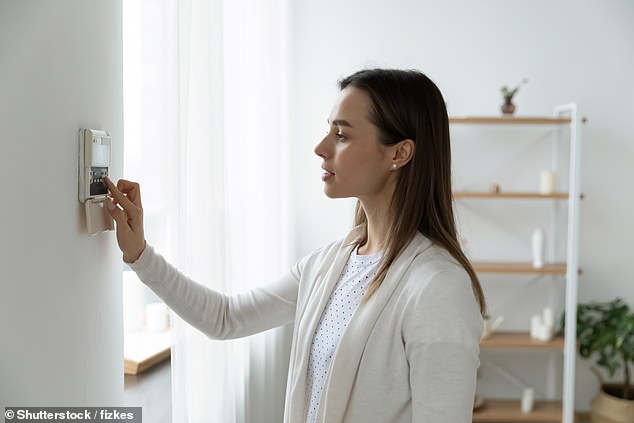 The anonymous British mother started off the conversation by asking others when are they turning the heating on.

She continued: ‘Assuming that you will turn it on at some point, is there a date or a temperature you’re waiting for?

‘It’s only 16 degrees inside my house right now and my hands are freezing! But somehow it feels wrong to put the heating on before October.’

Many admitted they were considering it but will hold off as long as possible and will wrap up in jumpers and dressing gowns for the time being. 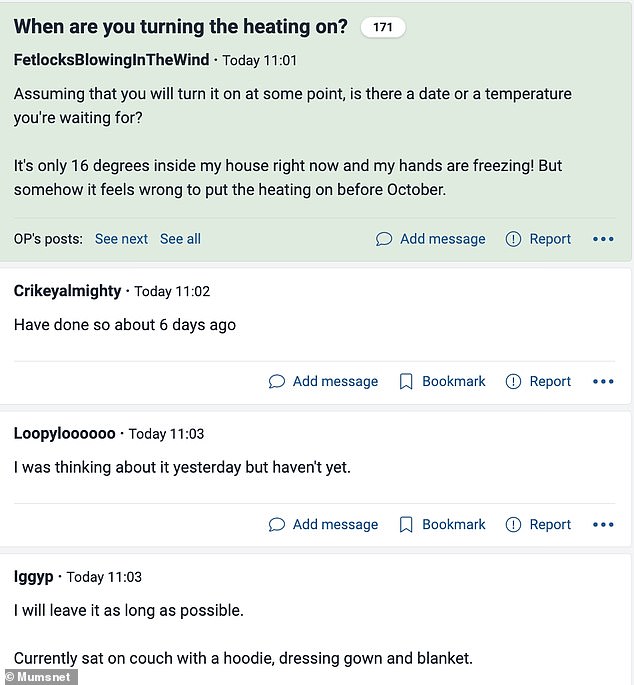 One person said: ‘I will leave it as long as possible. Currently sat on couch with a hoodie, dressing gown and blanket.’

Another said: ‘We are just moving into jumpers/dressing gowns and fleece pyjamas territory. Be a few weeks yet at least before the heating goes on.’

While someone else agreed saying: ‘When we’re actually miserable because we’re cold, and a jumper/blanket doesn’t help.

‘We’ve had it on twice for a short period of time over the last fortnight. Not on today at the moment.’

Some people admitted they have already put the heating on but many have only used the boost function for an hour or two. 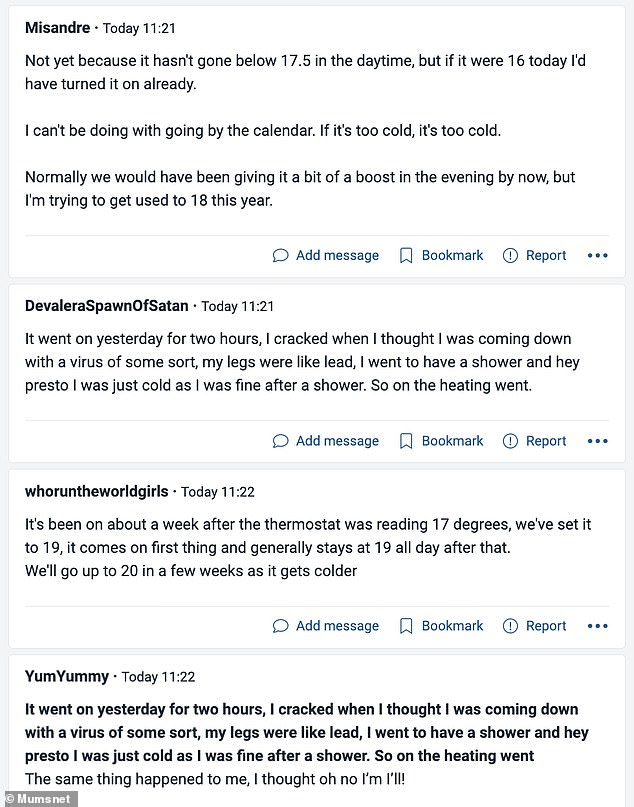 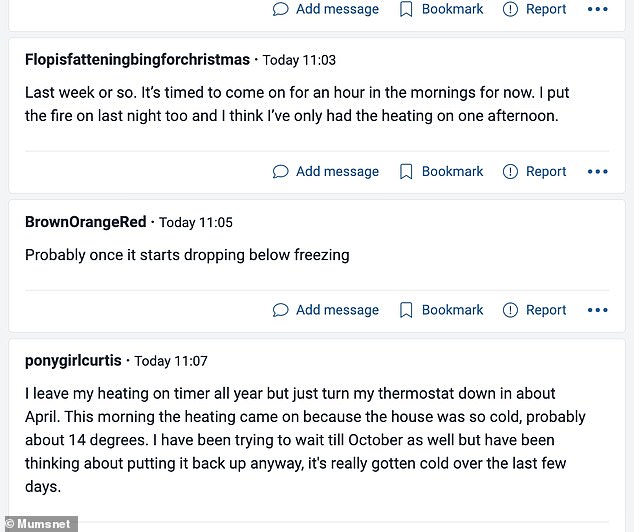 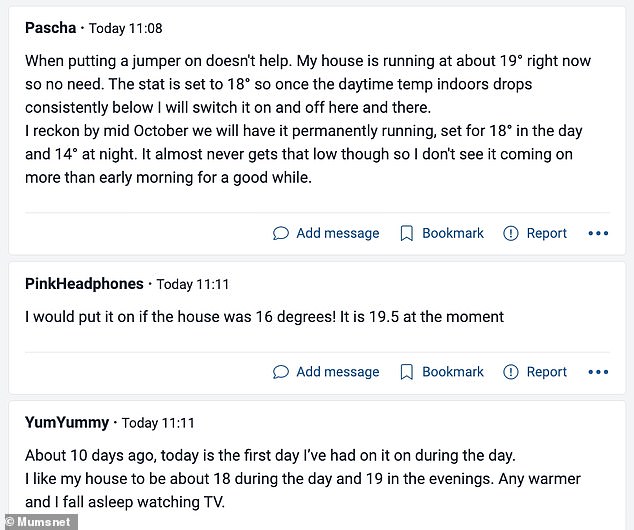 ‘Last week or so. It’s timed to come on for an hour in the mornings for now. I put the fire on last night too and I think I’ve only had the heating on one afternoon,’ one user said.

Another person said they were doing the same writing: ‘I’ve literally just turned mine on for the one hour boost, just to “test” that it works. Sixteen degrees in my living room just now.’

While someone else said: ‘We popped it on last night for an hour to take the chill off, because it was 15 degrees. The rest of the time we snuggled under blankets.’ 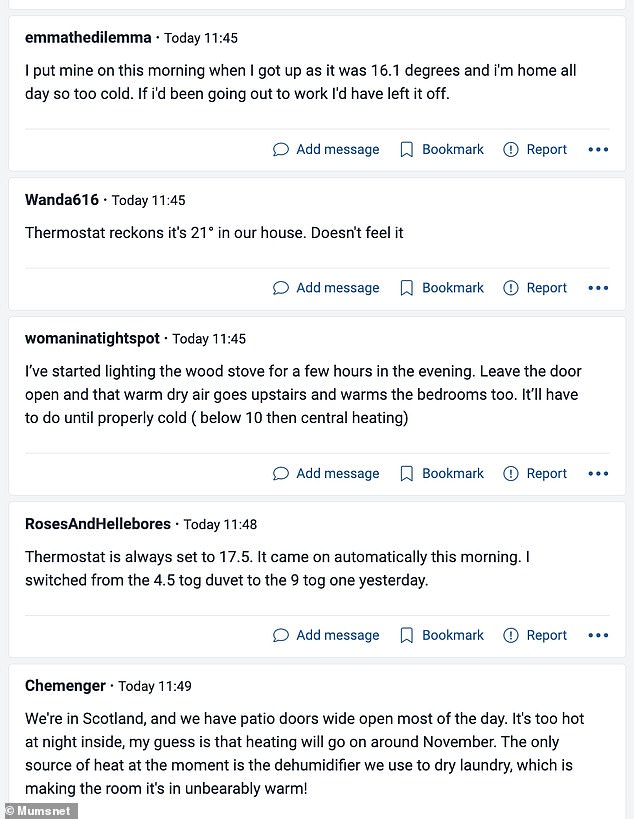 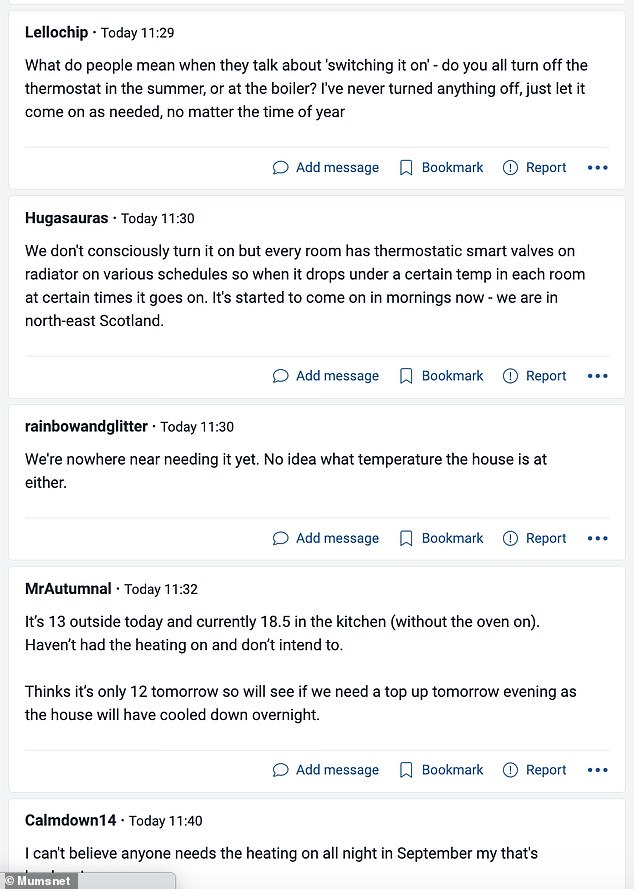 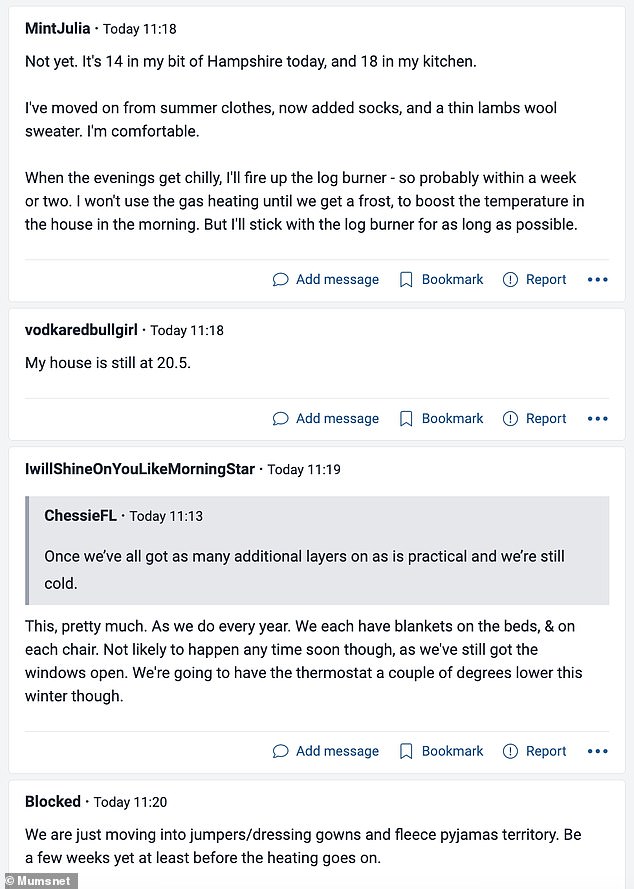 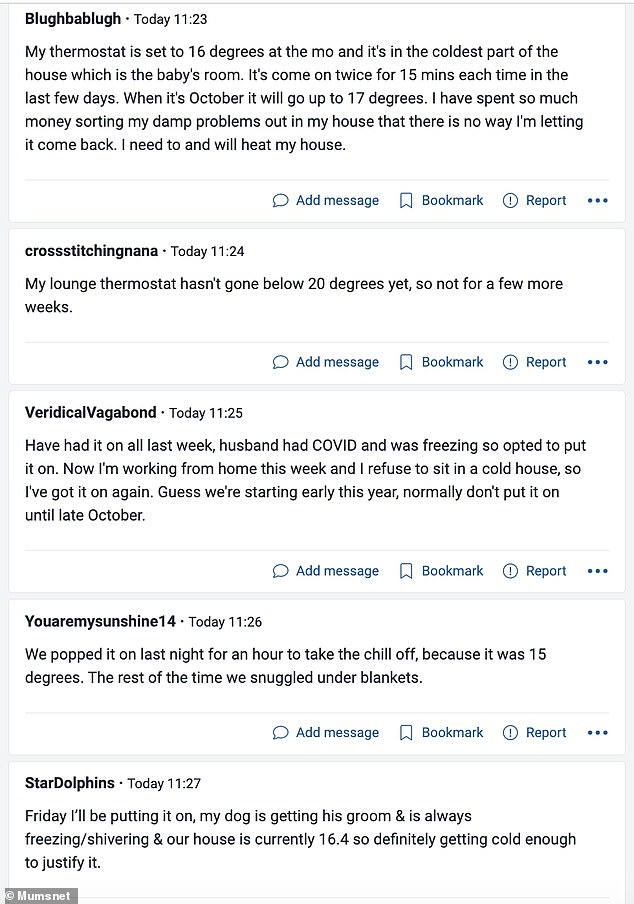 More people admitted they were ‘lucky’ that their homes were warm and kept the heat in so they don’t have to switch on the heating yet.

One mother said: ‘Probably November, for an hour a day. We’re lucky that this is a very warm house and I’ve bought heated throws, hot water bottles and oodie-type things to take the edge off.’

Another agreed saying:’ When it’s cold. Luckily house stays reasonably warm through autumn. If I’m in a jumper and socks and still cold then I’ll put it on. The kids will happily lounge around in their undies so they’re fine at the moment.’