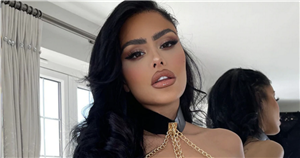 Model Chloe Saxon has opened up about her lifestyle to fans in an intimate Q&A.

The OnlyFans star gave her 1.1million followers a chance to ask anything they like – and her admirers certainly didn't hold back when it came to the probing questions.

They probed: "What size cc do you have in your chest? And did you put them above or below the muscle?"

The brunette bombshell replied: "475cc above the muscle, but I need them doing again soon. Maybe a little bigger."

And that wasn't the only surgery she discussed with her followers.

Many were also keen to know about her curvy rear, with Chloe previously revealing she has bum fillers.

Asked if she was done with fillers in her behind now, Chloe exclaimed: "Never".

She also confessed she's had a Brazilian butt lift (BBL) in the past, as fans asked her if she'd try it put.

However, she says she likes to stick to fillers these days.

"I've had a BBL, they aren't permanent either," she said.

"Unless you have loads of fat (which I don't), it's pointless. Fillers are my only option."

She added: "If fillers were a thing a few years ago, I would never have had BBL or implants." She also talked about her tattoos, as she revealed she has no plans to get anymore.

The model currently sports floral inkings all down her back and over her rear as well as around her thigh and on her wrist.

And she admitted instead of adding more, she would get some removed if she could.

"I wanna get my big side one removed but I hear the pain is unbearable," she said.

As well as talking about her life, Chloe often hits headlines in her racy outfits, with the model being an ambassador for risqué brand Fashion Nova.

She recently hot fans hot under the collar as she rocked the brand's Glow Up Rhinestone Tights which feature a cut-out that leaves your bum on show.