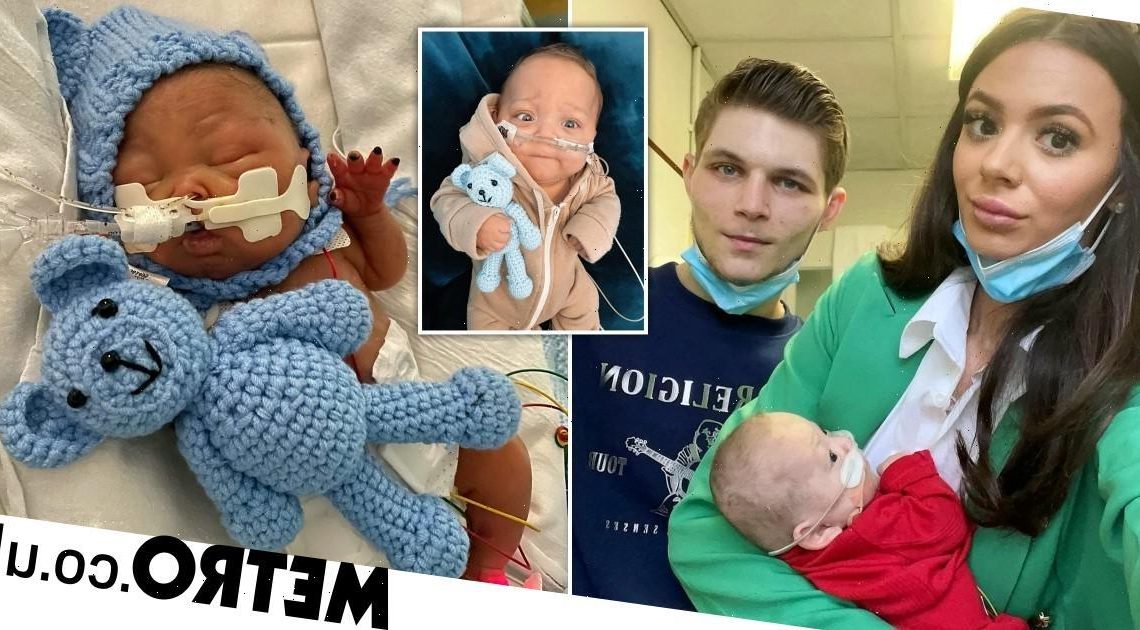 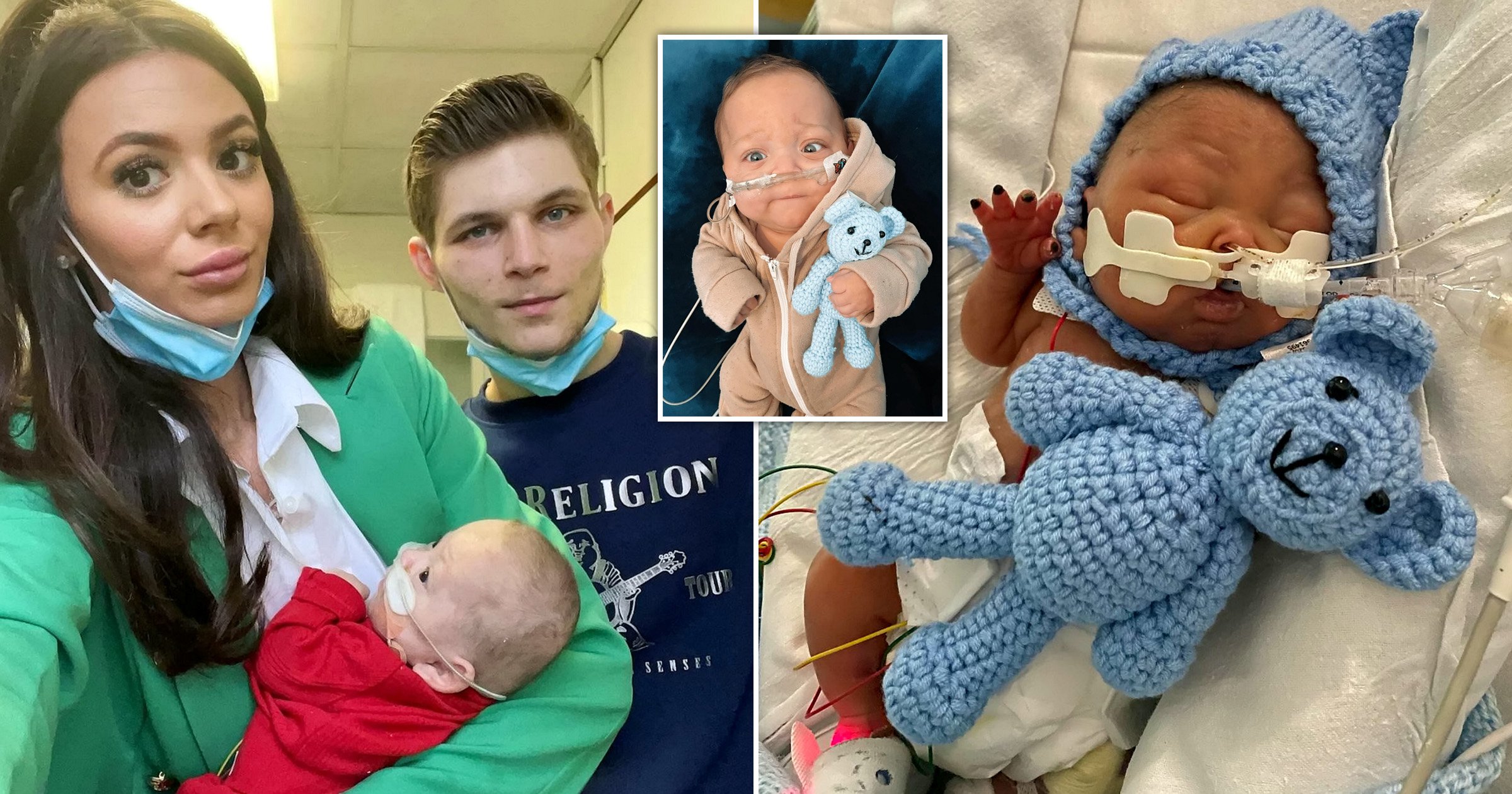 Meet the baby who was so small when he arrived 17 weeks early that his teddy bear was bigger than him.

Little Chay Jefferys weighed just 1lbs when he was born at 23 weeks on June 2 last year and spent nine months fighting for his life and battling chronic lung disease.

His mum, Megan Mcgee, 19, placed a teddy bear beside Chay to comfort him whilst he was in an incubator in the neonatal intensive care unit at Hillingdon Hospital, Uxbridge, London. The soft toy was significantly bigger than little Chay and completely dwarfed him.

Both Megan and Chay’s dad, Bradley Jefferys, 22, an electrician, twice defied doctors’ advice to turn off their son’s life support.

Thankfully, after 280 days in hospital, Chay battled to full health and was allowed to go home.

Now nine months and weighing 13lbs, Chay still has the bear which is affectionately named ‘Bluey’ and the teddy has become a firm favourite.

Megan, a full time mum, says: ‘When Chay was born we put a little blue teddy bear in his incubator to comfort him while he was in hospital.

‘The teddy was pretty tiny, but Chay was so small, it swamped him. It made us realise just how diddy and fragile he was.

”It was so scary, Chay was so tiny, he fit in the palm of my hand.

‘I just thank my lucky stars he wasn’t born just a few days earlier as he wouldn’t have made the cut off point as babies born at 23 weeks are usually deemed too premature for doctors to treat.

‘We were told he would never walk, talk, smile but he is now nine months old thriving, feeding, and smiling.’

She continued: ‘We’ve had a hard time. He was in hospital for nearly a whole year but now he’s home.

‘It’s been so nice giving him baths and having family over for cuddles.

‘He’s come such a long way and is now in proportion with his little bear. It’s become one of his favourite toys – he loves snuggling up with it.

‘We’re so proud of him for coming this far.’

Megan’s pregnancy went smoothly so it was a shock when she realised Chay would be premature.

‘I had a normal pregnancy apart from a tooth infection, I never expected to give birth prematurely,’ she explains.

‘I was in such agony and being given all sorts of antibiotics – I can’t think of another reason that he would have been born so early.

‘The doctors agree with me that it was probably the antibiotics that triggered my early labour.

Megan was relaxing at her mum’s house when she suddenly started to go into labour at just 23 weeks.

After rushing to hospital, she gave birth within hours.

Chay – who was born in his amniotic sack – was resuscitated by medics and rushed to intensive care before being transferred to University College London Hospital, Holborn.

‘When he was born, he didn’t cry as he wasn’t breathing,’ Megan recalls.

‘It was horrible not knowing what was going on but a really lovely nurse took a little video of them working on him, so I had an idea of what was happening.

‘I got a quick glimpse of him after he started breathing but he was rushed off so quickly.’

When Chay was just three days old, doctors confirmed he had suffered grade four brain bleeds on both sides of his brain along with damage to the white matter and cerebellum.

At three weeks his kidneys began to fail, and doctors advised the family turn his life-support machines off.

‘I said no right away, he had fought so hard I wasn’t going to give up on him,’ Megan says.

‘They kept suggesting it, but he just kept getting bigger and better and so eventually they stopped asking.’

Megan is hopeful that he will reach all his milestones and be able to live a normal life.

‘I really do think that he’s going to be fine, I think he’ll be just like any other kid,’ she says.

‘He’s so amazing and he’s come so far already. He’s got a lot of catching up to do but I know he’ll do it.

‘He still needs a bit of oxygen, but they think he’ll be off that in a few months too, it’s wonderful.

‘He’s having physio to help him with his mobility which is really helping. I can’t wait to see him start smiling more and crawling about.

‘Being at home has helped him loads already, he seems much more alert and is really grabbing for his toys and reacting to things.

‘He still loves cuddling up to Bluey, it’s so encouraging to see how much bigger he is now, shows just how far they’ve both come!

‘Chay is our little hero.’