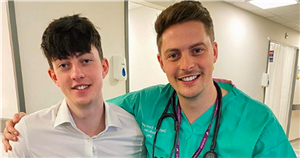 The government's Youth Mental Health Ambassador, 30, who recently wrote an official complaint to LBC Radio after a presenter called Strictly Come Dancing's Tilly Ramsay 'chubby', posted a photograph of his tattoo to his 2million Instagram followers.

Captioning the snap to his followers alongside a wave and blue heart emoji, he penned: "To Llŷr ‘God Of The Sea’."

Dr Alex revealed on his YouTube channel that he was having the tattoo done at South City Market in London alongside his girlfriend Ellie Hecht.

The mental health ambassador explained how he wanted to have the tattoo on the inside of his right wrist because it was 'personal' to him.

Llŷr, 19, had been struggling with his mental health when he made the tragic decision to end his life in July 2020, and as Dr Alex continues to grieve his beloved sibling, he has decided to get permanently inked in memory of him.

Sharing the tattoo on Instagram, we can see that Dr Alex has chosen a 'simple wave' for his tribute to his younger brother and explained that the meaning behind it relates to Llŷr's own name.

"His name was Llyr, I named him, I am ten years older than him and my parents said I could choose a name. So I called him Llyr which means God of the Sea in Welsh," he told his YouTube subscribers.

"We spent our whole childhood at Newgale Beach [Pembrokeshire] at the sea and that was the last place he was so it means a lot to me.

"I didn't want to see, like, write his name directly on something like a visible area so I wanted to get something not quite as triggering."

In July, the mental health ambassador and his family marked a year since they lost their beloved Llŷr.

Writing a poignant tribute to his little brother, Alex shared: "I can’t believe it’s been a year. Some days I really can’t accept or understand that you are not here. We miss you so much Llŷr.

"You give me so much strength, even when times are tough and it would be easy to give up.

"Mum, Dad and Elliott are doing ok, they miss you so much too," the doctor continued. "I would do anything to go out for a spin in the car with you again. Love you x."

The aspiring doctor was previously described by Alex as "the kindest and most caring soul".