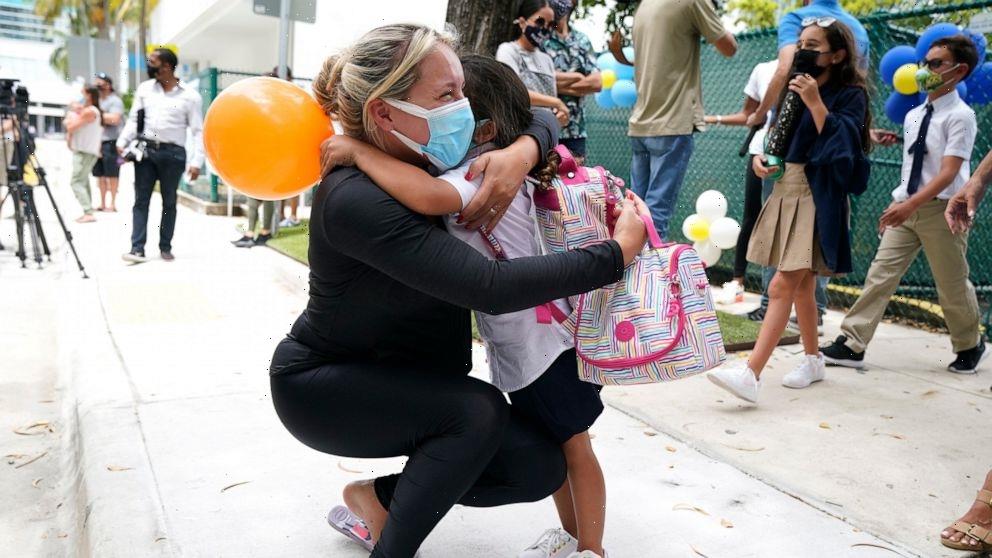 WASHINGTON — The rancorous debate over whether returning students should wear masks in the classroom has moved from school boards to courtrooms.

In at least 14 states, lawsuits have been filed either for or against masks in schools. In some cases, normally rule-enforcing school administrators are finding themselves fighting state leaders.

Legal experts say that while state laws normally trump local control, legal arguments from mask proponents have a good chance of coming out on top. But amid protests and even violence over masks around the United States, the court battle is just beginning.

Mask rules in public schools vary widely. Some states require them; others ban mandates. Many more leave it up to individual districts.

Big school districts that want to require masks are in court and battling governors in Florida, Texas and Arizona. Worried parents are suing over similar legislative bans on mandates in Utah, Iowa and South Carolina.

At the heart of the debates are parents, scared or frustrated for their children in an unprecedented time. The early court record is mixed, with victories for mask proponents in Arkansas and Arizona followed by back-to-back decisions in two big states going opposite ways. The Texas Supreme Court blocked another school mask mandate Thursday while a Florida judge allowed the rules to go forward Friday.

Republican officials who restrict mask mandates argue there are downsides to kids being masked all day and that parents should decide whether to put them on children, who are generally less vulnerable to the virus than are older adults.

But public health experts say masks are a key coronavirus-prevention tool that does not pose health risks for children older than toddler age, and truly effective when worn by a large number of people.

“This idea of parental freedom to decide what’s best for their child is not unlimited. It has never been unlimited in our system,” said Ellen Clayton, a pediatrician and law professor at Vanderbilt Law School in Nashville, Tennessee.

Nationwide, COVID-19 deaths are running at more than 1,200 a day, the highest level since mid-March. New cases per day are averaging over 156,000, turning the clock back to the end of January.

The surge is largely fueled by the highly contagious delta variant among people who are unvaccinated. In areas where vaccination rates are particularly low, doctors have pleaded with their communities to get inoculated to spare overburdened hospitals.

They have also sounded the alarm about the growing toll of the variant on children and young adults.

In Tennessee, for example, children now make up 36% of the state’s reported COVID-19 cases. Gov. Bill Lee has not banned schools from requiring masks but has ordered that any parent can opt out — and remote education options are limited this year. Few schools in the state have adopted mask mandates.

South Carolina passed anti-mask regulations and is now facing a federal lawsuit from the American Civil Liberties Union. The ACLU argues that the state is putting students with disabilities at greater risk in violation of federal law amid skyrocketing infections, particularly among younger children

Susan Mizner, director of the ACLU’s Disability Rights Project, said offering students with disabilities or medical conditions a remote option is not a good alternative. Limiting medically fragile students and those with disabilities to a remote-only education denies them equal opportunity, she said.

Schools already have plenty of restrictions aimed at protecting the health of kids. Rules against peanuts are a good example, said Ruth Colker, a law professor at Ohio State University and a disability-law expert.

Those rules are aimed at protecting kids with potentially fatal peanut allergies that can be triggered by particles in the air. Similarly, the argument goes, kids especially vulnerable to COVID-19 need everyone to wear masks so they don’t get sick.

“They need the people around them not to be spreading the particles of peanuts,” Colker said. “COVID is just like peanuts. In fact, is more contagious.”

Because schools that accept federal money are subject to federal disability law, she sees those arguments as likely to win in court. While many court decisions generally apply to one school or state, that could change if the federal government enters the legal fray. President Joe Biden has ordered his education secretary to explore possible legal action against several states that have blocked school mask mandates and other educational public health measures.

Whatever happens in court, though, is unlikely to bridge the vast and contentious political divides over masks. A recent poll from The Associated Press and NORC Center for Public Affairs Research found about 6 in 10 Americans wanted students and teachers to be required to wear face masks while in school.

But that poll also found just 3 in 10 Republicans favor mask requirements, compared with about 8 in 10 Democrats.

The divide is playing out in Florida and Texas, where several big school districts are defying governors’ executive orders against school mask mandates.

In Texas, dozens of school districts have defied Gov. Greg Abbott’s mask mandate ban. But the state’s highest court sided with the governor this past week as the Republican judges found the “status quo” of authority on masks should rest with him while the case plays out.

In Florida, more than half of public school students are now in mask-requiring districts, despite an executive order from Republican Gov. Ron DeSantis. He wants to leave such decisions up to parents, but on Friday a judge decided that schools need to be able to require masks to protect public health.

In places such as Utah and Iowa, where legislatures have passed laws restrictions or bans on mask mandates, the state could have a legal upper hand because state laws generally trumps local control. Lawrence Gostin, professor of global health law at Georgetown and director of the World Health Organization Center on Global Health Law, said he considers restrictions on mask mandates “utterly irresponsible” and “a breach of public trust” but sees the legal landscape as hazy at best.

“There’s going to be really fierce battles in the courtrooms across America,” he said.

‘FBoy Island’: CJ Franco ‘Would Be in Jail Today’ if She Were Sarah Emig

Green list countries UK: All the holiday destinations you can travel to right now
Entertainment