Home » Lifestyle » Martin Lewis advises woman whose abusive boyfriend built up £26,000 debt in her name on This Morning Martin Lewis advises woman whose abusive boyfriend built up £26,000 debt in her name on This Morning

MARTIN Lewis has given advice to Brits who are financially abused by their partners after one woman's boyfriend racked up £26,000 debt in her name.

The money guru told This Morning viewers today what to do if you're financially abused and typical signs that your friends or family members are suffering. 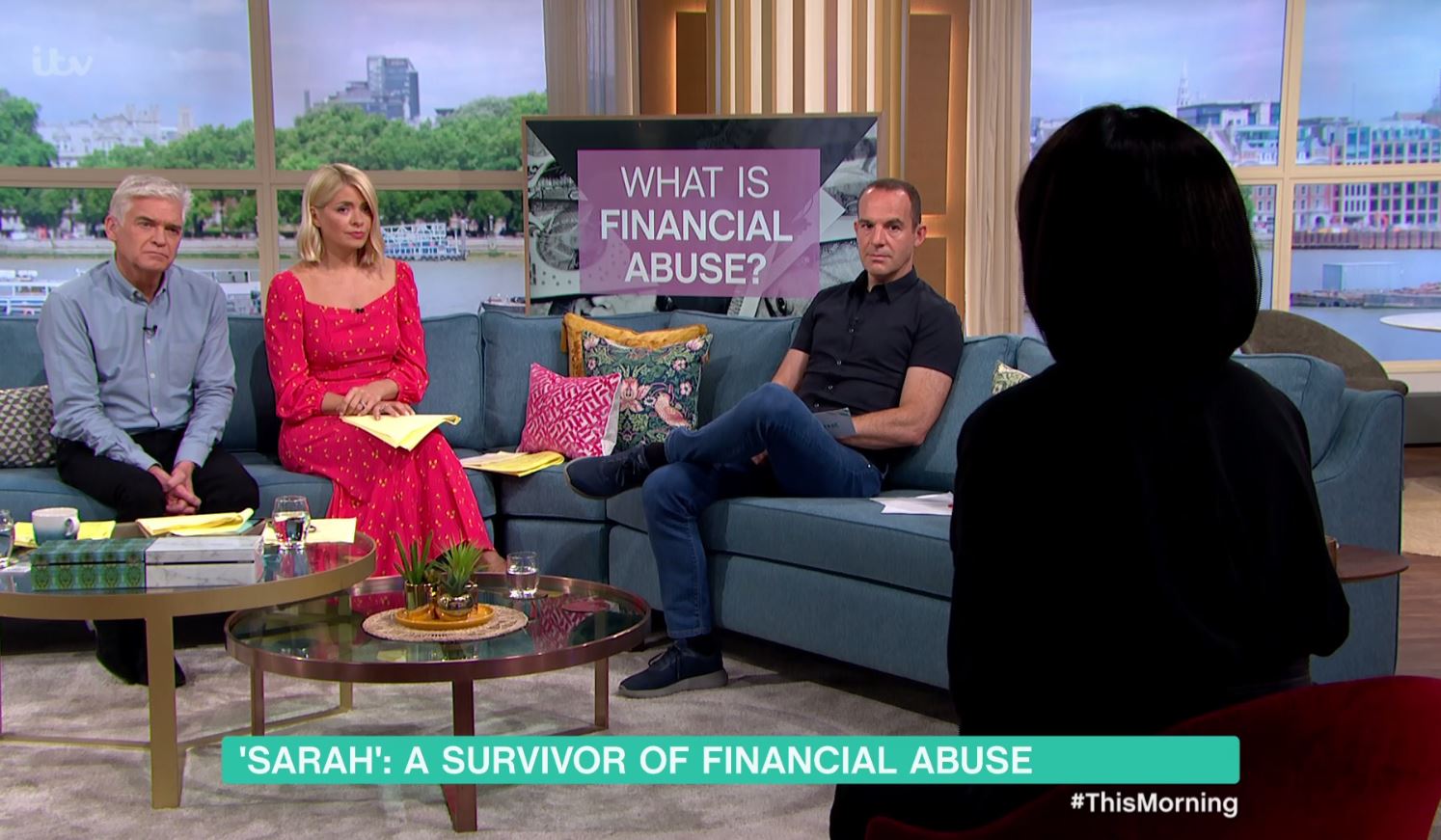 It comes after January's announcement that financial abuse is to finally be recognised by the law.

The woman, who went by the name of Sarah, first met her partner at a party when she was "very young and naive", viewers of the morning show were told.

Things progressed quickly and five months into the abusive relationship, she got pregnant and struggled to find a way out.

"At the time, I hadn't even heard of domestic violence so I had no clue of what I was involved with," she said.

"My child was born fairly early on into the relationship, so you're trying to make things work whilst dealing with the abuse."

"The financial abuse started with more subtle things, like he knew the pin number for my bank accounts.

"And there'd be several occasions where I'd go to the bank to withdraw money to find out I was overdrawn and the money was gone."

She said he told her that he'd used the money to pay off debts and promised he'd pay it back, but then never did.

Later on, he also took out a loan in her name.

But it wasn't until after she ended the relationship and debt letters started coming through her post box that she noticed what he'd done.

By this point, the charges and interest had been added to the balance so the debt amounted to £26,000.

Sarah said: "I called the creditors and explained the situation, but they said that it was in my name so there was nothing they could do."

She sought help from debt charity Step Change who contacted all her creditors and distributed a monthly allowance to each of her debts, which she paid for seven years.

Charity Surviving Economic Abuse also put her in touch with another service that gathers information about your case to take it to the creditors.

"It took some time but eventually the creditors agreed to write the debt off.

"I was due to be in debt for 16 years of my life, which was quite a daunting thought, but now I'm officially debt-free."

HERE are some tips from Martin Lewis on how to spot if a friend or family member is being financially abused.

Martin Lewis urged viewers to go to the police if they're going through something similar or if they're ever in doubts.

He said: "You can and you definitely should report it to the police.

"In 2019, the domestic abuse bill defined financial abuse as a form of domestic violence.

"That hasn't passed through law yet, but hopefully it will by 2021."

Yet the UK already has legislation to do with coercive and controlling behaviour, which covers this in some extent, he added.

Financial abuse is controlling another adult's access to their finances or ability to earn in order to control or intimidate them, or reduce their independence.

Forcing you to add them to your bank account is one definition, while taking debt in your name is another, Martin said.

Financial abuse can start with innocent requests for money, taking cash from you without asking, or even suggesting that you stay at home or look after the children while they go out to work, and then escalate later on.

If you're not sure whether you're actually being abused, you can call the National Domestic Violence Helpline to get some more information, Martin advised.

If you find yourself in an emergency, you should always call the police on 999.

Or if you think a friend or family is being abused (see typical signs in the box above), you can also call the helplines and explain the situation to get advice.

Financial abuse is a "very big and serious issue" and several banks have started doing more work in order to improve the situation, Martin added.

He said: "Barclays, Co-op, Lloyds, Halifax, HSBC, and Santander have joined a voluntary code that tries to help with financial abuse."

"HSBC and Barclays, for example, will now let you have an anonymous sort code."

This is helpful as your sort code is usually linked to your branch, meaning if your ex-partner has to give you money, they can easily find out where you live.

If you're worried about having a joint account with an abusive partner, you should also consider changing the signatory rules, Martin added.

This is because joint accounts usually allow one partner to have access and withdraw cash without the other one's permission.

By changing it so both of your signatures are needed, you can prevent being left out of pocket.

For more information on money abuse and your financial rights within a relationship, check out Martin Lewis' guide on MoneySavingExpert's website.

Last year, campaigners claimed that Universal Credit stops "victims of domestic abuse escaping their relationships" as partners were able to control their partners' access to funds.

It was then followed by warnings from MPs over the same issue.

Meanwhile, the laws surrounding domestic violence were changed over the summer – here are 11 things that are illegal for your partner to do.