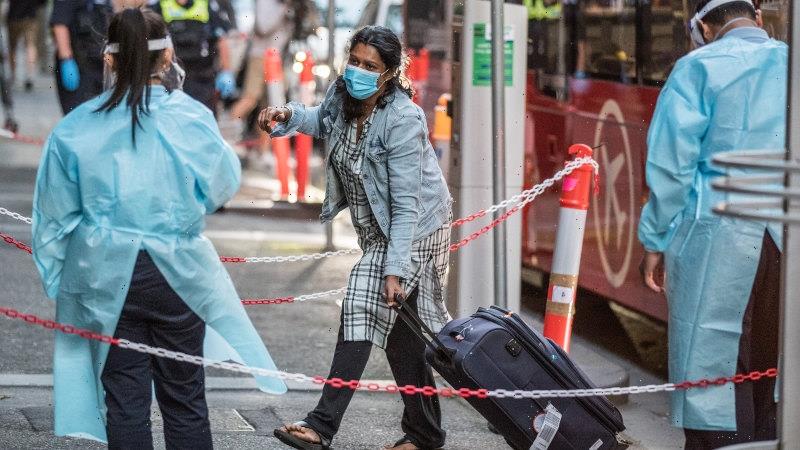 Mandatory vaccines for aged care workers, quarantine to be separated

Vaccinations are set to be mandatory for aged care workers across the country and international arrivals in hotel quarantine separated from domestic quarantine residents as the nation’s leaders work on how to slow the spread of the highly transmissible Delta variant.

In an emergency meeting on Monday evening, a government source said national cabinet was expected to agree that all quarantine workers needed to be vaccinated and regularly tested for COVID-19, and also to make testing and vaccinations available for household contacts of those workers. 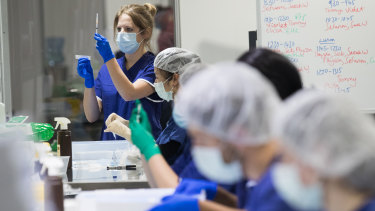 Aged care workers across the country will have to be vaccinated in a new agreement from national cabinet.Credit:Jason South

But state and territory leaders went into the meeting seeking answers on the speed of the country’s vaccine rollout and will push for more vaccines as cases of the highly transmissible Delta variant grow around the country.

Australia has fully vaccinated less than 5 per cent of the population against COVID-19, ranking the country last of the 37 OECD countries according to tracking from the UK’s Global Change Data Lab.

To date, more than 7.34 million vaccines have been administered across the country, including first and second doses.

National cabinet was set to look at introducing day 16 post-quarantine testing, but it’s unclear if any consensus was reached on that issue by the time of publication.

The 5.30pm meeting also included a briefing from Chief Medical Officer Professor Paul Kelly on the state of the outbreaks and the Delta variant, and a briefing from Lieutenant-General John Frewen on vaccine stocks and the rollout.

West Australian Premier Mark McGowan said he was in favour of making vaccines mandatory for aged care workers, but Pfizer should be made available for all workers regardless of their age and there needed to be a proper educational campaign.

“I support it but I just want to make sure it’s a uniform approach across Australia and we don’t have any adverse consequence that is difficult to manage,” he said. “The one concern about it is that some people will leave the workforce.”

WA recorded one case, in a 32-year-old woman who attended the same gym as the woman who tested positive after recently returning to Perth from Sydney.

NSW Premier Gladys Berejiklian also reiterated the state needed more doses to meet the significant demand, and said more GPs should be brought into the rollout.

NSW, which recorded 18 new cases to 8pm on Sunday, has used 98 per cent of its vaccine allocation.

“We can see the number of doses we have been promised in the next weeks and months, but to make sure those jabs get into arms I need to see more GPs across the nation be offered to sign up to the program,” she said on Monday morning.

Victorian Premier Daniel Andrews also flagged current vaccine supplies as a problem, adding that the only way out of the pandemic was to have a “significant percentage” of the population vaccinated. The state has used 91 per cent of its vaccine supplies.

“No one can be happy with the way this vaccine has been rolled out. We’ve got supply problems,” Mr Andrews said in his first media appearance since returning to the job following an injury.

Queensland Premier Annastacia Palaszczuk also called for the cap on international arrivals to be lowered, after the state recorded two new cases.

Vaccine Operations Centre boss Commodore Eric Young said states, territories and GPs would see a “moderate increase” of Pfizer doses over the course of July as more GPs move to provide that vaccine as well as AstraZeneca.

“There’s a gradual ramp-up through July,” he said.

Federal Opposition Leader Anthony Albanese said the issues being canvassed by national cabinet should have been cleared up months ago, and he wants to see Prime Minister Scott Morrison outline how the vaccination rate could be increased.

“Scott Morrison had two jobs this year, he had to effectively roll out the vaccine, and he had to implement a system of national quarantine. He’s failed both,” Mr Albanese said.

The national cabinet review of where high and low-risk travellers are housed in quarantine comes after a mine worker who quarantined near international travellers caught the coronavirus before travelling to a gold mine in the Northern Territory. Now six cases have been linked to that mine cluster, including one mine worker who had returned to Queensland.

Stay across the most crucial developments related to the pandemic with the Coronavirus Update. Sign up to receive the weekly newsletter.