Home » Lifestyle » Man receives cancer diagnosis, gets married and has a child all within 20 months 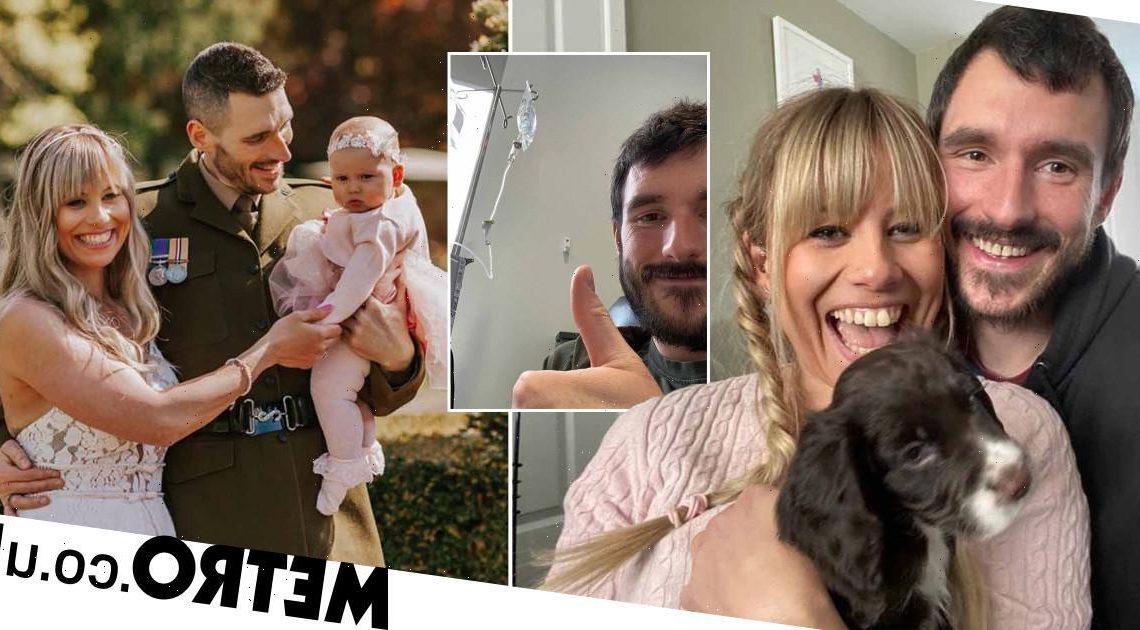 Man receives cancer diagnosis, gets married and has a child all within 20 months 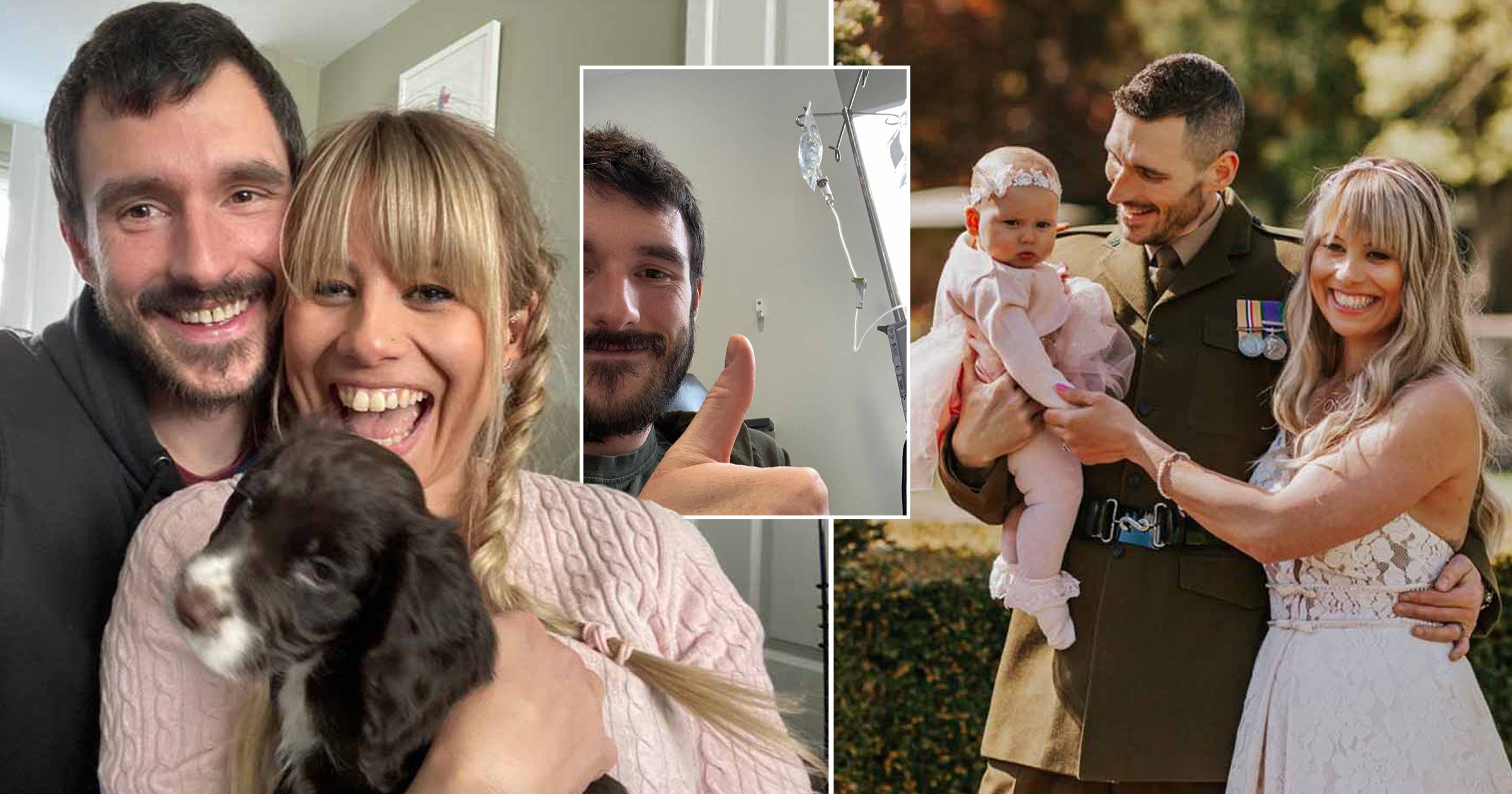 In just 20 months a former solider met his soulmate, married, had a child, and received a terminal diagnosis.

Owen Murray, 39, says ‘every day is a gift’ after the intense period of major life experiences.

After meeting Laura Murray, 38, on a dating app in October 2019, the couple moved into together in February 2020.

Happily together in Warwickshire, they then received the news that Owen has stage four colorectal cancer – just three days before lockdown.

Then, two weeks after that, Laura discovered she was pregnant.

He said: ‘Our relationship has certainly been a baptism of fire.

‘We’d been discussing getting a puppy, so the day after my diagnosis, we got a cocker spaniel, Bodhi.

‘Our next surprise came two weeks after my diagnosis, when we discovered Laura was pregnant.

‘I’m still unsure which was the bigger shock, the cancer or the baby. We’d never even spoken about children, although having one is the best thing that’s ever happened to me.’

Much of 2020 was spent in hospitals, for Owen’s cancer treatment and Laura’s pregnancy.

Owen’s main tumour was in his rectum, but the cancer had spread into his lymphatic system and another growth was lurking in his liver.

The tumour was too big to safely operate on, so Owen had eight sessions of chemotherapy between April and July to try and eliminate it all over his body.

Unfortunately this wasn’t a success, so doctors tried radiotherapy on the main tumour.

By then there were four tumours in Owen’s liver, resulting in a liver resection – over a seven hour operation in August, a third of the organ was removed.

Owen had an epidural for pain relief, but the surgery left him with a post dural puncture headache – an extremely painful experience that can happen after this procedure.

He said: ‘It’s like having an elephant jumping up and down on your brain for four weeks. I couldn’t even open my eyes or lift my head off the pillow.’

Owen’s ordeal was nowhere near over, as a scan showed he already had three tumours on his liver and the primary growth on his rectum was back to its original size, meaning more chemotherapy until December 2020.

Good news came, though, as on December 18 Laura gave birth to their baby named Luna, who is now seven months old.

Hours later, Owen proposed. He said: ‘We were still in the hospital. It was about five or six hours after Luna was born.

‘She’d had a shower, an hour’s sleep and was feeling a bit more human, so I got down on one knee and after about five minutes of us both crying, Laura said yes.’

Three days later, things took a turn for the worse with Owen’s health – his treatment had not worked and there was nothing else available on the NHS, so his cancer was declared terminal.

‘We both knew it was an option, but we hadn’t dwelt on it,’ said Owen.

‘It was quite something to absorb at such an emotional time anyway.’

In the months that followed, he took part in a clinical trial in Oxford with an experimental chemotherapy drug, though it didn’t work.

After this, he began researching other things he could try and ways to prolong his life.

Launching a GoFundMe page with a £30,000 target, he then found a clinic in Germany offering treatment the couple hope will prolong Owen’s life.

The couple still have hope he might one day be cured.

He said: ‘I take each day as it comes. Every day I get on this planet is a gift, but I’d like more than one or two more.

‘I am under no illusion about how serious my condition is. It’s a very, very tough disease and the survival rates from it are quite low.

‘If I can turn three months into six, or six months into 12, then that will be wonderful, but people do recover and there’s a chance I could make a full recovery so, of course, I am focusing on that.’

However, the couple wanted to tie the knot sooner rather than later, so in May they married.

Now Owen is in Germany working on a treatment plan, while Laura and Luna plan to join him later on.

Owen said: ‘I’m always glass half full rather than empty. I’ve always got my chin up.

‘Life at the end of the day is a series of challenges. You either rise to them or you give up and at least I have Laura, who has been my rock.

‘As far as I’m concerned, I’m a really lucky guy. I’m lucky I came home from Iraq in one piece all those years ago.

‘If this thing ends up killing me then that’s what’s meant to be at the end of the day.

‘I’m not going to waste any of my life moping about it and I’d advise anyone else in my position to follow my lead and do the same.

‘If you suspect something is wrong, don’t hang around, get yourself checked as soon as possible and look for alternative therapies, as well as the NHS, as time is not your friend.’

He added: ‘Every day is a gift for me. I am making the most of enjoying my family and whatever happens, I’ve had a great life and can’t complain at the hand I’ve been dealt.’