Facebook has banned the sharing or viewing of our news articles on its platform. For independent journalism straight from the source, download our app and sign up to our newsletters.

Workers making McDonald’s sweet and sour sauce, KFC gravy and Aeroplane Jelly have gone on an indefinite strike to try to force their employer to agree to pay rises after years of flat wages.

About 80 workers at McCormick Australia’s factory in Clayton, south east of Melbourne, walked out on Thursday after failing to reach a new enterprise agreement in the more than four years since their last deal expired. 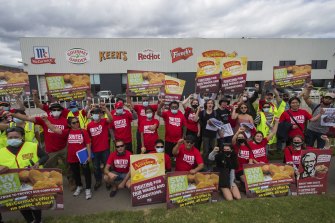 McCormick workers have gone on an indefinite strike.Credit:Paul Jeffers

But the company insists no customers will be forced to eat their nuggets dry or their chips plain, saying its supply of a range of sauces to corporate customers would not be affected.

At issue in negotiations to replace the 2014-16 agreement, which remains in force while talks continue, are workers’ penalty rates, overtime and paid meal breaks, which the United Workers Union says McCormick wants to reduce.

It wants annual pay rises of 3 per cent, almost double last year’s increase to the minimum wage, and for other conditions to stay the same. Workers at the site earn an average of $31 an hour, according to the UWU.

“These workers have worked every day during the pandemic and the lockdown and that’s added to the intensity of what the workers feel about their efforts … being recognised with a wage increase,” UWU director of food and beverages Susie Allison said.

In addition to sweet and sour sauce, a range of McDonald’s other sauces are made at least in part by McCormick, the union said.

A McCormick spokesman said the company was trying to reach a fair agreement with its employees but would not negotiate publicly.

“We will work to come to an agreement that continues to fairly compensate our employees while also serving the best interests of our overall business in Australia,” he said in a statement.

“McCormick is pleased to reassure our partners that there are no issues with our supply chain and all our customers will continue to receive the great products for which we are famous.”

Workers at McCormick, who are highly unionised, took industrial action in 2017 to try to get the company to agree to their demands without success.

McCormick bills itself as the largest producer of spices and herbs in the world globally and makes brands including Keen’s and Grill Mates as well as the products it supplies directly to the fast food giants.