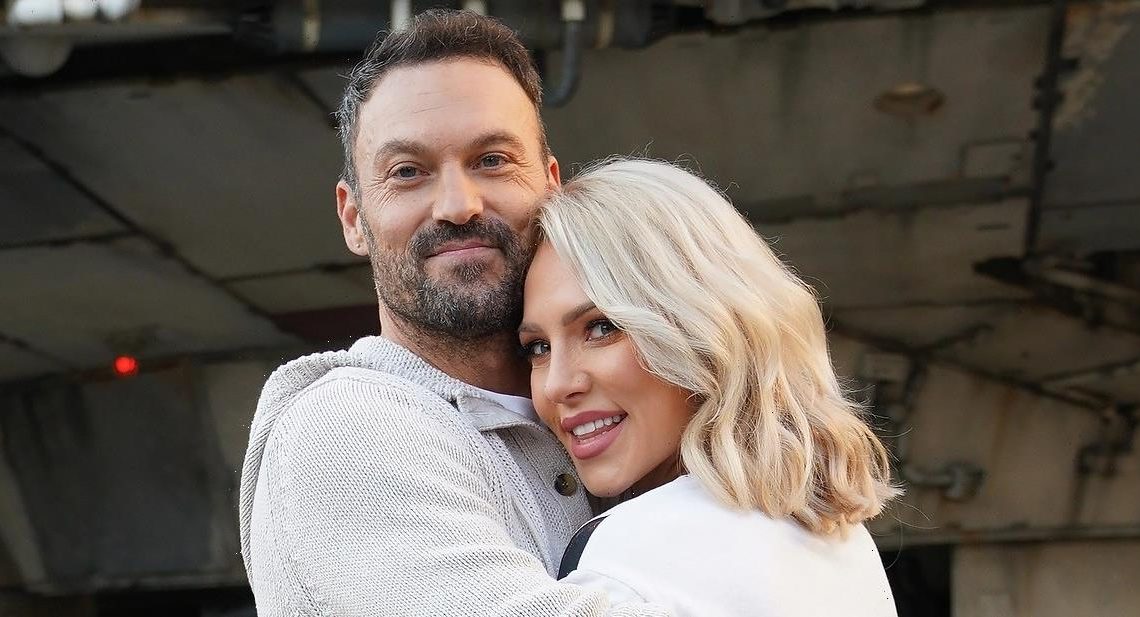 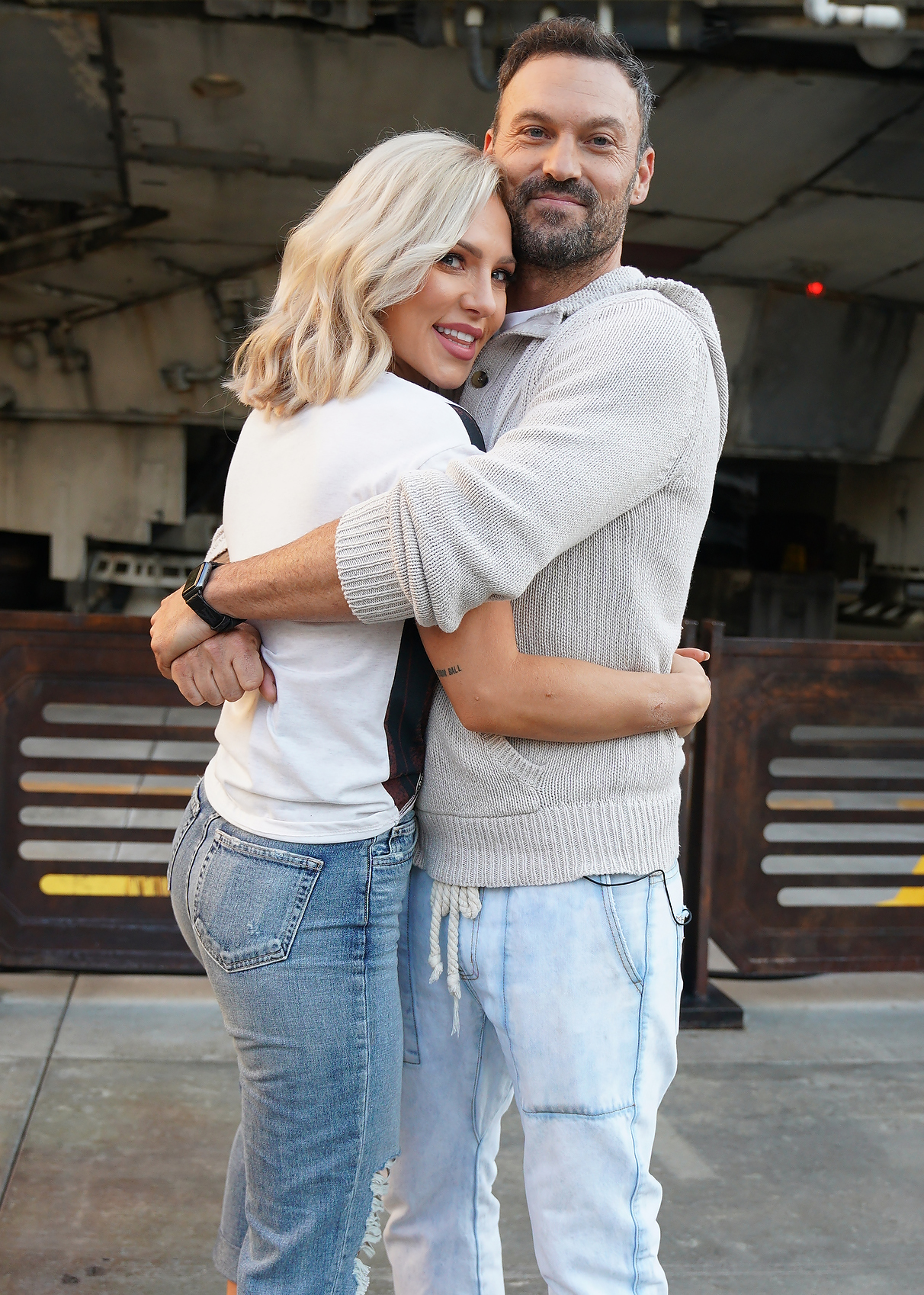 Chemistry on and off the ballroom floor! Following Brian Austin Green and Sharna Burgess’ shocking elimination from Dancing With the Stars, the couple hasn’t let that stop them from enjoying their burgeoning romance.

“1 year of accepting me in a way I’ve never been loved before ❤️ #damnimlucky,” the Beverly Hills, 90210 alum, 48, captioned a close-up snap with the Australia native, 36, on Saturday, October 16, while celebrating their first anniversary.

The former DWTS champ, for her part, gushed about Green via her Instagram Story on Sunday, October 17, alongside a snap of the couple kissing. “He doesn’t ‘make me happy,’ I was already happy before him,” she wrote. “But holy s–t does he amplify the f–k out of my happy. #1year.”

One week earlier, the Masked Singer alum and his professional dancer girlfriend were the first couple eliminated — alongside Bachelor Matt James and Lindsay Arnold — during the October 12 episode after performing Disney-inspired routines to “Someday My Prince Will Come” from Snow White & The Seven Dwarfs and “He’s a Pirate” from Pirates of the Caribbean: The Curse of the Black Pearl.

“Thank you so much, everybody, that, like, supported us and voted for us and was there for us,” Green said via Instagram Story on Wednesday, October 13. “It was really a great experience for us, not just with the people we met, but with the fans that supported us and just getting to dance with each other.”

Despite controversy that the pair were salty over their exit and refused to do interviews post-show, they reasserted that they enjoyed the experience.

“We got to be real-life prince and princess. We have some amazing costumes we’re going to try and keep, the kids [Noah, 9, Bodhi, 7, and Journey, 4, with whom Green shares with ex Megan Fox] are going to absolutely love them,” Burgess added in the social media footage. “I can’t wait for them to see our Disney dances. And it’s all love and it is all good and we did not skip out on press. … For now, we’re just going to enjoy each other today and enjoy not having anything to do rather than that.”

Ahead of their show departure, the couple received criticism from the judges for showing too much PDA on the dance floor.

“I never thought the waltz was going to come. It was so much kissing and cuddling and messing about,” DWTS judge Len Goodman said after the pair completed their Snow White number. “I would’ve liked to see a much more traditional waltz.”

One week prior, the DWTS pro slammed similar comments from earlier weeks in the ABC competition as she posted rehearsal photos of the pair.

“For those that say we kiss too much, here’s a full 🍑 grab instead,” the dancer wrote via Instagram on October 4. “But for real though, we kissed once in the first show that’s it. … This isn’t a showmance, this is real life love and it’s a part of our journey. Every step. Every struggle. Every success.”

The couple first went public with their romance after a PDA-packed Hawaiian vacation in December 2020, weeks after Burgess hinted she was dating someone. 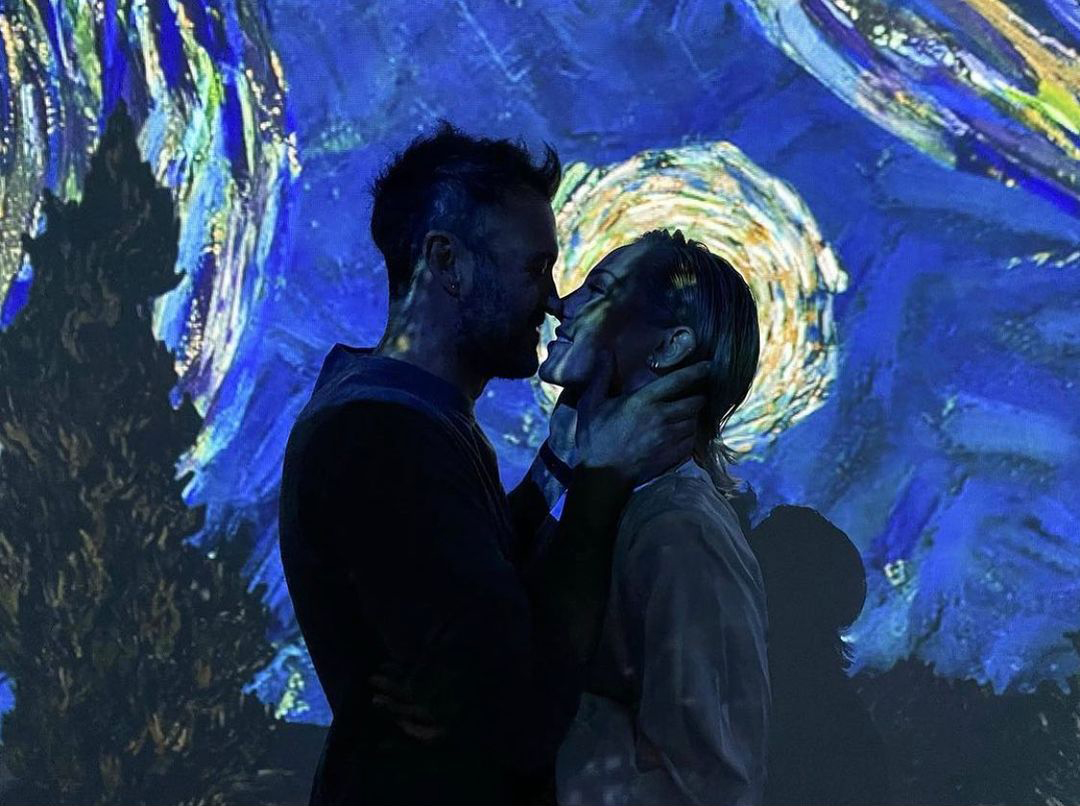 “It’s been really awesome,” the professional dancer exclusively told Us at the time. “I actually am not on the market anymore. But it’s very new and very, you know, it’s dating, essentially. No one’s calling us a relationship yet.”

Dancing With the Stars’ Hottest Hookups

One month later, the pair made their Instagram debut and have since continued to strengthen their bond, though they aren’t rushing into the next stages.

“Just because we’re in love doesn’t mean it’s for sure that we’re going to make it to the kids stage,” the ballroom dancer exclusively told Us Weekly on October 7, while discussing her new PETA campaign. “We hope so. We hope it’s the endgame. We want it to be endgame, but both of us can’t promise those things early on, especially to [his] kids.”

Though, early on in their relationship Burgess did broach the subject of a potential marriage with the “… With Brian Austin Green” podcast host.

“That was a deal-breaker for me,” she explained to Us, describing the discussion the “grown-up thing” to do. “I was really grateful that he was open to that. He even brought it up. He said with the right person then yes. … And I do want marriage and babies, what a fairy tale. So I needed to know.”

Listen to Watch With Us to hear more about your favorite shows and for the latest TV news!