Home » Lifestyle » Loyal cult followers will be disappointed with The Grudge Loyal cult followers will be disappointed with The Grudge

The Grudge is about a phenomenally unsuccessful exercise in anger management. Its villains are the ghosts of a family still enraged by the wrongs that killed them. The genealogy of the film itself is almost as complicated. Produced by Sam Raimi, one of Hollywood's doyens in the art of the supernatural, it's the fourth in a series of films based on a 2002 Japanese horror movie with a loyal cult following. 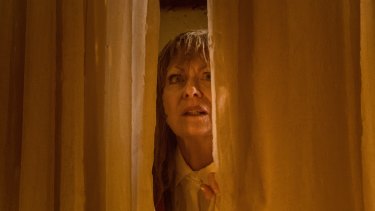 Jacki Weaver stars in the supernatural thriller The Grudge.

In line with these origins, the aggrieved ghosts are Japanese but they travel widely, colonising other bodies by infecting them with a self-destructive curse or simply popping up out of nowhere to do their worst. The results are then gleefully depicted by the film's special effects crew with an emphasis on mutilation and decomposition.

A wan-looking Riseborough and Bichir, chain-smoking his way through the role, are playing police detectives investigating a succession of grisly deaths connected with a suburban house in Pennsylvania. It's hardly a whodunnit, however. The suspense – what there is of it – is mostly to do with when and how each killing is to come about.

The film is by Nicolas Pesce, known for a couple of small but creepy essays in horror. The most recent was Piercing (2018) with Mia Wasikowska as a call-girl who proves to be more than a match for a homicidal client. Both films point to a director who likes to play cat-and-mouse with his audience and The Grudge's few real shocks are all in the timing.

A barely glimpsed ghost may drift in and out of the frame for some time before pouncing, which is a good idea until it isn't. After one or two screams, the audience at my screening seemed to decide that familiarity bred indifference.

The script is a jigsaw of separate storylines linked by the part played by the house and rolled out without much regard for chronology. We're continually flipping back and forth in time, which is not as confusing as it sounds, but it could puzzle those new to the series.

In the end it doesn't much matter. Nothing does in this movie. Pesce has hired some fine actors and squandered them on a plot that isn't ingenious enough to justify the heartlessness that's all part of the package at this end of the horror movie market, where the desire to prop up a tired old franchise is more important than the film itself.

Seven ways to wear the experts' colour of the year

Pop-up dinners that share a culture, course by course
Entertainment