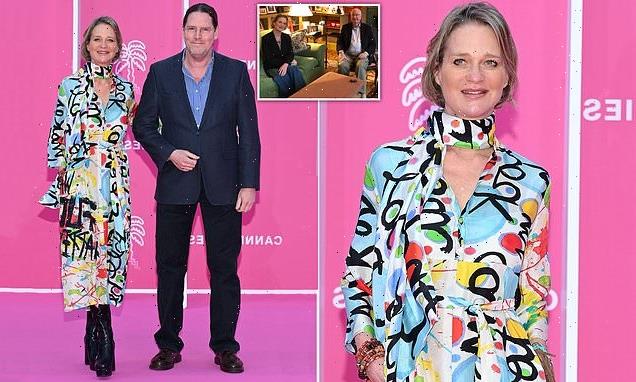 The illegitimate daughter of King Albert II of Belgium beamed as she posed alongside her boyfriend during a rare public appearance in Cannes earlier today.

Princess Delphine, 53, formerly known as Delphine Boël, is thought to be the result of an 18-year affair between the former monarch, 86, and Belgian aristocrat Sybille de Selys Longchamps, 79, that began in the 1960s.

Speaking after a court officially recognised her as the love child of Belgium’s former king in October 2020, Delphine said her battle to be recognised as a royal was not about money or status.

Earlier today, she donned an elegant colourful gown as she posed alongside her long term boyfriend James O’Hare on the pink carpet at Canneseries Festival in France. 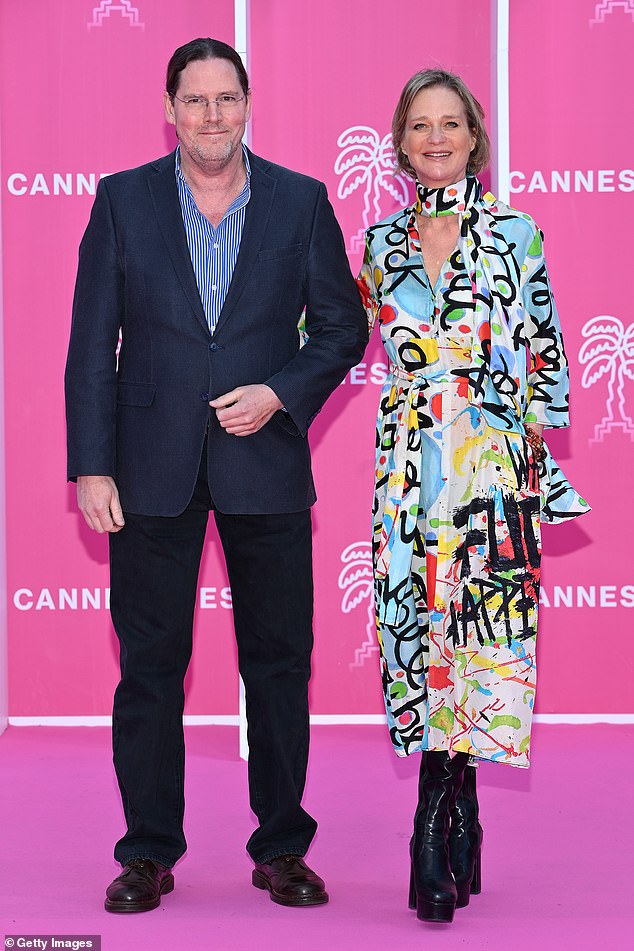 The illegitimate daughter of King Albert II of Belgium Princess Delphine, 53, formerly known as Delphine Boël, beamed as she posed alongside her boyfriend during a rare public appearance in Cannes earlier today

Earlier this year, she claimed the King had reduced her to tears when he accused the artist of pursuing her paternity claim because she ‘wanted attention’.

During their first meeting in 2013, she claimed to the VTM channel that he ‘sneered’ at her: ‘Ah, because it’s not going so well as an artist you need some attention.’

She added: ‘At that moment I thought, “how unbelievably rude is this?”

‘After the first conversation with Albert and his lawyers, I walked out of the office completely crushed and crying. 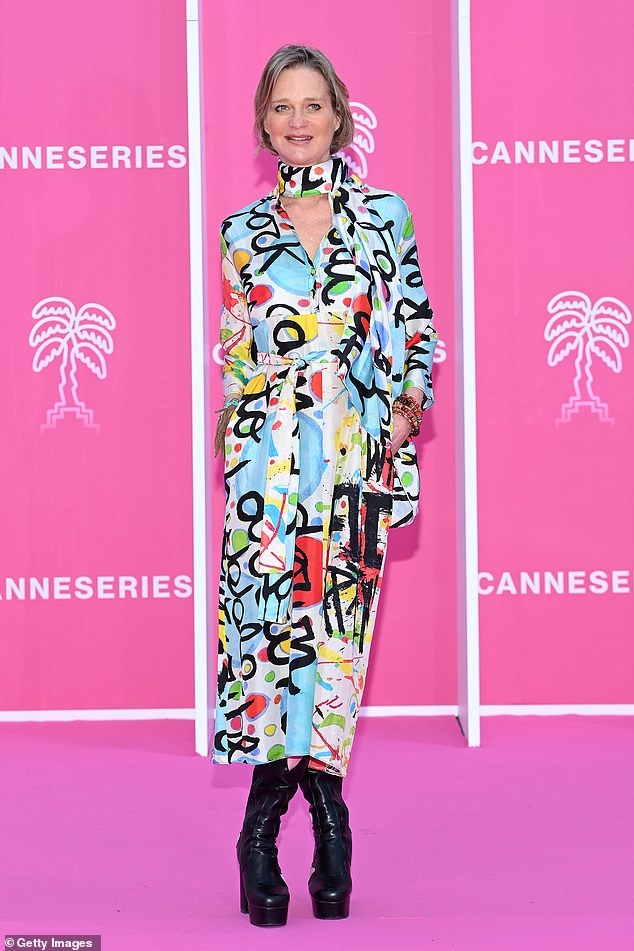 The royal, who wore a dress printed with colourful graphics across it and heavy black boots, appeared relaxed on the pink carpet 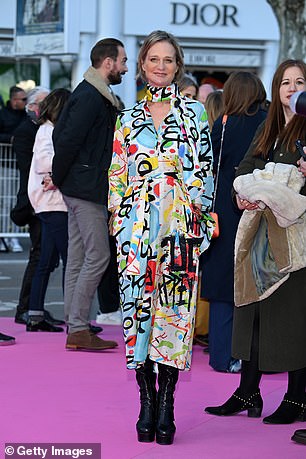 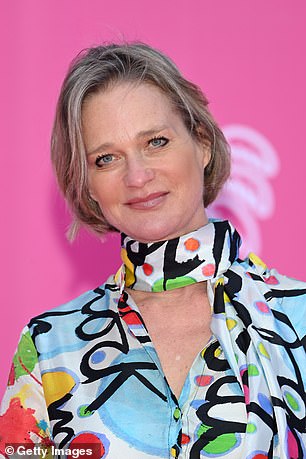 It was a rare public outing for the royal, who earlier this year spoke about the pain of bringing the paternity case against her father

‘They said I was “putting a gun to the king’s head” by going to court.’

Only a month after Delphine launched her legal bid, Albert, 87, abdicated the throne, which was handed to his son Philippe.

It would be seven years before Albert lost the case and was forced to recognise the then-Delphine Boel as his genuine daughter – before a second court battle awarded her the title Princess Delphine of Saxe-Coburg.

Princess Delphine said: ‘The first time I visited him and his lawyers, he was very nasty and made me cry.

‘I never thought I would go to court. But I did it out of a certain principle. 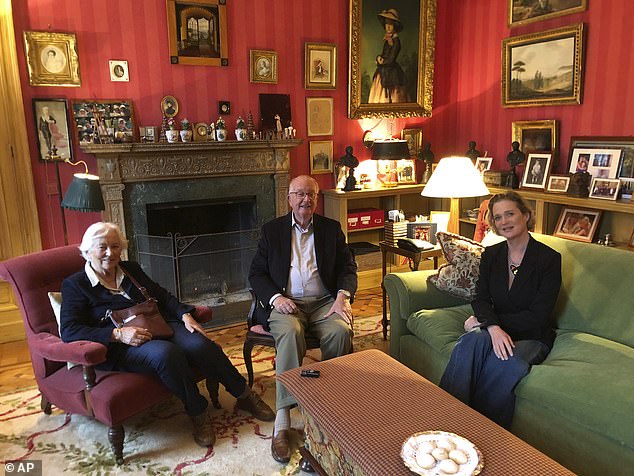 Earlier this year, she claimed the King had reduced her to tears when he accused the artist of pursuing her paternity claim because she ‘wanted attention’ (pictured meeting in 2020)

‘After Albert said I wasn’t his daughter, I needed proof. I had to know for sure.’

Delphine’s mother, Baroness Sybille de Selys Longchamps, now 80, had begun an affair with Albert in 1966, when he was the crown prince.

Albert married Queen Paola in 1959 and always played down rumours that he was Delphine’s father, referring to his affair with her mother as ‘a crisis’, reports the Times.

Albert kept in close contact with the baroness and Delphine, who was born in 1968.

But when she turned 16 in 1984, the soon-to-be king – who ascended to the throne in 1993 – distanced himself from the pair to preserve his marriage.

Delphine only found out that he was actually her father a year later, at the age of 17.

She told the documentary: ‘It was wonderful when she told me. 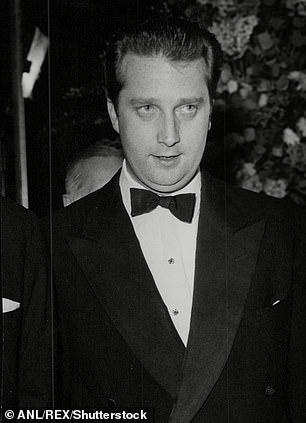 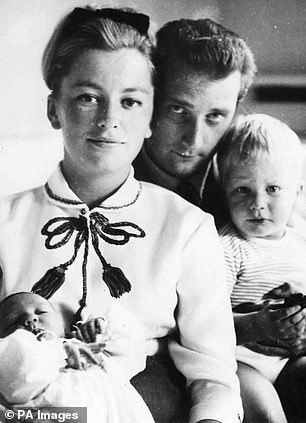 Left: Albert II before he was made king. Right: Albert pictured with Queen Paola, his son Phillipe, born in 1960, and daughter Princess Astrid, born in 1962 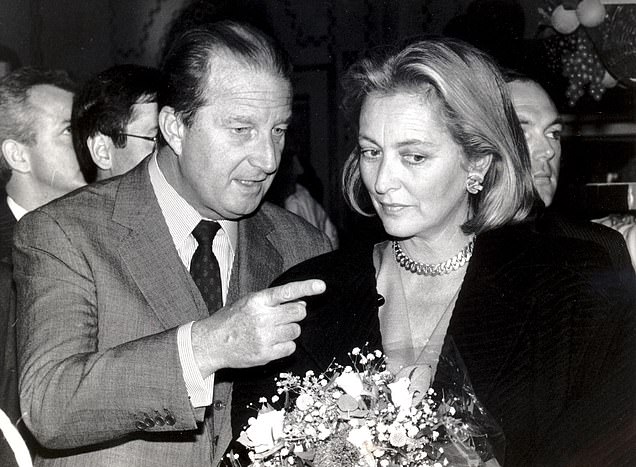 ‘Not about who he was, because I didn’t care about the fact that he was a prince.

‘But I was relieved . . . although I immediately understood that that would cause a scandal.’

The rumours of the paternity issue began swirling in 1997 and became stronger in 2001. It was then that Albert ceased contact with Delphine.

She said: ‘I never felt close to him. I called him “daddy” because I was instructed to call him that. But I never felt that way.’

Delphine needed answers after being branded a ‘high financial risk’ by the banks – leaving her unable to open accounts for her children Josephine and Oscar, who she gave birth to in 2003 and 2008 respectively with her partner and US businessman Jim O’Hare.

She explained: ‘My life and that of my children had become unnecessarily difficult and at one point it became unbearable.

‘When I wanted to open a bank account for my children, it was a problem. I saw that my son Oscar was referred to as PEP: a “politically exposed person” who had been blacklisted.’

Her children have since been made an official royals – joining 20 other Belgian princes and princesses.

Delphine says she has healed the relationship with her father and retells the moment she had an emotional meeting with Albert and Paola at their lavish home in Belvedere Castle in Laeken in October 2020.

‘Today I enjoy a cordial and mutually respectful relationship. But I keep my specific interaction with them private,’ she said.

‘I get on well with the royal family and I like them. They have been hospitable.’

The meeting was described by the palace as a time of ‘forgiveness, healing and reconciliation’ after the lengthy court battle.

A joint statement said: ‘On Sunday 25 October a new chapter, rich of emotion, peace of mind, understanding and hope was begun.

‘During our meeting in Castle Belvédère each of us, in serenity and empathy, managed to express their feelings and experiences.

‘After the uproar, the suffering and the injuries, it is now time for forgiveness, healing and reconciliation.

‘Together we have decided on this new path. This will take patience and effort, but we are determined.

‘These are the first step in a path that we will walk in peace. Delphine, Paola and Albert.’

The princess met her half-brother King Philippe for the first time earlier that month.

The monarch said it was a ‘warm meeting’ which took place at the Castle of Laeken on Friday October 9, 2020.

In a joint statement shared to the Belgian royal family’s Facebook page, Philippe, 60, and Delphine – who shared a photograph of them socially distanced – said: ‘This extensive and special conversation gave us the opportunity to get to know each other.

In a joint statement shared to the Belgian royal family’s Facebook page, Philippe and Delphine said: ‘This extensive and special conversation gave us the opportunity to get to know each other’

‘We have spoken about our own lives and our common interests. This bond will develop further in family context.’

Speaking after a court officially recognised her as the love child of Belgium’s former king, Delphine said her battle to be recognised as a royal was not about money or status.

She explained that her mother’s husband, wealthy industrialist and aristocrat Jacques Boel, is ‘much richer than the royal family’.

Delphine also revealed she will not be using the ‘Her Royal Highness’ prefix, adding: ‘I just wanted to be the same as my brother and my sister.’

She told Belgian radio show Matin Premiere: ‘I feel like I have a right to exist. Not to exist in the royal family but as me.

‘My decision to call for help through the law, I feel today that it was the right thing to do… The judicial system said that I was right and that I had the right to exist.’