Louis Levi Oakes, the last of the Mohawk code talkers, who helped American soldiers triumph in the Pacific Theater during World War II, along with code talkers from other tribes, died on May 28 at a care facility near his home on the Akwesasne Mohawk Reservation in Quebec. He was 94.

The death was confirmed by his granddaughter Teresa Oakes.

The code talkers, a group of several hundred soldiers, used their indigenous languages to create impenetrable ciphers as a way of securely relaying vital information on the battlefield. Most of them were Navajos, more than 400 of whom participated in an extensive Marine Corps program.

But code talkers from other tribes, including the Hopi, Comanche and Mohawk, also played a role. Mr. Oakes was one of about 24 from the Mohawk tribe, whose lands are mostly in upstate New York and Canada.

David A. Hatch, the National Security Agency’s senior historian, said in an interview on Tuesday that about 30 indigenous languages were used in battle and that about 10, including Mohawk, became the basis for more complicated codes, in which traditional words or phrases became metaphors for matériel. The word for “turtle,” for instance, might be used for tank.

Mr. Oakes, who was a technician fourth grade in the Army and served in New Guinea, the Philippines and the South Pacific, never spoke much about his service.

“All he ever told us was that they gave him a piece of paper and said, ‘Say this in Mohawk to somebody else on the line,’ and he just did what he was told,” his granddaughter said.

Louis Levi Oakes was born on Jan. 23, 1925, in St. Regis, Quebec, to Angus and Mary (Porke) Oakes. His Mohawk name was Tahakietakwa, which his granddaughter said roughly translates as “He carries the snow.” 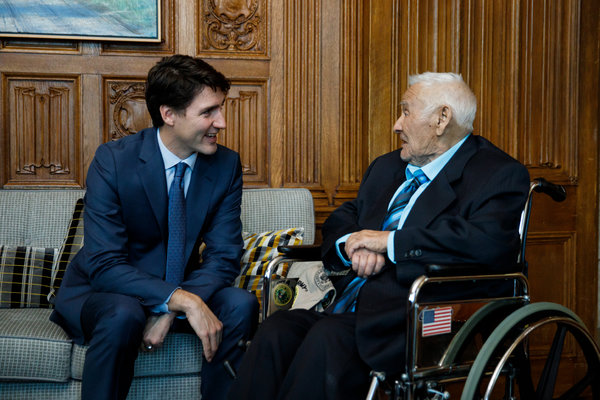 He went to high school on the reservation and enlisted at 18. He trained at Fort Drum in upstate New York before moving to a base in Louisiana, where he became a code talker after Army officials learned he was fluent in Mohawk.

Honorably discharged in 1946, he returned to the reservation and would travel to Buffalo for jobs as an ironworker. He married Annabelle Mitchell, who was also a Mohawk, in the late 1940s, and later joined the reservation’s public works department.

The efforts of code talkers from other Native American backgrounds have not been as well documented as those of the Navajo, and less has been known about their contributions to the war effort, although that is changing, Mr. Hatch said.

The code talker program was not fully declassified until 1968, and even then it took decades for the nation to become aware of the contributions of indigenous soldiers in World War II. Their service has since been chronicled in books and in the 2002 film “Windtalkers,” which starred Adam Beach and Nicolas Cage. The code talkers also inspired a G.I. Joe action figure, which speaks in both English and Navajo.

In 2001, President George W. Bush presented the 29 creators of the Navajo code with the Congressional Gold Medal, most of them posthumously. Chester Nez, the last of that group, died in 2014.

There are five surviving Navajo code talkers, said Hope MacDonald Lone Tree, a staff assistant to the speaker of the Navajo Council.

In 2008, Congress passed the Code Talkers Recognition Act, and in 2016, Mr. Oakes, along with other Mohawk code talkers, was awarded the Congressional Silver Medal for his service. By then he was the last living Mohawk code talker. Last December, he appeared at the Canadian House of Commons and met with Prime Minister Justin Trudeau.

In addition to his granddaughter, Mr. Oakes is survived by three daughters, Diane Swamp and Dora and Debra Oakes; four sons, Louis, Raymond, Wallace and Joseph; and many grandchildren, great-grandchildren and great-great grandchildren. His wife died in 2012.

Dr. Patricia Bath, 76, Who Took On Blindness and Earned a Patent, Dies