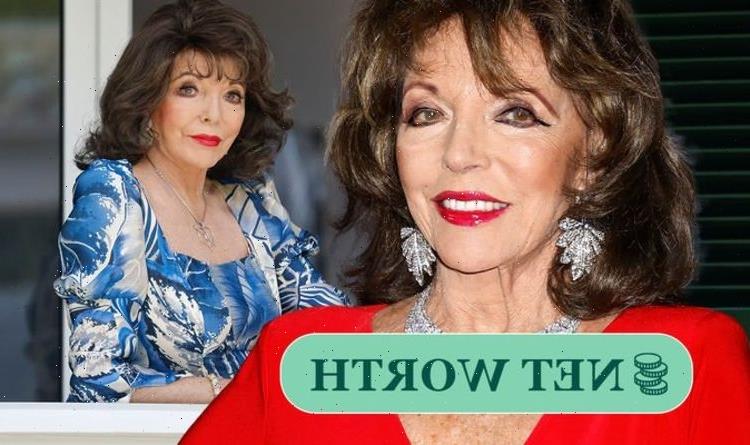 Joan Collins started acting at the age of just nine when she was cast in Henrik Ibsen’s play A Doll’s House. By the age of 16, she was training as an actress at the Royal Academy of Dramatic Arts before she signed with British film studio Rank Organisation. How much has she made throughout her career?

According to Celebrity Net Worth, Joan is worth a huge £20million.

The majority of her fortune came from her iconic role as Alexis Colby in Dynasty which ran from 1981 to 1989.

However, the 88-year-old took to the spotlight many years before her role in the soap opera.

She made her film debut in 1951 with the comedy Lady Godiva Rides Again with other roles in The Woman’s Angle, Judgment Deferred and Decameron Nights.

Joan’s Hollywood debut came in 1955 with the historical drama The Virgin Queens.

She also had a leading role in the 1956 Golden Globe-nominated comedy musical The Opposite Sex thanks to her seven year contract with 20th Century Fox.

As well as films, Joan also starred in several popular TV shows, including The Man From U.N.C.L.E. and Star Trek.

Her big break came from the US soap opera, Dynasty, where she was said to have earned around £12,000 an episode when she joined.

The show was a worldwide phenomenon and Joan was nominated six times for a Golden Globe Award.

Joan won the award in 1983, the same year she was also nominated for an Emmy for Best Actress in a Drama Series.

Collins was awarded a star on the Hollywood Walk of Fame in 1983 for her impressive career achievements.

In 2015 she was made a Dame Commander of the Order of the British Empire (DBE).

The actress has been honoured for her charity work several times throughout her career, including her work with the NSPCC and breast cancer research.

She is also patron of the children’s hospice charity Shooting Star Chase.

In her personal life, Joan has been married five times including her first marriage with Irish actor Maxwell Reed.

She then married English actor Anthony Newley in 1963 and had two children with him.

Joan then had a daughter with her third husband, businessman Ross Kass.

After they separated, the actress married pop star Peter Holm before divorcing and marrying Peter Gibson in 2002.

Joan also has an interest in real estate, with properties across the world.

The actress and her three grandchildren split their time between the cities, including spending the summer at her luxurious St Tropez property.

Playgrounds of the Rich and Famous starts tonight on Channel 5 at 8pm.