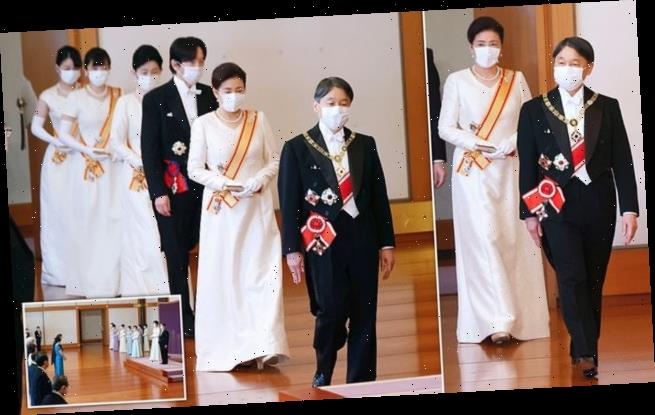 The imperial family of Japan have started 2021 with a low-key reception in tune with the state of the country following the coronavirus pandemic.

Emperor Naruhito, 60 and Empress Masako, 57, took part in the New Year’s Reception in Tokyo, along with 12 other members of the imperial royal family and 230 guests.

The reception, which counted 758 guests in 2020, was only attended by 230 people this year, and all were wearing masks with social distancing guidelines were in place.

Japan has since declared a state of emergency for Tokyo and its surrounding areas after a surge in Covid-19 cases. 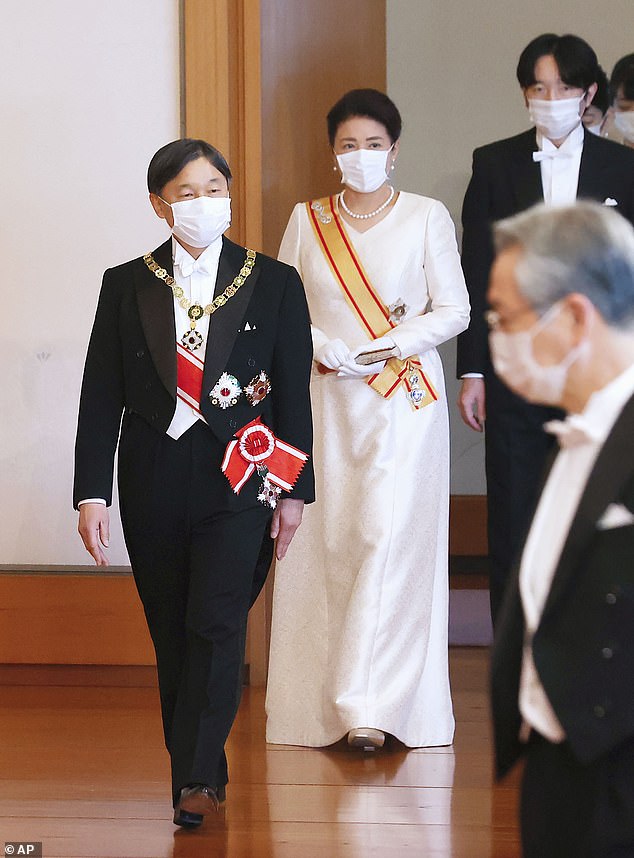 The emperor and his wife looked relaxed and poised during the event in Tokyo. Empress Masako was wearing an customary white gown with long sleeves and gloves accessorised with the imperial family’s red and gold sash.

Princess Kiko, Mako and Kako were also wearing white but their dresses were of different cuts, with Princess Kiko sporting long sleeves like her sister-in-law and the younger princesses wearing short sleeves and sweatheart necklines.

All Princesses wore white gloves as well and the red and gold imperial sash.

All women wore their dark hair put in neat buns, and sported little make-up, while the men wore tuxedos. 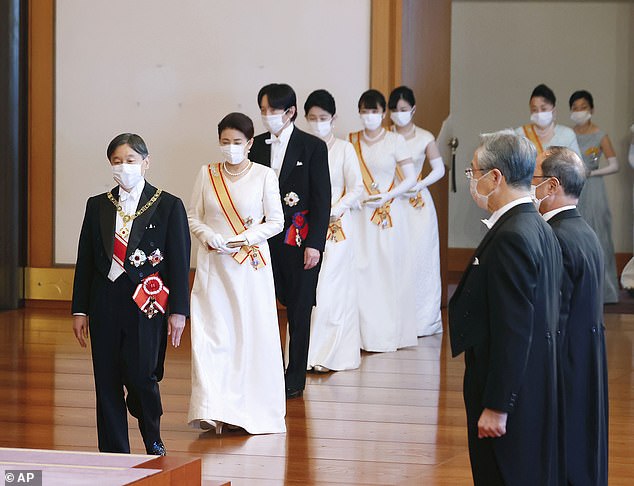 All members of the imperial household present, as well as guests, wore face masks, in keeping with the coronavirus regulations 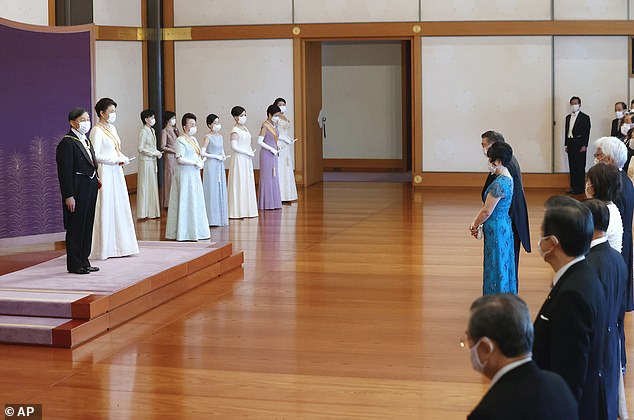 Social distancing was in place during the reception. The Japanese Prime Minister Yoshihide Suga presented his respect with his wife (right)

When it came to jewellery, Masako, Kiko, Mako and Kako all wore a discreet pearl necklace. The Empress and her sister-in-law were both wearing matching drop pearl earrings.

This was a stark contrast to last year, which saw Kiko sport a lavish tiara at her first reception as Empress after Naruhito ascended the chrysanthemum throne in May 2019.

Last year, the empress’s tiara was made of diamonds, as were her drop earrings. She was also wearing a diamond necklace around her neck, with a matching diamond bracelet. 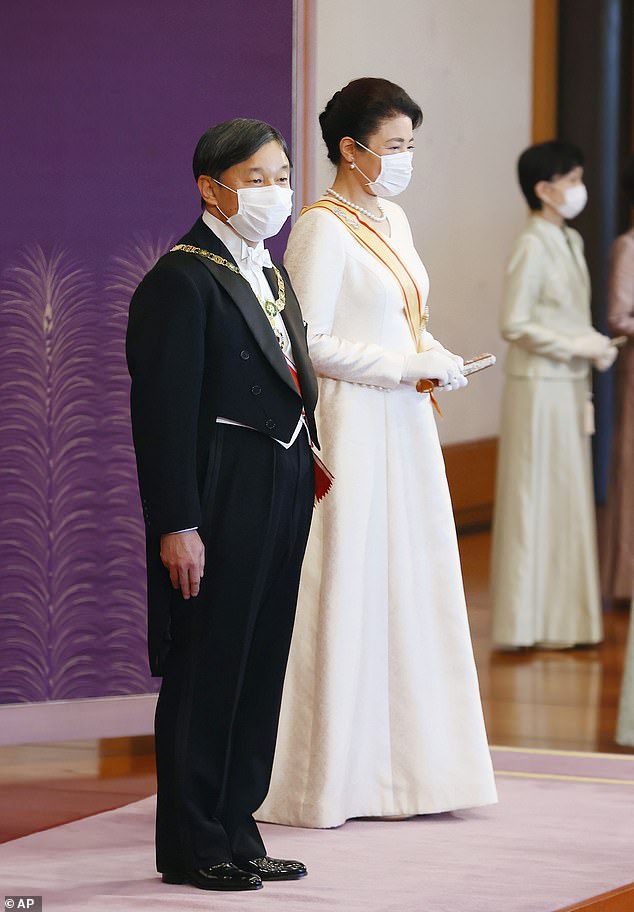 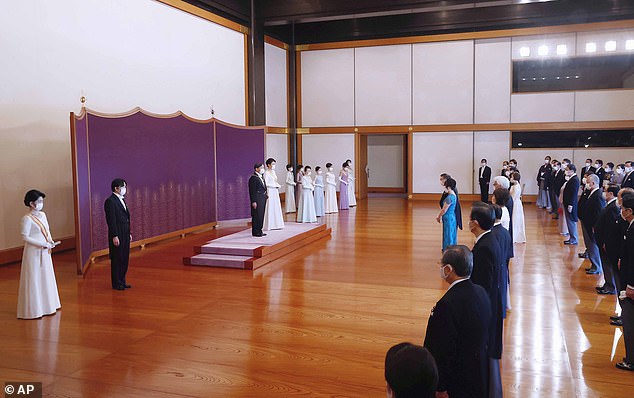 Guests stood next to each other, leaving enough distance to limit the chance of spreading the disease (pictured)

Princesses Kiko, Mako and Kiko also donned sparkling jewels for the occasion, as did the other female members of the imperial household.

The couple marked the New Year with a video message which was shared with the public.

Usually, crows gather under the balcony of the Imperial Palace in Tokyo to catch a glimpse of the emperor and his family. In his annual address, the Emperor acknowledged the hardship the pandemic had brought onto Japan, and expressed his gratitude to healthcare staff who worked tirelessly throughout 2020.

‘Over this past year, we have all faced many problems and hardships over the spread of this unknown coronavirus that for most of us living in this age have never experienced on such a scale,’ he said. 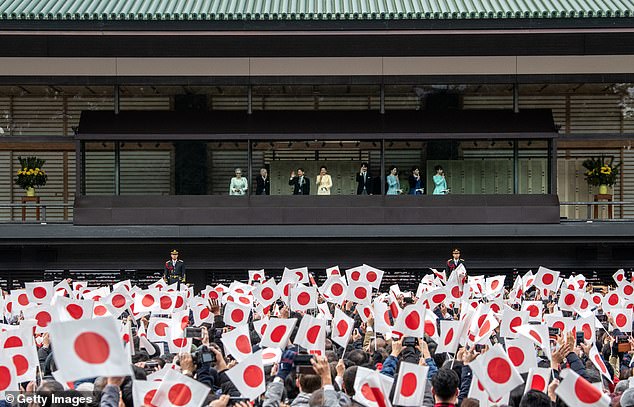 January 2020: Crowds gather in front of the Imperial Palace in Tokyo to hear Emperor Naruhito’s address. This year, the emperor and his wife have released a video message

He also said he was worried about the discrimination suffered by those who had been sick or worked in the medical field, a phenomenon widespread in conformist Japan.

‘I look forward with all my heart to be able to meet with all of you again, face to face,” he said, after offering his prayers for world peace,’ he added.

Empress Masako, who reportedly prefers to say reclusive due to a stress-related condition, joined her husband in sending a message of support to the Japanese public during the address.

She said said ‘Happy New Year,’ at the start of the message and spoke for the last 30 seconds of the nearly seven-minute message. Her beige suit matched the color of Naruhito´s tie. 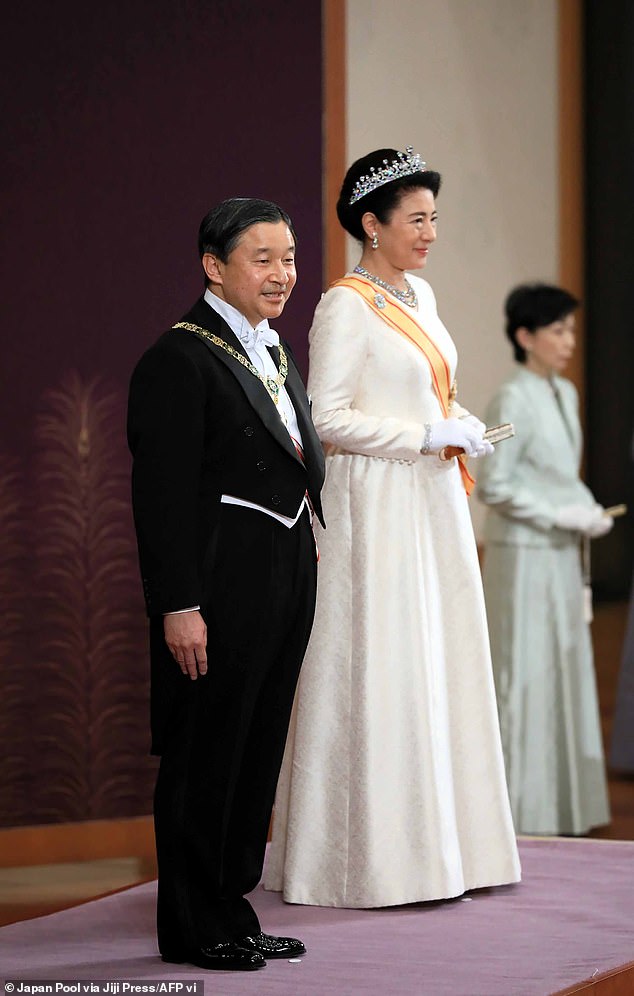 In January 2020, the Empress sported a diamond tiara for the occasion,as well as diamond earrings, a diamond necklace and matching bracelet 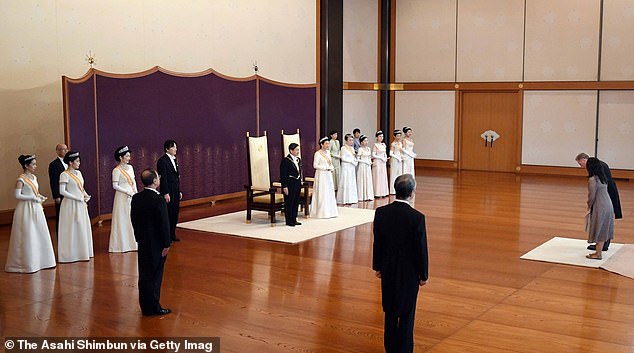 Last year, the Princesses of the Imperial household all sported tiaras for the reception on January 1 (pictured)

‘I am praying from the bottom of my heart that this year will be as gentle a year as possible for all of you. This winter has been harsh with heavy snow in some areas earlier than usual, and so please everyone do stay healthy,’ Masako said.

The video message was Naruhito’s first. His father Emperor Emeritus Akihito did two, after the tsunami disaster in northeastern Japan in 2011 and when he announced his abdication in 2016.

Instead of the usual family picture delivered to the public each year, the family have taken separate pictures, with Naruhito and Prince Fuhimito snapped with their respective spouses and children, as opposed to together. 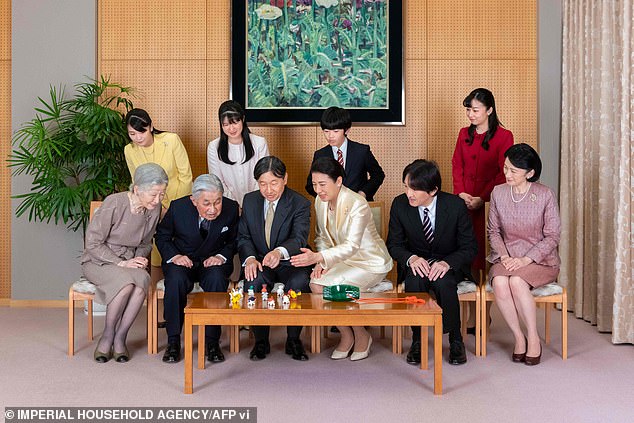 Japan’s Prime Minister Yoshihide Suga has declared a state of emergency for Tokyo and its surrounding areas today after a surge in covid-19 cases.

Cases are believed to be as high as they were at the start of the pandemic, CNN reported.

The state of emergency is set to remain in place until February 2, and will see the Nippon capital under a set of restrictions.

This brings the national total to 259,105 cases since the start of the apndemic, with at least 3,804 fatalities.