They have no loos or showers… and now they won’t be driving home for Christmas: JANE FRYER highlights the plight of lorry drivers stuck in huge queues at Dover

The lorries begin a good 30 miles before you reach Dover. They fill every metre of every lay-by and parking bay. They are perched on the side of roads.

They clog up country lanes, line the verges and loom out of the fog in ghostly phalanxes.

There are thousands of them, from Romania, Poland, the Ukraine, Spain, Turkey, Ireland and, of course, the UK.

Most look empty, but none are. Some drivers are sleeping in their cabins. 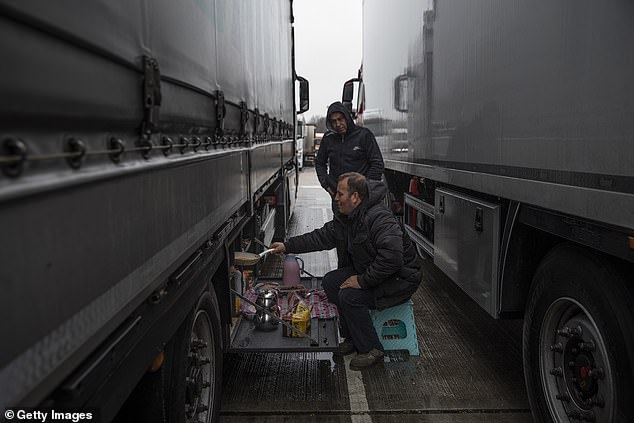 Some drivers are sleeping in their cabins. Others are heating soup on camping stoves in their empty containers (pictured: A driver eating breakfast out of his lorry)

Others are watching telly or listening to the radio or trying to soothe angry relatives on the phone.

Some are heating soup on camping stoves in their empty containers, stamping their feet to keep warm and wondering when they’ll next enjoy a shower.

Thanks to President Macron’s shock decision to close the French border on Sunday night, not one of them is where they should be right now.

Most are in the wrong country and all are fast giving up hope of getting home for Christmas.

Graham Tegg, 63, who lives near Pontypridd, Wales, should be in Holland right now delivering a lorry-load of Heineken labels and then motoring home in time for his turkey dinner with his wife Kay. 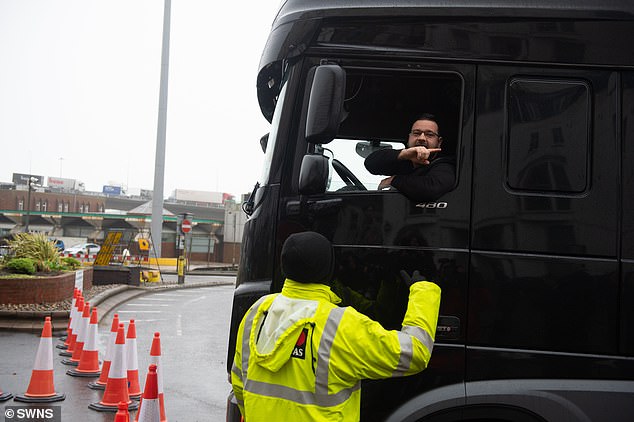 Despite warning signs saying ‘French Borders Closed’, drivers keep rolling up with a surprising number completely oblivious to the shutdown (pictured: A lorry driver argues with staff at the entrance to Port of Dover)

But since Saturday, he and his truck have been wedged into a corner of an overflow lorry park in the port of Dover, waiting, waiting, waiting, with hundreds of other lorry drivers as the chaos unfolds around him and the nearby shops lie empty of food, drink and other essentials.

‘It doesn’t make sense. We’re lorry drivers, we’re in our own bubble. We don’t really mix with anyone,’ he says.

‘I’m usually a very patient person, but I’ve been away from home three weeks already.

A few hundred yards away, a group of drivers from Birmingham are making the best of things and drinking beer in the rain.

Meanwhile, haulier Matt Richards, 50, from Wolverhampton, is stuck in his vehicle in the forecourt of a local BP garage. He’s been here since 8pm on Sunday night, when he and his load of Land Rover parts became blocked in by other trucks.

Last week, he delivered two £1million Covid-19 test- ing machines to Toulouse in France. Next week he was set to take more to Italy but now it’s looking unlikely.

‘I’ve been driving to Europe for 30 years and I remember getting stuck in Romania in the 1990s ahead of Christmas when there was a hard border,’ he says.

‘I only want to get home to Wolverhampton now.’

Of course he does! Though the grim truth is that it’s hard to see the authorities unravelling this mess very quickly.

Even despite Operation Stack – the closure of a 23-mile long section of the M20 to turn it into a lorry car park – and the conversion of the disused Manston International Airport, near Ramsgate, into a giant lorry park, complete with loos, floodlights and a Covid testing site next door as part of the post-Brexit logistics – Dover itself is almost gridlocked with trucks, all searching for that Holy Grail, a parking space with loo and shower facilities. 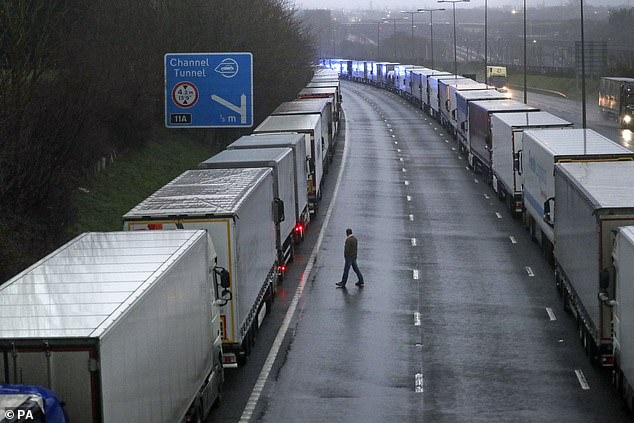 The lorries begin a good 30 miles before you reach Dover. They fill every metre of every lay-by and parking bay. They are perched on the side of roads (pictured: Lorries parked on the M20)

And despite the news and the warning signs all over the south of the country saying ‘French Borders Closed’, drivers keep rolling up – tired, weary, and a surprising number completely oblivious to the shutdown – at the port’s main entrance to be greeted by two port staff in high-visibility coats who shout ‘No lorries! It’s shut!’ over and over and over.

Despite the difficult circumstances and perhaps because of their unusually solitary jobs, pretty much every trucker I speak to is friendly and charming and very, very chatty.

Often they explain that while they are trained to sit happily in a traffic jam for hours, their patience does not extend to supermarket queues or political shenanigans between rival European countries.

‘They have done this because of the Brexit battle over the waters,’ says Graham. ‘And now the French are taking it out on us. But they’ll lose out because so much of our cargo is going over there.’

Not just in the lorry parks and lay-bys but among the security guards standing in the pouring rain at Manston Airfield where, come 2.30pm, for some reason not a single HGV had turned up.

But also in Dover, in the houses and hotels adjacent to the port’s main entrance where, come mid- afternoon, a Polish lorry driver is so angry to discover that the port is closed he drives round and round the roundabout blasting his horn until a furious woman sprints out of the East Cliff Hotel in a very skimpy dressing gown to give him a not very festive piece of her mind, as he swears back.

Neither is at their best. But why should they be? This is a bloody nightmare. The town is gridlocked, the lorry drivers are far from home and no one has a clue what’s going on or has much confidence for the future.

‘God only knows what’s going to happen after New Year,’ says Graham. ‘Maybe every day will be like this. But I bloody well hope not!’

John Mulaney has checked into rehab for 60 days for alcohol and cocaine addiction, reports say