Welcome to London, President Trump. That’s what Simon Schama, the man who puts the ug in smug, wasn’t saying on Sky News and BBC News, before going back to Sky then returning to the Beeb to not say it all over again. And again.

As the President of the United States began his visit to the UK, the Trump- hating historian was passing himself around the broadcasters like a tray of poisoned teacakes; one soundbite and we were all choking.

‘There is a bad smell over London today. We are trying to be friendly with the hyena,’ he fumed on Sky News, shortly before 10am. 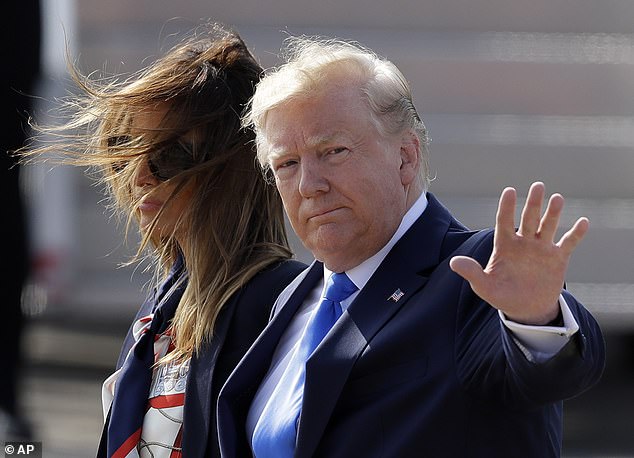 Historian Simon Schama was allowed to rant about the president unchecked ahead of the State Visit (pictured, Donald Trump and First Lady Melania arrive at Stansted Airport)

‘I know state visits have been extended to criminals, gangsters and buffoons – there’s no reason to add another one.’

Later on BBC News, Schama was allowed to rant unchecked over the 41-gun salute and at one point called Trump an egomaniac, which he pronounced ‘eggo-maniac’, but by then his big academic brain had scrambled with pure fury.

He even voiced a fear that Her Majesty might catch something by shaking hands with Trump, a despicable and childish utterance.

‘I hope the Queen has some hand sanitizer,’ he said, his dandelion aureole of hair standing on end at the sheer horror of it all.

Schama was telling anyone who would listen that the visit of this ‘morally degraded’ US President was a worthless and pointless occasion, but it was not entirely without merit.

For a start, it gave Simon and others like him the opportunity to luxuriate publicly in the warm balm of Trump hate, something that brings out the very worst in the very worst kind of frothing Lefties.

Like many, I have misgivings about Trump, but the level of abuse and the open contempt about him that flourished unchecked across all channels yesterday does this country a disservice.

Victoria Derbyshire even had a replica of the Trump baby balloon in her BBC2 studio – would she have done the same with an effigy that mocked Barack Obama? I think we all know the answer to that. 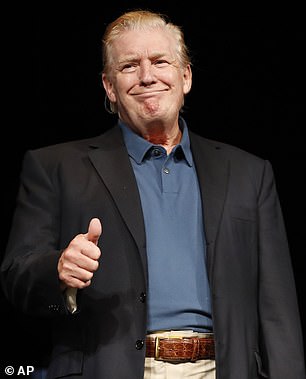 Pictured: Donald Trump at the McLean Bible Church in Vienna

Meanwhile, over on Sky, Left-wing pundit Owen Jones relished the opportunity to go full Trump tonto. ‘Why should we show respect to a man who talks of grabbing women by their delicate parts?’ he cried, clutching his pearls, before blaming Trump entirely for ‘the rise of racism and fascism across the Western Hemisphere’.

The early-evening news coverage on the BBC was dominated by negative stories about the President, particularly his ‘bruising’ tweet about London Mayor Sadiq Khan. Yet it seems to be regarded as perfectly acceptable that Khan, Jones and others can call the American President an ‘extreme Right-winger,’ while Schama likened him to Mussolini.

‘He is a liar, he is racist and he is sexist,’ raged Cardiff MP Stephen Doughty. Shouldn’t he be more concerned about his own constituents than railing against the leader of the Free World?

Not everyone likes Mr Trump, but he is neither Nazi nor tyrant, but a democratically elected President who has come to the UK to commemorate the anniversary of D-Day – something that represents and celebrates the very best of both our countries. And it might be a bit more respectful and fitting for the BBC to remember that over the next few days.

Even BBC American correspondent Jon Sopel talked over the national anthem when it was played at Buckingham Palace. What is going on?

Thank heavens for Melania Trump, a fascinating enigma who glided through the day in a selection of luscious outfits, impossibly high heels and a My Fair Lady hat.

‘Do you happen to know what Melania is wearing?’ the BBC’s Simon McCoy asked his colleague, royal correspondent Daniela Relph. ‘No,’ she replied, with admirable honesty.

‘I am reliably told it is Dolce & Gabbana,’ said Simon, with the air of a man who thought they made lawnmowers until five minutes ago.

Blissfully unaware of the showy invective being hurled towards the President by a bunch of nobodies who didn’t matter anyway, Melania stood next to her Donald all day without ever seeming to acknowledge his presence, or even glance in his direction.

A glacier of composure and elegance, she somehow manages to humanise the man at her side without paying him any attention whatsoever. Very much like Kay Burley when her colleague, my favourite royal expert Alastair Bruce, starts talking about the head-sweat problems suffered by guardsmen under their bearskin hats and how the royals cut their sandwiches.

Apart from the terror of the Melania perma frost, we learned from one expert that the President is being protected by three more rings of security on this visit; the Metropolitan Police, the American Secret Service and then the ‘very highly trained’ presidential protection detail.

Trump was driven around London in a limousine equipped with puncture-resistant tyres, tear-gas launchers and bullet-proof windows. Only an eggo-maniac would have believed he heard or cared about one word of Simon Schama’s howling diatribe. Good.