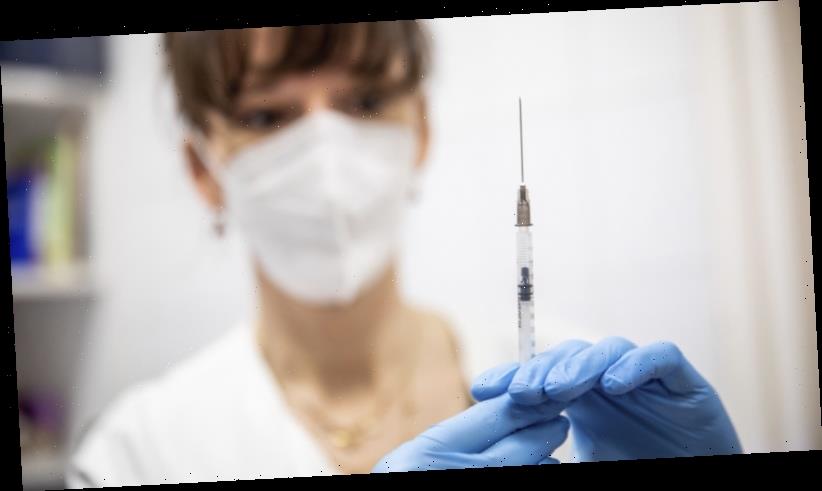 Australians will be able to tap and display COVID-19 “proof of vaccination” certificates on their phones or carry hard copies with them under plans being finalised by the Morrison government ahead of the rollout of vaccines later this month.

The Express Plus Medicare app and Australians’ MyGov accounts will both hold digital proof of vaccination certificates, while vaccine providers and Services Australia offices will be able to print out certificates too.

Down the track, retrieving your vaccination certificate could be as simple as double tapping asmartphone to access the certificate in a digital wallet. 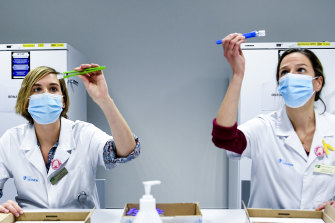 Health workers in Belgium inspect vials of the Pfizer-BioNTech coronavirus COVID-19 vaccine, which is one of the candidates expected to receive approval in Australia by the end of January.Credit:AP

The rollout of the certificates program has gone to the federal cabinet and The Sun-Herald and The Sunday Age can reveal detailed discussions were held in the cabinet about the project 10 days ago.

Final cabinet approval is due in the next two weeks, and an update to the Express Plus Medicare app is due shortly.

This will allow people’s immunisation history statements to display proof of their COVID-19 immunisation status. The Pfizer vaccine is scheduled to be rolled out in Australia from the end of February, and the AstraZeneca vaccine is due in March.

Vaccine certificates are expected to play a key role in allowing Australians more straightforward access to nursing homes and hospitals, where at-risk populations live, and potentially even to cross state borders in the event of future lockdowns.

The certificates will also be important as Australia looks to begin reopening its international borders later this year to allow people to leave the country and travellers to arrive from overseas.

The vaccine certificate project is being driven by Health Minister Greg Hunt and Government Services Minister Stuart Robert, who has responsibility for MyGov and Centrelinkwhich have a crucial role to play in the vaccine rollout.

On Friday, Prime Minister Scott Morrison asked the head of his department, Phil Gaetjens, to plot a path to a post-pandemic Australia in which virus outbreaks would be managed without locking down cities. Vaccine certificates will play an important part of that project.

“In preparation for the COVID-19 vaccine rollout, Services Australia has made critical enhancements to the Australian Immunisation Register, including increasing system capacity so more customers can access their information on the register at the same time, new AIR functionality to capture more detailed information about vaccines given, and updating immunisation history statements to show all COVID-19 vaccine doses,” he said.

”We will continue to improve our systems throughout the COVID-19 vaccine rollout to support a faster return to normal life for Australians. This includes making it faster and easier to securely access proof of COVID-19 vaccination, which could include improvements in how Australians store or access their immunisation history statement.“ 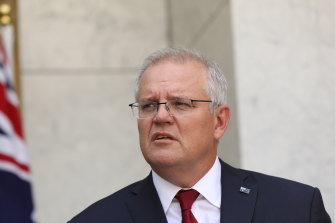 Work is also under way within the federal government – including in the Health Department, Services Australia and the Department of Home Affairs – on creating a certificate that will be recognised by other countries, and recognising other countries’ vaccine certificates.

With countries such as Singapore and Britain, for example, mutual recognition of vaccine certificates could be relatively straightforward.

Britain is issuing vaccine certificates the size of a credit card to recipients and the document records details of the vaccine given, the date, and the reminder to get a second jab.

Singapore plans to roll out both a physical vaccination card and a digital card that can be downloaded from its national immunisation register.

Last week, new laws were passed by federal Parliament that make it mandatory for vaccine providers, such as doctors and pharmacists, to record all vaccinations on the national register, including the forthcoming COVID-19 jab. Reporting vaccinations had previously been voluntary.

A spokesman for Prime Minister Scott Morrison said the government wanted to make it as easy as possible to receive a COVID-19 vaccination, which will be free.

“As we get closer to administering the first jabs late this month, we’re also working through exactly how people can book in to get their vaccine, and how people can show they’ve had their shots.”

Last week, Mr Morrison announced Australia had secured an extra 10 million doses of the Pfizer vaccine, on top of the 10 million already agreed to. That takes the total number of vaccines Australia has purchased about 150 million, including 20 million Pfizer, 53.8 million Oxford-AstraZeneca, 51 million Novavax and 30 million through the global COVAX facility.

Get our Coronavirus Update newsletter

Stay across the news you need to know related to the pandemic. Sent Monday and Thursday. Sign up here.