Home » Lifestyle » ‘It was like I’d never done it before’: how Sally Rooney wrote again

‘It was like I’d never done it before’: how Sally Rooney wrote again

“Every day I wonder why my life has turned out this way,” a millionaire novelist named Alice writes to her friend Eileen in Sally Rooney’s Beautiful World, Where Are You. “I never advertised myself as a psychologically robust person, capable of withstanding extensive public inquiries into my personality and upbringing.”

Neither did Rooney. “This sounds terrible, but I’m trying not to have a meltdown about doing more publicity,” she said during a video interview in July from a hotel room in Dublin. She’d taken the train in that morning from Castlebar, a town on the other side of Ireland where she lives with her husband, John Prasifka.

“I like my controlled life,” she said. “I live in the countryside, and I like to be kind of secluded, and to have my work as the main thing.” 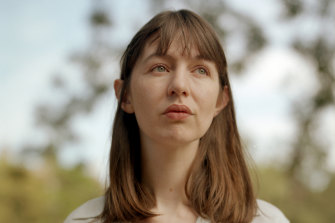 “I’m trying not to have a meltdown”: Sally Rooney in Dublin in July.Credit:New York Times

Unfortunately for her, that level of isolation is no longer possible.

Since the release of her 2017 debut, Conversations with Friends, and her Booker Prize-longlisted Normal People in 2018, Rooney, 30, has become the kind of bestselling, critically praised author whose popularity somehow eclipses the books themselves, her name an easy shorthand for a certain cultural sensibility, even to those who haven’t read a word she’s written.

She has been called, for example, the first great millennial novelist, and “Salinger for the Snapchat generation.” She drew such a large audience to a Brooklyn reading in 2019 that it was relocated from a bookstore to a nearby church. Earlier this month, The Wall Street Journal reported that advance copies of Beautiful World were selling on eBay for $US200.

Beautiful World, Where Are You focuses on the friendship between Alice and Eileen, an editorial assistant at a literary magazine, as they enter their 30s and develop romantic relationships: Alice with a warehouse worker named Felix, and Eileen with her childhood friend Simon, a political adviser.

Rooney wrote Alice, who’s recently been hospitalised for a psychiatric break after doing publicity for her two novels, as a way of working through a level of attention the author herself found difficult to endure. “I hope I don’t regret saying this, but I think that is why I had to write this book,” Rooney said. “Because my life had become so dominated for a time by the success of my previous two.”

That said, she didn’t intend to make the jaded millionaire the story’s centre of gravity. “My dad fixed phone lines for a living,” she said. “I’m not from a background where people like Felix aren’t in my family.”

Rooney knows how many writers would kill to be in her position. But that’s her point: Everyone loses, except capitalism. “The culture around authorship is not really benefiting anyone,” she said, “even the people whom it appears to be benefiting the most.”

Financially speaking, the Celebrity Industrial Complex is benefiting Rooney handsomely. A Marxist, she thinks she should get paid to write books, just not “multiples more” than her husband makes teaching high school math, or more than anyone else gets paid to do what they do.

Rooney began Beautiful World in 2018, before the release of Normal People. She continued writing it on a fellowship at the Cullman Centre at the New York Public Library in the fall of 2019. It was the first time she’d ever lived abroad.

By then, her first novels had brought her literary fame, but the peak-pandemic, April 2020 release of the BBC Three/Hulu series Normal People took it to another level. “It almost terrifies me, looking back, how little I knew about what I was getting myself in for,” she said of co-writing the television adaptation, and of the “overwhelming” discourse that attended it. (Recall with caution: Connell’s silver chain.) 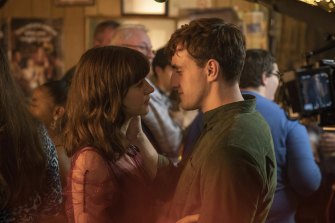 Daisy Edgar-Jones and Paul Mescal in a scene from Normal People. Credit:Hulu via AP

Once it aired, Rooney went back to Beautiful World, “started working on the early parts of the novel again, and thought, at this point, I am more famous than Alice,” she said.

On Alice’s first date with Felix, he has no idea who she is. “I don’t know if that could happen to me any more,” Rooney said. “My life has become so crazy I can’t even put it in a book.”

She’s grateful to see her characters mean so much to so many, but resents how “your name becomes a kind of floating signifier that people can attach to things that have nothing to do with you,” she said. “And you’re like, wait, no, I want that back! That’s mine! I have to use that to get an appointment with the doctor and stuff!” (She declined to participate in the forthcoming TV adaptation of Conversations with Friends to focus on this novel.)

The critical theory she could access in the library — from Simone Weil’s Gravity and Grace, to Radical Hope, by Jonathan Lear, to Ian Watt’s The Rise of the Novel — helped Rooney take a step back from her craft and view it anew.

Written just a few, crucial years earlier in her 20s, both Conversations with Friends and Normal People had all but poured out of her. “Off the top of my head is a bad way of putting it,” she said, “but I wasn’t thinking, what is a voice? What is a protagonist? It was so natural, all those questions just answered themselves as I wrote.”

By the time she got to New York, the pressures had accumulated, and she worried she’d buckle under them, never write again. “Wait, how do you write one of these?” she’d asked herself. “It was like I’d never done it before!”

Rooney speaks of all her characters as having “walked into my brain,” including the four at the centre of Beautiful World. She cited Henry James’ admiration for Turgenev, who, James wrote, saw his subjects “as disponibles, saw them subject to the chances, the complications of existence, and saw them vividly, but then had to find for them the right relations”.

She struggled with those relations, in New York and when she came back home, at the start of the pandemic in March 2020, writing version after version, in first person, in close third, purely epistolary. None of it worked.

It sounded like the difference between a child organically learning to walk and an adult re-evaluating every musculoskeletal movement involved in putting one foot in front of the other. “It was with this book that I sat down and thought, wait a minute, what is a novel?” Rooney said. “I seem to be writing them, but what are they?”

To figure it out, she read. Mitchell S. Jackson, a Pulitzer Prize winner who was in her fellowship class at the library, said, “Sally was possibly the most disciplined person there.” When she got to their offices early in the morning, he added, “she would close her door and close the blinds and work.”

When she did emerge, she impressed the other fellows with her knowledge of, as the journalist Hua Hsu recalled, “pre-Christian systems of faith to contemporary Marxist scholarship to basic internet culture”. The research was her way of reckoning with why she writes at all.

The ethics of fiction, for Rooney, is very much tied to the ethics of living. “When you inhabit a time of enormous historic crises, and you’re concerned about it,” she said, “how do you justify to yourself that the thing to which you’ve chosen to dedicate your life is making up fake people who have fake love affairs with each other?”

At times, she’s been made to feel that her work is inconsequential. “Salinger for the Snapchat generation” has the benefit of alliteration, but none of her characters spend much if any time on social media. The New Yorker once called her dialogue “casual intellectual hooliganism,” as if her characters were merely volleying knowledge like the college debaters of Rooney’s earlier life: recklessly, for no other reason than because they can.

Perhaps the most obvious manifestation of her insatiable reading, the emails in Beautiful World between Alice and Eileen – about Late Bronze Age civilisation, babies, Edouard Manet and organised religion – are no contrivance. One feels the long email to be Rooney’s preferred, perhaps most natural, mode of expression.

With her closest friends, she’ll exchange ideas about climate change, economic inequality and who broke up with whom, all in the same breath. “It would be artificial to try and reproduce some kind of compartmentalisation that I don’t feel in my real life,” she said.

For Rooney, the intimate and the ideological go hand in hand. That is, you can’t fully understand Felix and Alice’s relationship, or Eileen and Simon’s, without understanding their relative positions within the social order around them.

So, yes, she does have opinions on Dublin’s housing crisis, but even if she didn’t, “as a novelist,” she said, “I simply have to engage with the reality of the housing market because the characters have to live somewhere. They have to go home, put a key in the door and live.”

Rooney thinks it’s a “cop-out” to say she writes simply because she’s not good at anything else. (She did say this, to the Irish Independent, in 2018.) “You don’t have to be really good at trying to make a difference in the world,” she said. “You could just be mediocre at it and still try, and I’m not.”

Instead, she’s written a novel that attempts to justify not just itself, but novel writing, period.

What it comes down to, for her — and for Henry James and the Victorians, and even Felix — is some inherent, transformative value in aesthetic experience. “I want to live in a culture where people are making art, even as everything else falls apart,” Rooney said. “It gives my life meaning.”

In Beautiful World, one evening, Eileen narrates an arousing scene to Simon over the phone in which an imaginary wife takes off all his clothes, and he has sex with her. “I live for detail,” Eileen tells him. “You paint a compelling picture,” Simon says, moments before he orgasms.

Both characters, on either end of the line, are left flushed, breathing hard; perhaps the reader even feels something too. Because at the end of the world, when there’s nothing left but one another, we’ll still be moved, in spite of everything, by story.

Beautiful World, Where Are You is published on September 7 by Faber & Faber at $29.99.

‘Let your difference be your light’: the childhood advice that inspired actor Tim Omaji