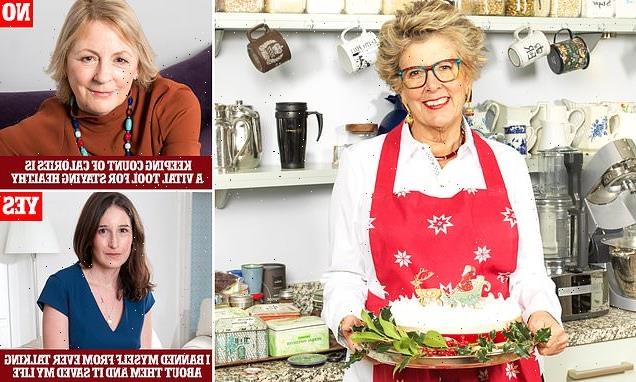 Is calorie the new C-word?

As Prue Leith hints she will drop the term from her Bake Off catchphrase… Is calorie the new C-word?

At the weekend, I got together with my mother and daughter. We ate in the garden to be Covid-safe, so no roast and healthy veggies for us.

Instead, we gorged on our favourite finger-foods: smoked salmon sandwiches, sausage rolls, miniature toads-in-the-hole — my mother’s speciality — followed by mince pies with clotted cream and Stilton on crackers.

And then, on the way to the car, I scoffed three Ferrero Rocher chocolates — because that’s what you do at Christmas. My mother and daughter matched me, bite for bite.

It was pure bliss to be all together in this second pandemic festive season, and as I contemplate today’s lunch of a tuna sandwich with low-fat mayonnaise, I know that Sunday’s blow-out was worth every Yuletide calorie. 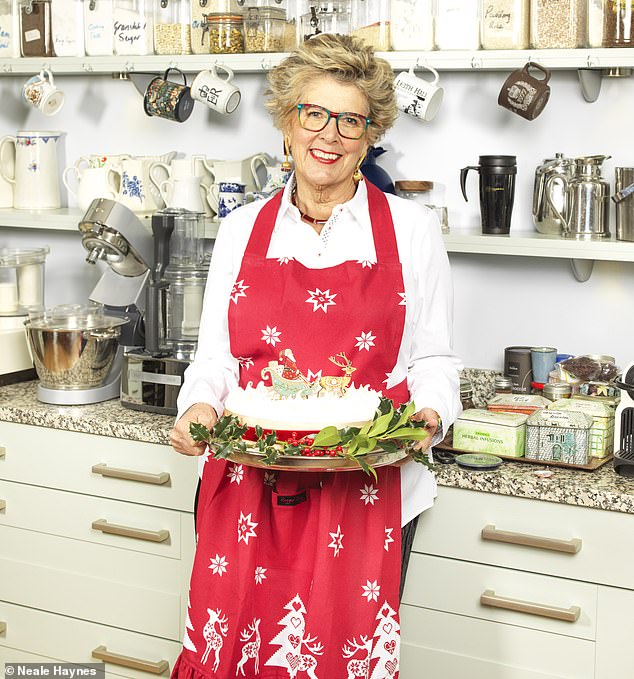 That Dame Prue Leith still uses the phrase ‘worth the calories’ is no surprise to me.

For many years, Prue was consultant cookery director at Good Housekeeping magazine, where I was editor-in-chief. She said it all the time back then, and I’m delighted she still does now.

Yet she has had complaints from eating disorder support groups, who say the word makes some people feel guilty.

Now she may drop her catchphrase. How disappointing.

We all used these words when taste-testing the delicious food featured in the magazine. It’s what professionals say when deciding whether to have a teaspoonful of bread sauce to check the seasoning — or a large dollop on a goose-fat roasted potato.

It’s a handy tool for anyone with a healthy appetite and appreciation of good food.

A calorie-laden feast is a won-derful thing — one of life’s pleasures — but having a rough idea of your calorie consumption, so you can make adjustments elsewhere, is sensible isn’t it?

My 28-year-old daughter, Hope, no doubt influenced by this view, grew up to become a chef at a Michelin-starred restaurant. She learned how professionals eat, with true appreciation of food and occasions.

She is a healthy weight and has a healthy relationship with food — even teaching a patisserie class without feeling the need to hoover up the leftover desserts. It was work, after all, not a party. And she never shies away from using the C-word.

Nearly all the TV cooks, top chefs and food influencers I know are slim. It’s not that they have freakishly fast metabolisms nor, I hope, that they don’t taste the food they prepare. 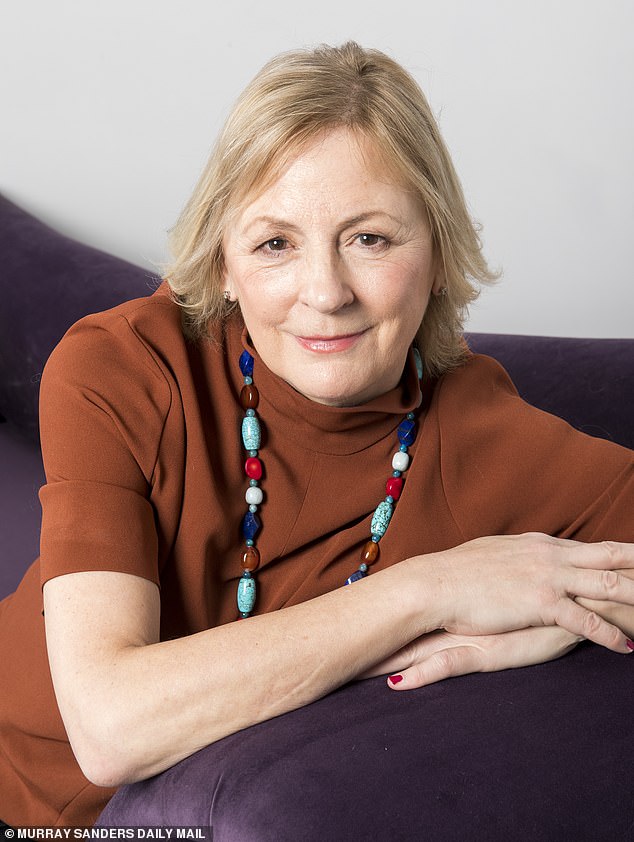 Lindsay Nicholson (pictured) said we seem to have lost all self-control, yet saying this fact out loud is dismissed as either spoilsport behaviour or triggering for people with eating disorders

But how else is a woman of Prue’s age supposed to remain healthy when her job is to taste sugar-laden confections, some of them delicious, some of them — in the early rounds of Bake Off, I imagine — not so much?

What she does is what all professionals do: make a judgment call as to which foods are worth cutting back on others for — and which are not.

Meanwhile, away from the professional kitchens and TV studios, making choices around what you consume has become increasingly chaotic.

I went shopping in my local High Street this morning, which is, of course, lined with coffee shops, all advertising seasonal drinks more fattening than a cooked dinner.

Now, I’m not someone to deny anyone a 400-calorie hot chocolate accompanied by a cake the size of their head. But on a weekday morning? While out shopping for cat litter?

We seem to have lost all self-control, yet saying this plain fact out loud is dismissed as either spoilsport behaviour or — now — triggering for people with eating disorders.

One of the reasons for our lack of control, of course, is that manufacturers have realised there is a tipping point beyond which common sense departs. Combine fat, sugar and salt in the right quantities and both humans — and rats — carry on eating regardless of whether our hunger has been satiated.

Ever wondered why it’s become the fashion to have biscuits on top of cakes and hot drinks that taste like a box of chocolates? The fat/salt/sugar combination means you’ll consume more.

Telling yourself it’s OK to eat something because your taste-buds have been stimulated harks back to a time of simple flavours. A time that no longer exists.

We live in what’s been called an ‘obesogenic’ environment, and our appetites are being hijacked on a daily basis by food manufacturers who employ armies of scientists to increase their profits. One result is an epidemic of type 2 diabetes — currently affecting one in ten people aged over 40 in the UK.

I have nothing but sympathy for people who struggle around food. Bulimia and anorexia are devastating illnesses with high mortality rates. But denying reality is the worst way to deal with such issues. There’s so much talk now about treats being good for our mental health — go on, you deserve it — but getting real about nutrition and understanding that what we put in our bodies matters, that’s real self-care.

There are many ways in which Prue Leith is a wonderful example of older womanhood, but the grandmother has one bad habit that truly makes me wince — her liberal use of the C-word. Calories, that is.

I can totally understand why the eating disorder charity Beat has urged her to drop her catchphrase, ‘it’s worth the calories’.

Obsessing about calories, designating some foods as ‘naughty’ and other outdated mainstays of diet culture can have a pernicious effect that extends far beyond one slice of a technical bake. 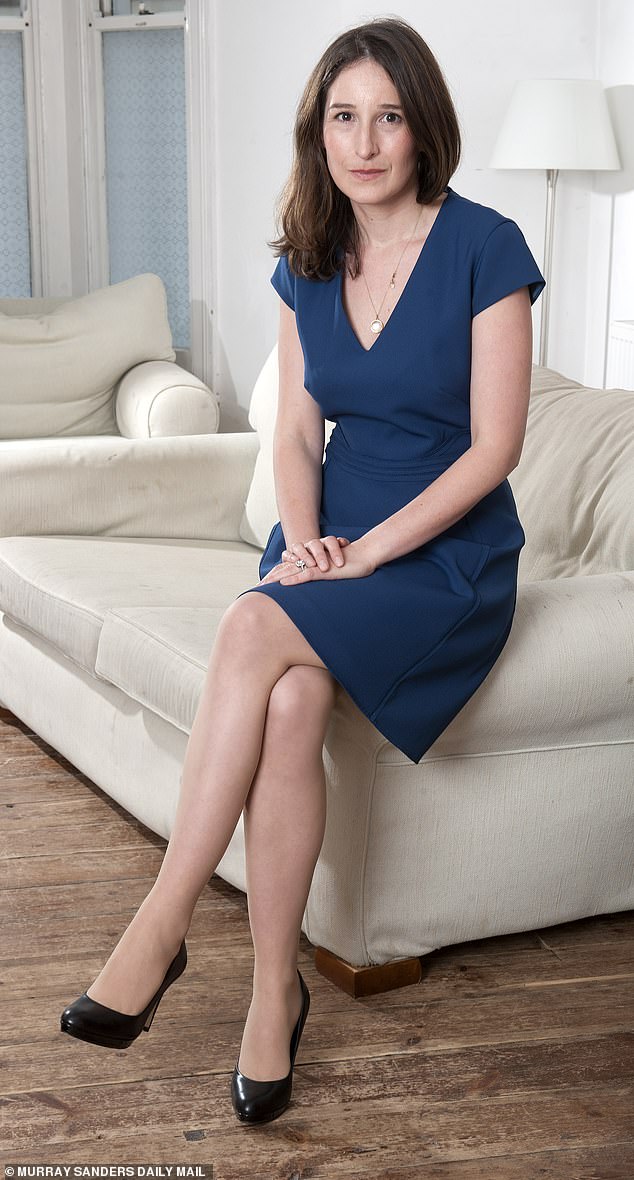 Rebecca Ley (pictured), who developed anorexia as a teenager, said obsessing about calories can have a pernicious effect that extends far beyond one slice of a technical bake

Take it from me. As a teenager in the calorie-obsessed 1990s, when Rosemary Conley entreated women to tackle their thighs into submission and the prevailing body ideal was a surgically enhanced Pamela Anderson in her Baywatch swimsuit, I developed the eating disorder anorexia.

Aged 15, I was treated as an inpatient at a mental health facility more than 100 miles away from my family home in Cornwall.

When I first arrived, very seriously ill, I refused to engage with the programme and was only a day or so away from being moved to hospital and fed through a tube.

At my worst, I was unable to lick postage stamps for fear they would make me ‘fat’.

I was so rigid that I couldn’t imagine a future where I would be able to travel abroad or have a family of my own.

But then, inspired by an older girl at the unit, I started to do what was asked of me.

After initial days of complete bed rest, then months of group and individual therapy, as well as a strict meal plan, I was discharged.

But that’s when the real work of getting better began — a process that took the best part of a decade.

Now, as a 42-year-old happily married mother of three, I still occasionally pinch myself that I’m getting the opportunity to live the life that teenage me wouldn’t have believed possible.

I will never forget how lucky I am to have escaped the bony grip of that vicious disease, which claims the lives of far too many, far too early.

But I will always regret the years I lost — my youth — and the profound impact my illness had on my parents and siblings. So I always keep in mind the two principles that were key to my eventual recovery: never weigh yourself and don’t, ever, count calories. Sorry, Prue.

These beliefs weren’t learned at the treatment centre which undeniably saved my life in the short term, but in the long, hungry years afterwards, when I was ostensibly better but really spent much of my time wondering what I was ‘allowed’ to eat. 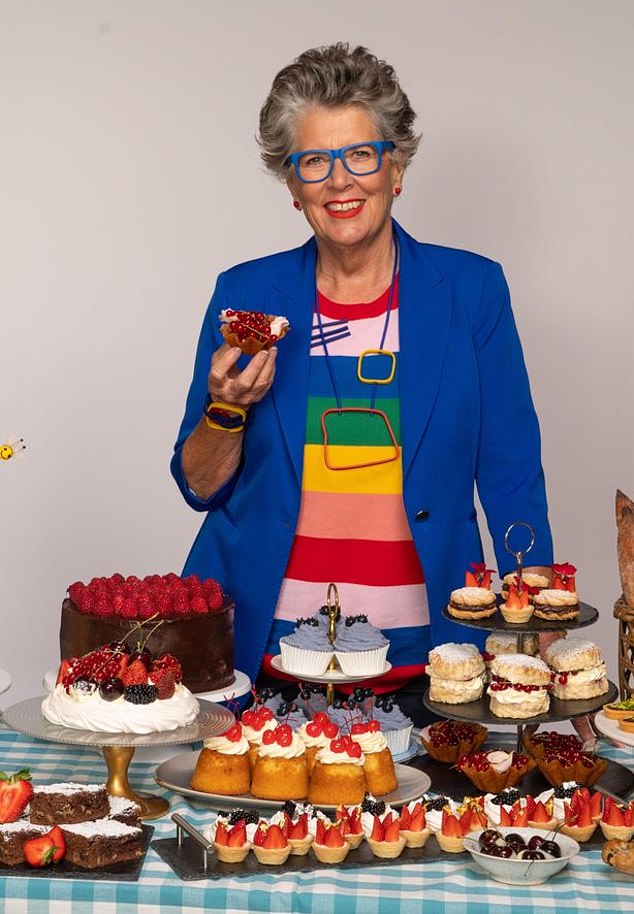 Rebecca said she is sure that Prue Leith (pictured) views her catchphrase as harmless, but how we talk about these things matters

What I discovered in my last year of university, when I was finally ready to learn it, is that your body is actually really good at telling you how much to eat and when — and even what — if you learn to listen to it.

In the 20 years since coming to this understanding, I’ve maintained my weight and learned to enjoy cooking and eating good food. I take how I feel — and how my clothes fit — as my guide.

Now, with three children of my own, I am careful not to talk about calories or what we ‘deserve’ to eat in front of them — attaching morality to food is dangerous.

And I try to appreciate and listen to my imperfect, yet amazing, body (and for this, I find regular yoga really helpful).

I hope that living by my own hard-won wisdom sets a good example, although I know there are no guarantees my children won’t face their own body image struggles.

Eating disorders are highly complex and not caused by any one factor. But I am convinced that the practice of strict calorie-watching is unhelpful for many of us.

Recent science suggests that not all calories are created equal anyway.

Just as the low-fat diktats of the 1990s have been widely discredited, the notion of a straightforward energy-in versus energy-out equation applicable to all people is being revised.

I’m sure that Prue Leith views her catchphrase as harmless, but how we talk about these things matters.

When you reduce food to a quantitative value, it strips it of context and pleasure, which inexorably leads to shame, that most unhelpful and unnecessary of emotions when it comes to our bodies.

The notion of counting calories was far from the only factor that caused me to develop my eating disorder, but learning to break free from that rigid — and unreliable — orthodoxy was a key factor in my eventual freedom from anorexia.

Kim Kardashian Actually WON’T See Pete Davidson For Christmas, Spending It Alone With Her Kids Instead!