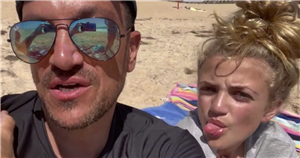 Peter Andre looked like he had a fun time away on holiday with his family in sunny Portugal.

The 48 year old travelled with his wife Emily and children Princess, Junior, Amelia and Theo, and he’s documented the beautiful break on his YouTube channel.

Peter's trip included a boat ride in the sun with his family in tow, and they all gathered together to watch some dolphins.

And on the topic of dolphins, Mysterious Girl star Peter also shared the heartwarming moment he told his daughter Princess she’d be swimming with them.

The family went to a purpose-built park to swim with the dolphins, and Princess, who cried when she found out the news, told her dad: "That was one of the best experiences of my life. I'm so happy. It was amazing."

Peter, who admitted he’s unsure whether his kids will have the Covid vaccine, explained: "The excitement on the kids' faces, unbelievable. Princess can't believe it. Amelia's so excited, she's never seen dolphins apart from the night before.

"It's going to have her dream come true. She's been asking for the last three or four years."

The family stayed at a luxurious villa during their Portugal getaway, with a huge swimming pool surrounded by trees.

He told fans: "I feel very lucky to come out to Portugal because obviously it was on the green list, so people were taking the opportunity to go.

"And it's now been put on the amber list so it's really scuppered people's plans to come out."

Topping up their tans, the famous family also enjoyed time relaxing on sandy beaches and the kids took a dip in the sea.

A chef also visited them at their villa to treat them to a delicious meal.

Peter continued: “I feel terrible for anyone that's booked holidays but obviously incredibly happy that we got the chance to come and now Emily and everyone's coming on board and I'm very excited.”

Peter’s trip comes after the star shared that his daughter Princess has landed a music school scholarship.

The star opened up about the daughter he shares with ex-wife Katie Price during a brand new photoshoot and interview with son Junior for OK!.

When asked how Princess was getting on with her singing, Peter revealed: “She’s worked really hard and now that she’s got a music scholarship at her school for next year she’ll thrive. I’m really proud of her.”

Princess, 13, has been known to share clips of herself singing over the years and it seems as though the youngster has a real talent.