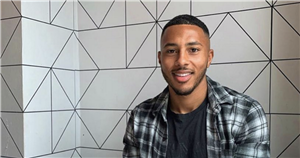 With just two weeks until the final, Love Island has introduced two bombshells from the villa to shake things up a bit.

Included amongst them is footballer Aaron Simpson, who enjoyed a dinner date with Chloe and Mary on Monday evening's episode.

Aaron is 24 years old and football is his profession, with the handsome hunk formerly playing for Kilmarnock.

He's got a range of impressive teams under his belt, having also played for Plymouth, the Wolverhampton Warriors and Sutton United.

Aaron started his professional career in football at the age of 17 but he has been playing for much longer than that.

He said: "I started playing when I was about four or five. I signed my first professional contract when I was 17. I’m 24 so it’s been quite a journey."

Aaron has an impressive following of 17,000 on Instagram – a number set to climb as he appears on the hit ITV2 show.

The Love Island star often shares photos of himself playing football, including a snap where he holds on to a huge trophy, with the caption: "Champions & history maker."

Aaron has spoken about trying to maintain a dating life while juggling his successful football career, and said: "A lot of people have an assumption of me as being a typical player, but I got all of that out of my system when I was younger and now I’m a lot more laid-back when it comes to dating.

"A lot of people would assume that I go on lots of dates but I’m actually quite picky when it comes to who I date."

Although the actual style of his hair is pretty much the same as today (clearly his signature look), his hair is bleached blond – plus his beard is a little fuller nowadays.

So far, Aaron has been trying to get to know Chloe, and he told her during dinner: "Twenty five turning twenty six, maybe passing your prime a little bit?"

Love Island viewers took to Twitter to share their thoughts about Aaron's comment, with one writing: "Did Aaron just tell a 25 year old woman she was 'passing her prime'?"

A second penned: "Aaron saying past 25 is past your prime. THE AUDACITY."

How To Make Your Pajamas Stylish Enough To Wear In Public