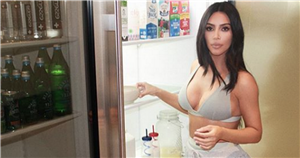 Kim Kardashian caused quite a stir among fans when a video of her giving a tour of her kitchen reappeared on TikTok.

The reality star, 41, sparked a debate about how much food is ethical to hoard in one home, thanks to a Kardashian-dedicated TikTok account sharing a snap of her lavish walk-in fridge and pantries.

Kim took fans on a tour of her pantries and walk-in fridge while also showing off the kitchen “where it all happens”, as she showed off her chef making that night's dinner.

She added: “Guys, I have a walk-in refrigerator where we keep all of our fresh, organic produce. We are building on the property all organic trees to grow our own vegetables and do all of our own stuff.”

She then showed off a very filled up pantry adding that it was placed there because “this is the kitchen that we cook in”.

Kim went on to explain how she has shunned single-use plastic and showed off even more shelves of food – with pre-packaged sauces, bottles of juice and perishable dairy products all on display.

"That’s a whole restaurant grade kitchen," one TikTok user exclaimed underneath the revisited clip filmed in 2020.

Fans were quick to flock to the comment section to show how unimpressed they were with Kim’s extravagant lifestyle.

One said: “Ummm…. So what happens when half of the food spoils? Does it just get thrown out? Or do staff get to take home stuff before it goes bad?”

"i KNOW they ain't going through all that food before it goes bad. i hope she's donating it or something because [shocked face]," another person wrote.

While others were in awe of the two kitchens in the home, writing: “She has a display kitchen, and another kitchen to actually cook in. omg.”

Just when viewers thought it was over, Kim panned into the kitchen that was used for cooking and added: “If you want a little more chaos with tons of oat milk and almond milk you have this refrigerator.”

The star is no stranger to living a luxurious life that suits her taste.

On a recent episode of The Kardashians, mum-of-four Kim showed off herprivate plane that was kitted out in cashmere.

Giving a tour of the plane, she told viewers: “The best, most exciting part of the plane is its all cashmere – ceiling, pillows, headrests.”

She also explained her plans for a “no shoes” rule on the plane, saying she would instead have custom SKIMS pyjamas, socks, blankets and slippers for all her passengers.

For your latest showbiz news, sign up to OK!'s newsletter here.