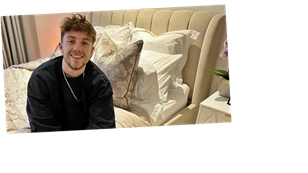 Roman Kemp is a Capital FM DJ who has become a household name through the show, his appearance on I’m A Celebrity… Get Me Out Of Here!, and the close bond he shares with dad Martin Kemp.

He lives in a very stylish London pad which has the star has put his stamp on, and it’s clear statement interiors run in the family, with his parents home also being a super impressive abode.

The 28 year old star has made his home quite the sanctuary away from his busy life, and we’ve had a peek inside…

The star posed for a picture sat on his cosy bed with an impressive beige headboard. To the side we can see a stylish bedside table with a vase of flowers on top.

Roman opted for some Versace dinosaur plates to grace his dinner table.

Roman showed off his huge new television, and looked very pleased with the new addition to his home.

We caught a peek of Roman’s cosy lounge during a Zoom chat with his dad Martin.

Roman snapped videos of his first delivery which included boxes upon boxes of Versace goods.

Roman showed off the cupboard where the ‘cleaning stuff’ lives, posting the shot to 1.3 million Instagram followers.

Roman showed his fans a look at one of his chosen pieces of artwork; a portrait of Frida Kahlo.

Two adorable mugs sit on the shelves. In the background some quirky artwork is visible, as well as Versace labels from the plate delivery.

Roman’s dining area looks like the perfect spot to soak up the city views and skyline.