Immerse yourself in the surrealist nightmare of Edgar Allan Poe

An immersive theatre experience on a scale rarely seen in Australia is coming to Melbourne – but you'll need to sign a waiver before you're allowed to see the show.

A cast of 11 performers is set to recount the life and mind of gothic writer Edgar Allan Poe through music, burlesque, dance and even a few magic tricks. 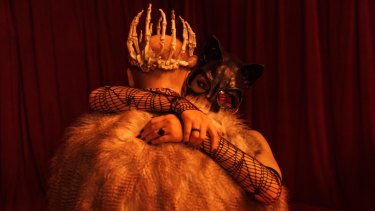 Tucked inside an industrial warehouse in North Melbourne, visitors will have to navigate a maze of 35 or so rooms. The interactive performance runs in 10-hour loops to make each visit as unique as possible.

Creative producer Kirsten Siddle described the theatre show as a "choose your own adventure".

"No two journeys are the same," she said. "If you choose to go right or left, you'll have a different experience to a person who chose a different route. There's lots of uneven floor surfaces and places to crawl and creep and climb. We work in unconventional spaces."

A Midnight Visit has already had a critically acclaimed Sydney run. However, Ms Siddle promised the show will be fresh for Melburnians with plenty of "new tricks and treats". 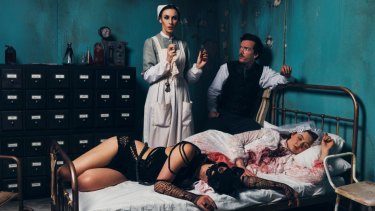 There are over 30 rooms and a raft of costumed characters. Credit:James Brickwood

Ms Harvey said Edgar Allan Poe was an obvious choice when it came to picking a theme for the show given many people would be familiar with the American writer's works ("Quoth the raven, 'Nevermore!' ") but not so familiar with his personal life.

It's as scary as your mind makes it … It's like being in a dream.

"Poe is a person whose life and work are just as mysterious as each other," she said. "He lets you fill in the blanks. So when looking at something that was going to challenge people, his work was a natural fit. He's the granddaddy of gothic and fantasy novels … but you don't need to know anything about him for this.

"If you've ever sat down and watched Stranger Things or something from David Lynch, all of [Poe's] tropes are evident. He's permeated so much of pop culture."

A Midnight Visit opens in Melbourne on Wednesday, August 7. Tickets are available at amidnightvisit.com from Wednesday June 12.