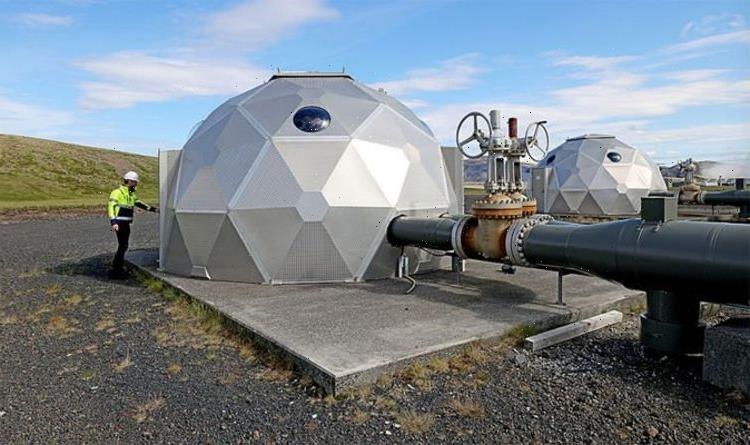 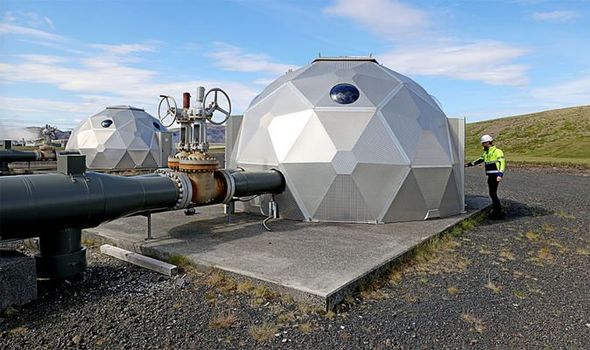 It is one of the first carbon capture and storage systems to show true promise and, according to University of Iceland geochemist Dr Martin Voigt, the potential is vast and global.

Martin, 34, works with the company Carbfix, which has already pumped 70,000 tons of CO2 into Iceland’s volcanic rocks since 2014.

The gas, which is dissolved in water, reacts with natural minerals to form tough calcite, locking it underground for ever. Carbfix’s estimate of the potential is staggering. It says: “The global storage potential is greater than the emissions of the burning of all fossil fuels on Earth.

To put that in context, global CO2 emissions last year were about 34 billion tons.

We saw the CO2 stored in a sample of the grey volcanic rock – basalt – whose pores had become speckled with white calcite.

Virtually the whole of Iceland is volcanic rock – and so far Carbfix has exploited just 0.01 percent of the potential storage space.

The firm now wants to increase operations from 12,000 tons of CO2 a year to three million. From 2025, it plans to capture CO2 at overseas factories, take it to Iceland in liquid form on renewable energy-powered ships, then petrify it in the lunarlike landscape near Keflavik airport.

Martin, originally from Stuttgart, Germany, said: “This won’t be the only solution to climate change. We will need a lot of solutions and Carbfix is one of them. We still need to reduce emissions altogether.

“But for a lot of businesses it is cheaper and more efficient to capture CO2 and store it underground safely.

“If you look at how much basalt we have in Iceland, that could easily store all the greenhouse gas emissions targeted by the Paris Climate Agreement. But basalt occurs all over the world. Virtually all the ocean floor is basalt and what Carbfix needs to work is CO2, basalt and water. I researched into this and found you can use seawater for the Carbfix process.”

The cost works out at about £18 a ton of CO2 compared with £44 a ton under carbon trading schemes, where firms basically pay a tax on the greenhouse gas. Martin said: “It’s a win-win.

Firms save money and they do not emit the greenhouse gas.”

The system began at Hellisheidi, one of the largest geothermal power stations in the world.

It tapped into super-hot water from deep beneath an island where earthquake tremors are routine and the Fagradalsfjall volcano is currently spewing out lava near the international airport.

A lot of CO2 and hydrogen sulphide – the gas that smells like bad eggs – is held in the scalding water from deep below Earth. Carbfix removes both in a 42ft scrubbing tower – rather like a giant soda machine – helping the power company avoid pollution taxes.

Martin explained: “It dissolves the gases in the water and purifies it. It’s a bit like making sparkling water.”

The water then flows down a pipeline to the giant golf balls, which cover injection wells whose boreholes go 1.24 miles down into the basalt. Gravity then takes over and the water is released about 800 yards down.

Martin said: “The CO2 in the water reacts very quickly with the basalt. It is slightly acidic and dissolves elements in the basalt such as calcium, magnesium and iron and forms a carbonate mineral, calcite, which keeps the CO2 in its structure.

“The gas becomes solid and is permanently and safely stored in rock form.

“The process starts within days. After three months 60 percent of the CO2 is mineralised.”

Other methods of carbon capture and storage being explored by companies include pumping CO2 into old North Sea oil and gas fields.

But Martin said: “In the North Sea schemes you have pure CO2 compressed into a liquid and injected into these old oil reservoirs.

“But pure CO2 is less dense than seawater so a cap has to be built to prevent leaks.

“At Carbfix, the CO2 dissolved in water is more dense than the surrounding water underground so there is no worry about it coming back up. It makes it much safer.”

THE Achilles’ heel of renewable energy is widely held to be its variable nature. It’s driven by weather, after all, which means it’s not energy on demand (which we almost fetishise over). So we can only take what comes.

It’s an issue we can overcome, using a mix of technologies – wind, sun and tidal; load management, storage and some strategic oversizing of the renewable fleet, and then using times of overproduction to make hydrogen to augment green gas on the grid. That is essentially the “smart grid”.

But there’s a new kid on the block – new for Britain at any rate, but long established in other countries, such as Iceland. Unique geology there helps, but tapping the heat from deep underground is a constant source of renewable energy – geothermal is its name.

Power stations that run a “base load” – imagine a straight horizontal line on a graph – are eulogised by supporters of fossil and nuclear fuels.

Geothermal is exactly that, with none of the pollution downsides.

Until now it’s not been possible in Britain, but the first of a new generation of geothermal projects should get underway next year in Cornwall. There’s potential for more in the same region – and the only thing preventing schemes in other regions is the cost of drilling, which continues to fall.

I see geothermal as part of our national energy mix and part of how we get to 100 per cent renewable energy.

It will be part of Ecotricity’s energy mix as soon as the first project is operational.

In a spooky twist of fate, the hot water deep under Cornwall has been found to be rich in lithium – a key ingredient of electric car batteries that often gets talked up as a problem.

Deep under our feet we can find not just a constant source of clean renewable energy but also a source of lithium. Two birds under one stone.

Longer term, the really exciting prospect for me is to drill for geothermal on the site of closed fossil power stations. They have all the infrastructure required, such as grid connections and huge generator buildings.

We could repurpose them, replacing fossil fuels as the power source with geothermal, once the cost of drilling allows for that.

This opens up the possibility for geothermal to play a major role in the grid of the future – and rather neatly, to do so by re-using infrastructure of the soon-to-be past.