‘I have no intention’ of sacking ABC chair Ita Buttrose, says Communications Minister

Ms Buttrose is expected to staunchly defend the broadcaster when she responds on Monday to Mr Fletcher's complaint letter, in which he demanded the board explain how the episode was in the public interest and complied with standards of accurate and impartial journalism.

Mr Fletcher said he would wait to see Ms Buttrose's response before deciding whether to make it public, but said he had confidence in her position as ABC chair. 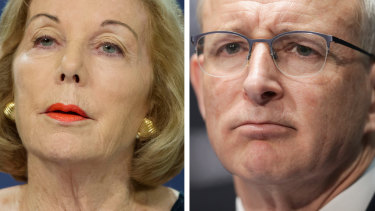 ABC chair Ita Buttrose is preparing to respond to Mr Fletcher’s letter requesting the ABC justify how the Four Corner’s episode “Inside the Canberra Bubble” was in the public interest.Credit:SMH

"I certainly have no intention of sacking the chair of the ABC. She does an important job," Mr Fletcher told ABC TV's Insiders on Sunday.

"Ita Buttrose is a very experienced media figure and I do have confidence in the way that she is operating in her role. She is one of the most eminent media figures in Australia and she has a challenging and very important job."

Sources inside the ABC, who were not authorised to speak publicly, said Ms Buttrose was overseeing the board's response which would contest each of the 15 questions posed by Mr Fletcher in his letter.

"It will be a very strong defence. The whole board is locked in behind Ita," one insider said.

The Four Corner's episode "Inside the Canberra Bubble", which aired on November 9, exposed an extramarital affair between Population Minister Alan Tudge and his then-media adviser Rachelle Miller in 2017. It also alleged Attorney-General Christian Porter had been witnessed "cuddling and kissing" a female Liberal staffer at Public Bar in Canberra, which he has denied.

The episode infuriated members of the Coalition, prompting Mr Fletcher to write to Ms Buttrose on December 1 demanding a response within 14 days to a series of questions including: "Why, in the judgment of the Board, are the personal lives of politicians newsworthy?"

Mr Fletcher made his letter public by posting it to Twitter, prompting criticism that it was an attempt to undermine the independence of the ABC.

He defended his letter as "entirely appropriate", saying it was his responsibility as minister to ensure the ABC complied with its statutory obligations to produce objective journalism.

"I'm the minister charged with overseeing the ABC. It's very clear they have editorial independence, but this is an entirely appropriate question for me to be asking," Mr Fletcher said on Sunday.

Gardening UK: Sprucing up your garden can add value to your home – experts explain how
Entertainment