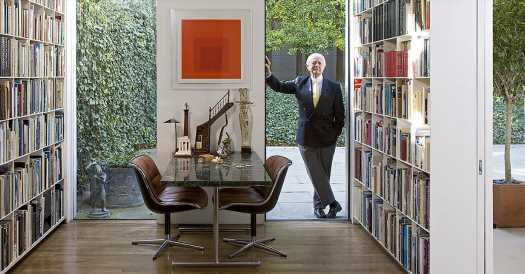 Hugh Newell Jacobsen, a Modernist architect who brought sophisticated designs to homes, most notably one belonging to Jacqueline Kennedy Onassis on Martha’s Vineyard, as well as museums, universities and public buildings like the U.S. Capitol, died on March 4 in an assisted living facility in Front Royal, Va. He was 91.

His death was confirmed by his son Simon, a partner with his father in the Jacobsen Architecture firm in Washington.

“Like a lady,” Hugh Newell Jacobsen once said, “the best house is polite to her neighbors and never shouts.”

If his houses did not shout, they garnered broad attention for their modern look mixed with nods to the past and appreciation for the regions where they were built.

His residences had signature touches like 45-degree pitched roofs, clean lines, minimal ornamentation, masterful use of lighting and windows, and décor that included his own furniture and fabric designs — a body of work that earned him many awards, including induction into Architectural Digest’s AD100 Hall of Fame in 2017.

“He took the modernist vocabulary and gave it an elegant refinement that was almost unrivaled,” the architect Robert A.M. Stern, a former dean of the Yale School of Architecture, said in an interview. “House upon house bore the Hugh Jacobsen stamp.”

A Jacobsen house came with Mr. Jacobsen’s outsize personality and style. He was blunt, confident, patrician and witty, wore exquisite clothing and had a dominant sweep of hair. Simon Jacobsen said that his father was mistaken at times for the writer Tom Wolfe. 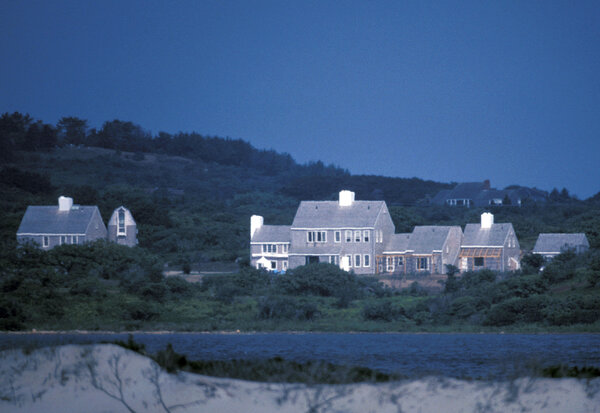 The owner of a house that Mr. Jacobsen designed on the coast of Maine told Architectural Digest in 2009: “When we first met Hugh, there was an hour of chitchat and then the brass tacks. He said, ‘My houses are expensive to build, my fees are outrageous, and I’m a prima donna.’ He was always candid with us.”

Mr. Jacobsen’s scope was international, but he was probably best known for his prolific projects in the Georgetown neighborhood of Washington, where he lived and had his office. Starting in the early 1960s, he worked on more than 120 houses — a mixture of new construction, renovations (including the partially detached townhouse where he lived, which he had originally designed for someone else) and additions that emphasized space and light.

In Washington, he was also known for working on two Smithsonian museums: He did the preservation design of the Arts and Industries Building and the interior restoration of the Renwick Gallery. He also designed the west terrace addition of the Capitol and the Moscow residence of the United States ambassador to Russia.

Mr. Jacobsen was an unabashed fan of Washington, where he first lived as a teenager during World War II when his father, John, was an official of the War Shipping Administration.

“This city has wonderful colonnaded spaces that no one ever gets to see,” he told The New York Times in 1984. “The elegance of the Postmaster General’s office is cheering, just plain cheering. Washington is filled with this kind of stuff. When you look at a city, it’s like reading the hopes, aspirations and pride of everyone who built it.”

Mr. Jacobsen was born on March 11, 1929, in Grand Rapids, Mich. His father was a meat importer; his mother, Lucy (Newell) Jacobsen, was a homemaker.

“I always could draw, rather well, and painting I really loved to do,” Mr. Jacobsen told his son John in an interview in 2010 for “The Artist Toolbox,” a public television series.

After graduating from the University of Maryland in 1951 with a bachelor’s degree in fine arts, he hoped to become a painter. But his father steered him toward architecture, reasoning that it combined art and business. Mr. Jacobsen agreed and earned a certificate from the Architectural Association School of Architecture in London in 1954 and a master’s degree from Yale University, where he studied under the influential Louis Kahn, a year later.

He was hired after graduation by another architectural giant, Philip Johnson. But Mr. Jacobsen was fired after a year because he flopped as a draftsman. After serving in the Air Force, he tried working at several other firms, but they also asked him to leave.

“Imagine, after working with Kahn and Johnson, going to big city design houses in Washington, D.C., and doing public housing and department stores?” Simon Jacobsen said by phone. “He had his own ideas about how things should be done.”

Mr. Jacobsen applied those ideas to his own firm, which he opened in 1958, with help from his father.

In time, Mr. Jacobsen forged a Modernist style that appealed to wealthy and celebrated clients, like Ms. Onassis and her close friend, the heiress and arts patron Rachel (Bunny) Mellon, the actors Meryl Streep and James Garner, and Carole and Gordon Segal, the founders of Crate & Barrel.

Mr. Jacobsen had worked on several projects for Mrs. Mellon, enough experience for her to recommend him to Mrs. Onassis after she bought on Martha’s Vineyard in 1979.

Mr. Jacobsen said that Mrs. Onassis wanted a modern design for a main house — and a guesthouse — that evoked the look of a 19th-century Nantucket home. But it had to be reviewed by local planning officials who were wary of architecture that veered from the look of the island’s surrounding cottages.

(The estate of Mrs. Onassis sold most of the property’s land last year for $27 million to two local conservation agencies.)

Mr. Jacobsen’s credits also include restoration of the Hotel de Talleyrand in Paris and design of the expansion of the Fred Jones Jr. Museum of Art at the University of Oklahoma. That expansion includes nine identical pavilions with pyramidal roofs set in a square and linked by glazed corridors. A tenth pavilion, which extends from the square, houses the main entrance.

Natural light — which enters the Jones museum’s wing through skylights, large windows and glass corridors — was a fixation for Mr. Jacobsen.

“To most people who know the work, it may appear that buildings just have a great deal of glass,” he said in an interview primarily about his residential designs with The Georgetowner, a biweekly newspaper, in 2012. “Although this is key, it is only a fourth of the issue. We bring light inside, then it is prismed on reflective plains of the interior.”

In addition to his sons Simon and John, Mr. Jacobsen is survived by another son, Matthew, and eight grandchildren. His wife, Ruth (Kearney) Jacobson, who was known as Robin, died in 2010.

The Jones museum was one of several buildings that Mr. Jacobsen designed on college campuses. Another was the alumni center at the University of Michigan, in Ann Arbor, which impressed Mr. Stern when he visited the school.

“I sent him a note saying that this is the only building I’ve seen at Michigan that looks like the architect actually visited the site before designing it,” Mr. Stern said. “I was told by Hugh that he posted the letter in the bathroom, in the loo, in his office, so everyone could read it.”

How to remove weeds from grass lawn: Tips to restore garden