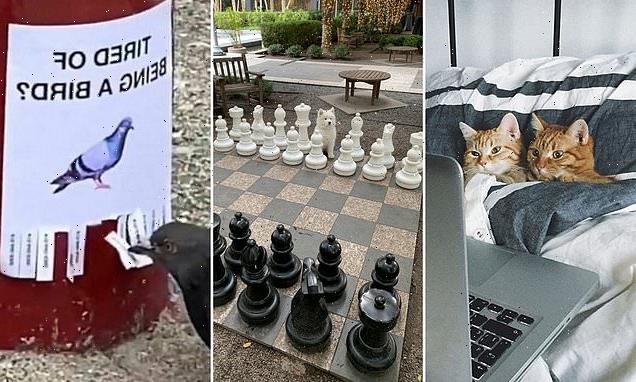 Some people say they know animals who seem just like humans – and these snaps certainly prove them right!

The hilarious photographs, of animals from around the world, were collated into a gallery by Bored Panda.

Among them is a pooch who seems desperate to play a game of chess, and is waiting patiently among the pieces on a giant board.

Another picture shows an adorable pair of kittens snuggled up in bed as they watch television. 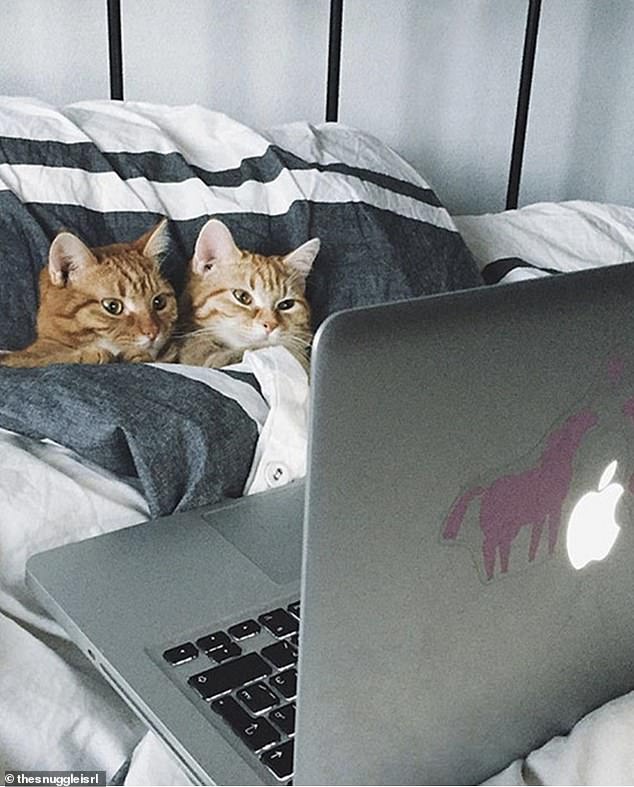 Netflix and cat chill! A cosy evening in: these two kittens look absolutely adorable tucked into their cosy bed, as they watch something on the screen 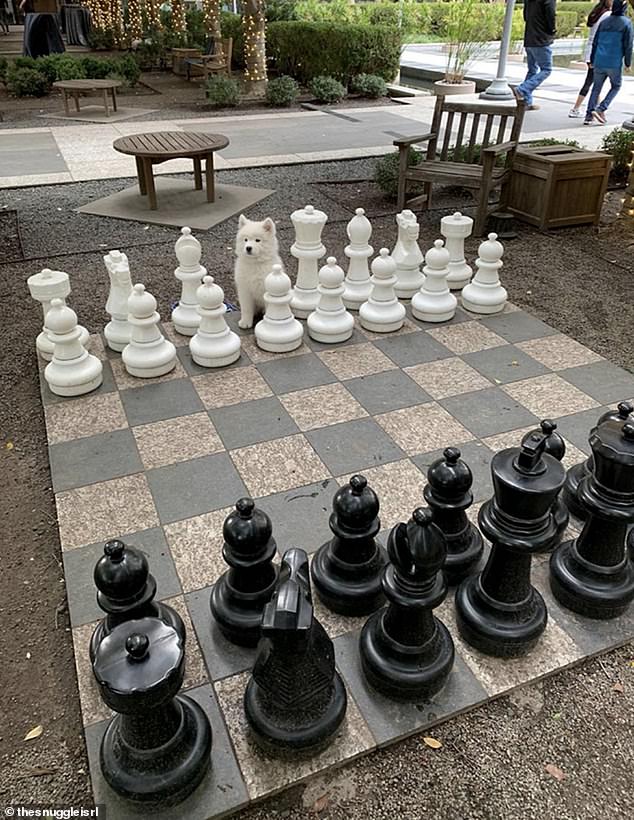 Wanna play? This pooch from the US seems keen to get in on some human action, and enjoy a game of chess 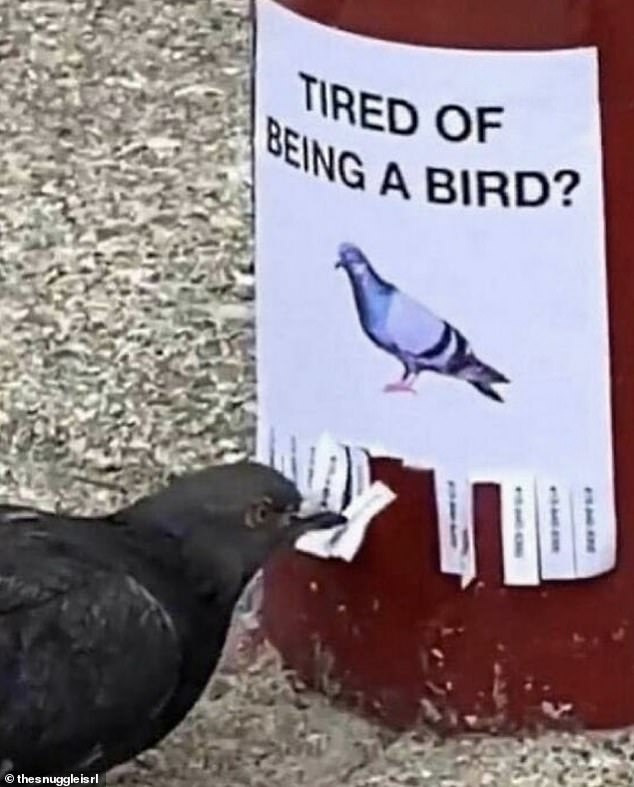 Coo do you think you are? Apparently this pigeon in Atlanta is tired of being a bird – and he seems ready to take action, taking a phone number from this poster 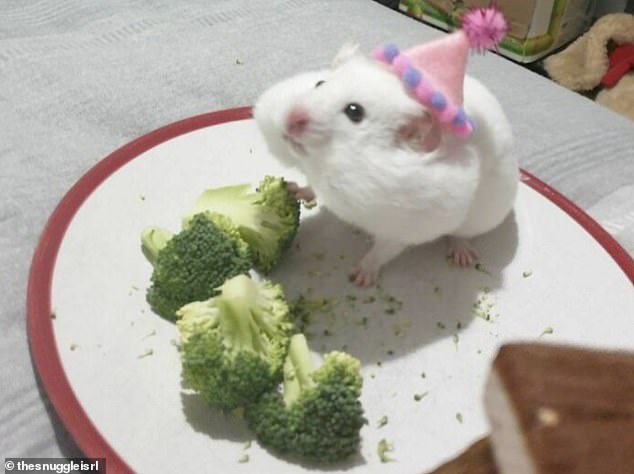 Fill your cheeks! A British owner shared a sweet picture of her hamster Biscuit enjoying a birthday party, complete with broccoli florets and a party hat 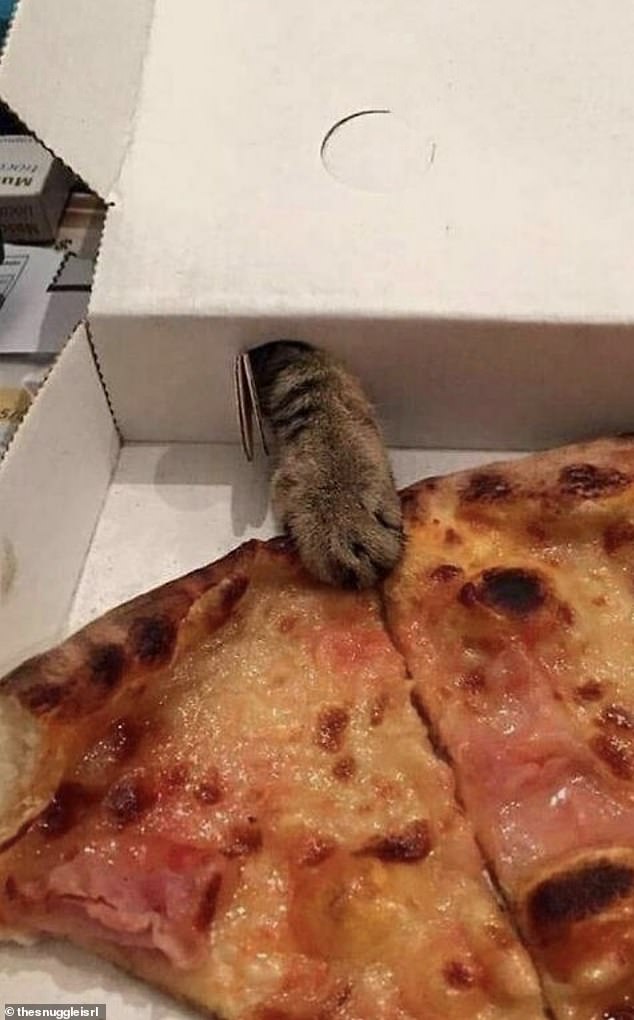 Having a slice! This cat seems to prefer the people’s food to his own, trying to sneak a slice of pizza, instead of opting for kibble 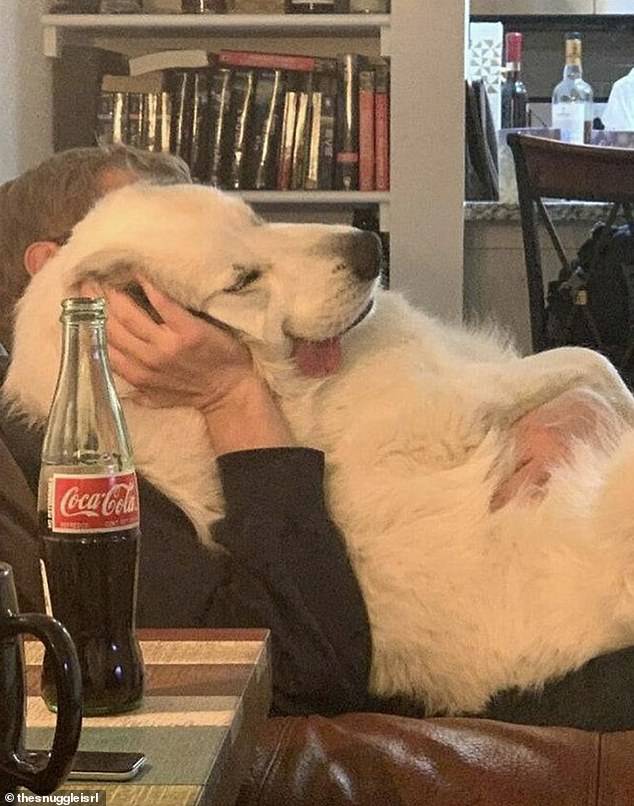 This pooch is living his best life, sitting in the human’s chair while relaxing, and taking a load of at the end of a long day 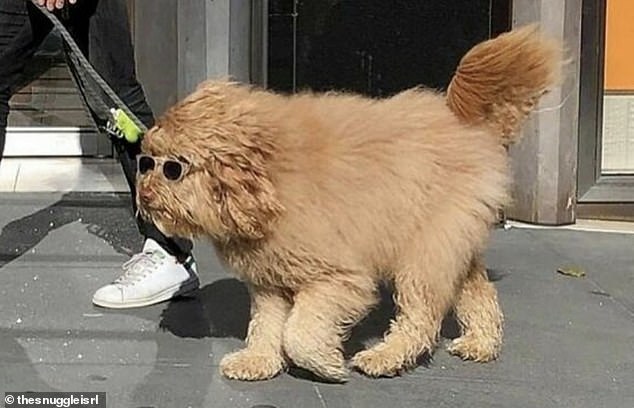 Too cool: whether it’s to protect his eyes from the glare of the sun, or to stay incognito, this dog is rocking shades, just like a human 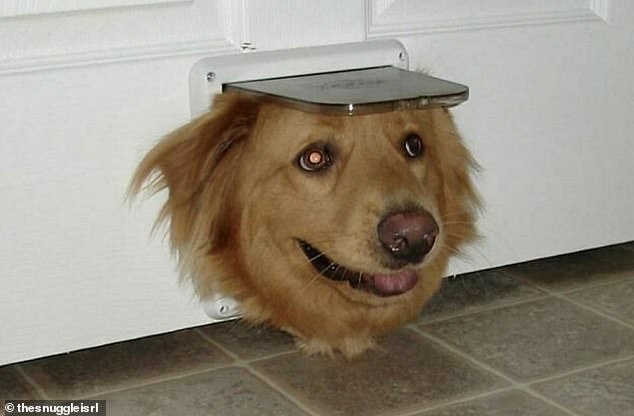 Ok, so this pooch doesn’t think he’s a human, but he certainly seems to think he’s a moggie, trying to squeeze through the cat flap (which is far too small for him) 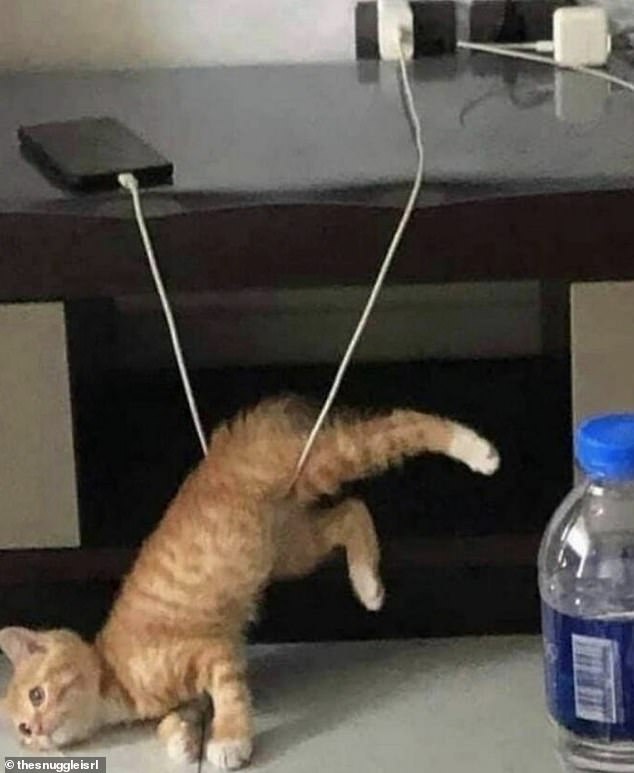 Being human, and having all the access to technology that comes along with it, isn’t all it’s cracked up to be, as this kitten learnt while trying to mess with some cables 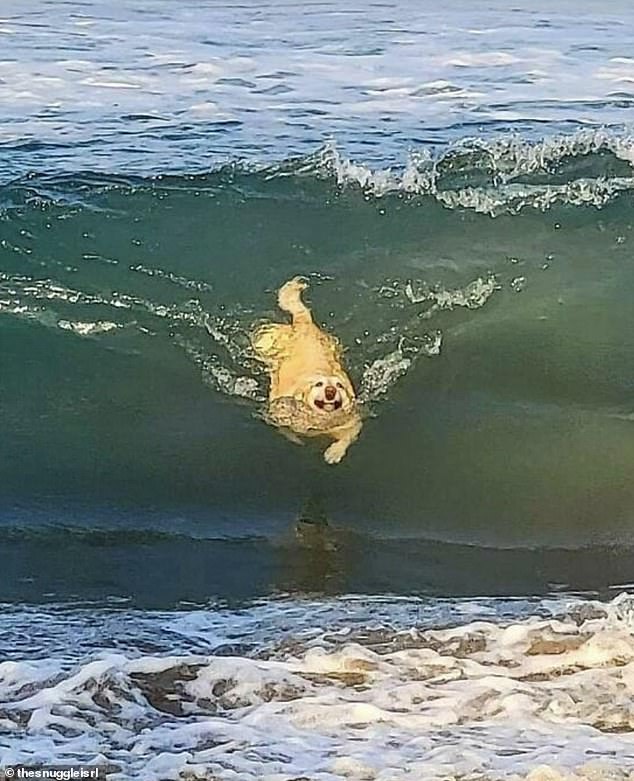 Surf’s pup! Just like most people, this mutt seems to be enjoying his trip to the beach in Brazil, even taking a refreshing dip in the sea to cool off 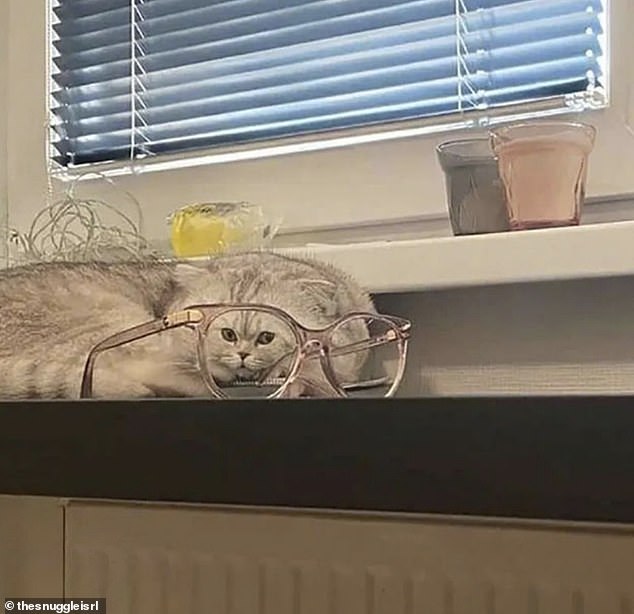 This mog has nailed the stern ‘peering over the glasses’ look. Perhaps she wanted to give someone an angry look – or maybe she just thought they would help her read… 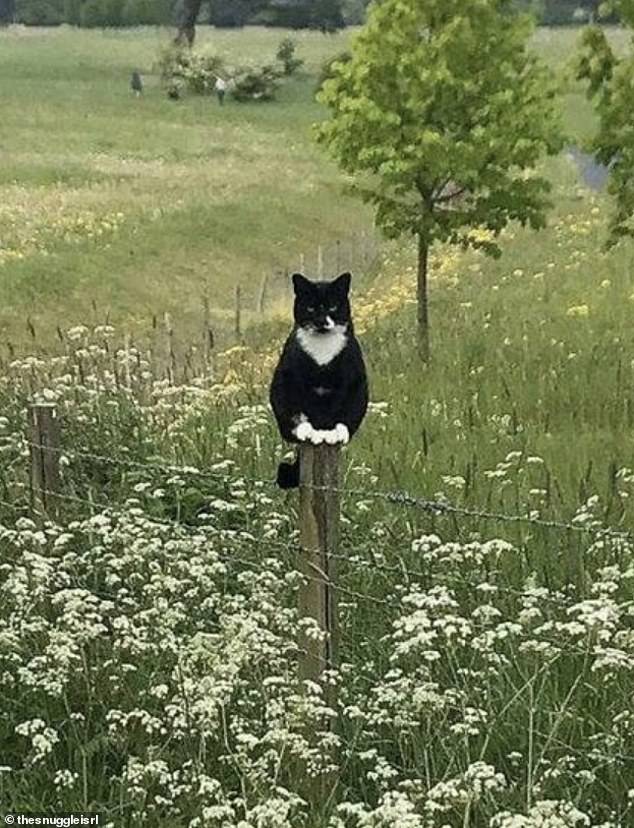 As this feline proves, it’s not just people that get territorial about their land in Ohio! Sitting on a very uncomfortable looking pole, the cat seems to be keeping an eye out to make sure that nobody trespasses

I was on an Aer Lingus flight that was running out on fuel, I thought we were going to die, Irish holidaymaker reveals | The Sun

What color you see at the center of optical illusion reveals what type of genius you are – so what personality are you? | The Sun
Entertainment