A troubled Chihuahua in need of a home is winning the hearts of people across the internet after a hilarious, and brutally honest, post written by the woman fostering him went viral.

“OK, I’ve tried,” begins a lengthy Facebook post by Tyfanee Fortuna, who is fostering Prancer for Second Chance Pet Adoption League in New Jersey. “I’ve tried for the last several months to post this dog for adoption and make him sound…palatable. The problem is, he’s just not. There’s not a very big market for neurotic, man hating, animal hating, children hating dogs that look like gremlins.”

Prancer, she wrote, embodies the “Chihuahua meme” that describes the dogs as “50% hate and 50% tremble.”

“Every day we live in the grips of the demonic Chihuahua hellscape he has created in our home,” the post states.

It’s not Prancer’s fault that he is how he is.

“Prancer came to me obese, wearing a cashmere sweater, with a bacon egg n cheese stuffed in his crate with him,” the post states, going on to explain that his former owner was a woman who “treated him like a human and never socialized him.”

Poor Prancer spent his first few days in his foster home fearful and quiet, but ultimately that gave way to a different kind of personality.

“I was excited to see him come out of his shell and become a real dog,” Fortuna wrote. I am convinced at this point he is not a real dog, but more like a vessel for a traumatized Victorian child that now haunts our home.” 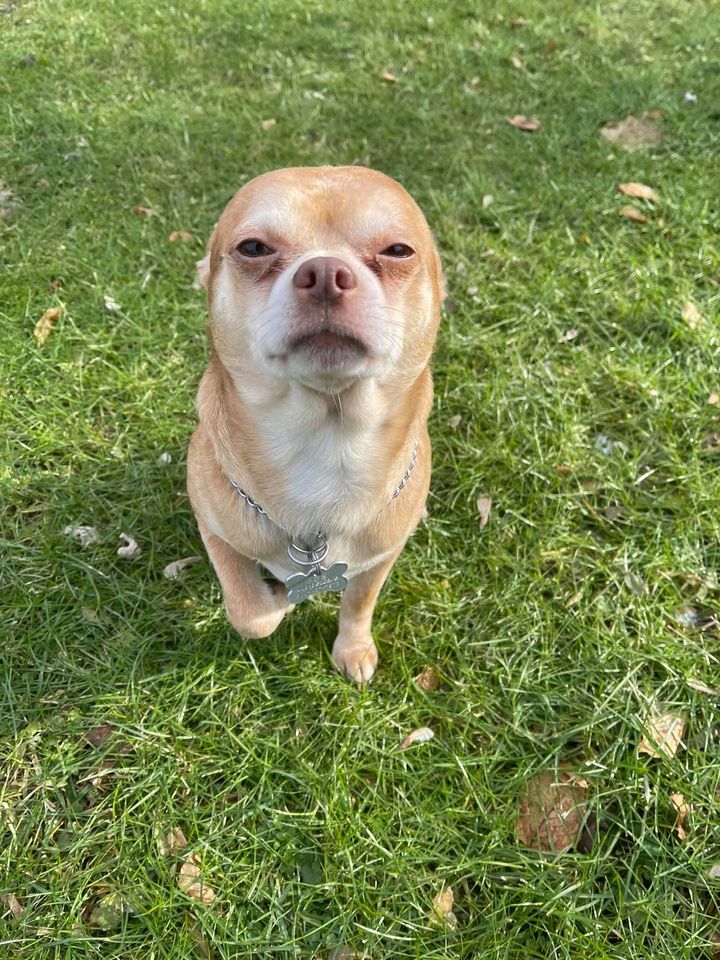 That said, Prancer does have some good qualities. He is “loyal beyond belief,” housebroken, knows some commands and loves to be with the person he’s bonded with ― though that person will have to be a woman or women. (The post warns, “If you have a husband don’t bother applying, unless you hate him.”)

She concluded by imploring those who have “always wanted your own haunted Victorian child in the body of a small dog that hates men and children” to email the rescue.

Fortuna’s Pulitzer-worthy writeup has sparked a lot of interest in Prancer.

“We are getting a lot of inquires from all over the country but focused on finding him the exact right situation to set him up for success,” a Second Chance Pet Adoption League representative named Stephanie told HuffPost in an email.

Only adopters who live within a couple of hours of New Jersey will be considered because “we need the adopter to be able to meet him in person, maybe a couple of times to bond with him and make sure we are able to help support his adjustment.”

Stephanie echoed the good and more challenging components of Prancer’s personality described in the post.

“One on one with his chosen ladies he’s an amazing companion, in the wrong situation he’s a demon lol,” she wrote.

The rescue group also noted on Facebook that while all the attention right now is going to Prancer, there are “MANY other small ‘quirky’ dogs” available for adoption on its Petfinder page.

In the meantime, people on Twitter are drooling over Prancer and his unique disposition.

Incidentally, another dog in Fortuna’s life made viral news in 2017. That canine was Rumpelstilskin, a long-legged chihuahua who had to take drastic measures after his owner died.

“Bonus info: his owner was dead for a considerable time before anyone noticed and he did eat his human to stay alive. +1 for being a survivalist pupper,” Fortuna wrote on Facebook at the time.

She also astutely noted that his “weirdly long” bow legs made the dog “look like a fancy table.”