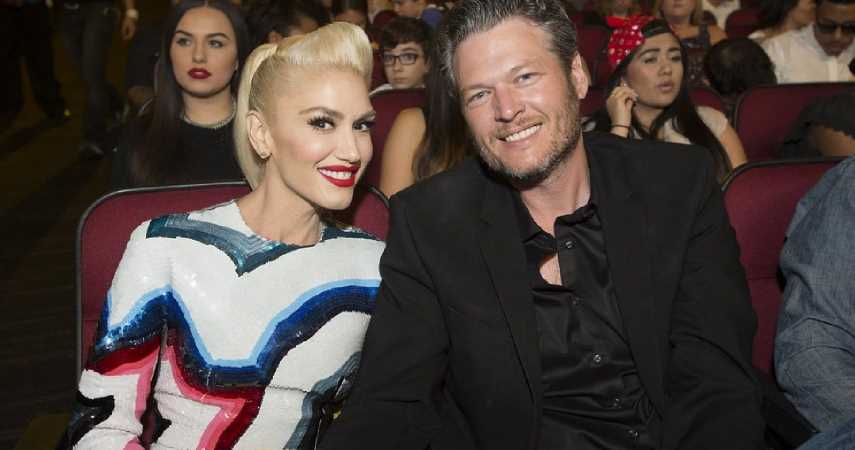 After a six-year long engagement, Blake Shelton and Gwen Stefani have officially tied the knot. The long-time couple said ‘I do’ over the 4th of July weekend with a an elaborate ceremony held at Shelton’s Oklahoma ranch.

Both Blake and Gwen have shared images from the big day on social media. One image that Gwen shared showed the pop star driving off in a gold cart adorned with white bows with her groom at her side. Another shows the couple exchanging a kiss in front of an elaborate 5-tier wedding cake, while others show Blake and Gwen in each other’s arms on the dance floor.

In several photos, the singer’s choice of footwear could be seen – a glitzy pair of white La Silla cowboy boots. The boots was specially monogrammed with Swarvoski crystals to feature Blake and Gwen’s initials. Gwen accessorized the rest of her look with gold bangles, chunky earrings, and a silver, cross necklace.

Blake’s look was a bit more casual than his new wife’s choices. The country star paired a back tuxedo jacket with a white shirt, black vest, and a pair of blue jeans. He added a light-colored bow tie to finish the look.

As of now, few details have emerged about the wedding ceremony or reception. It’s unclear how many guests attended the event and what famous faces attended the nuptials. But the couple’s long-time friend Carson Daly reportedly officiated the ceremony, Us Weekly notes.

Later in the evening, Gwen changed into a second dress for her reception. The mother-of-three chose a strapless, white mini dress complete with a tulle skirt featuring crystal and sequin embroidering. Designer Vera Wang later shared details of the custom dress on social media, explaining it was created from “hand pieced silk.”

The designer revealed that Gwen also had three birds embroidered into the dress to symbolize her three sons, Kingston, 15, Zuma, 12, and Apollo, 7, whom she shares with her ex-husband Gavin Rossdale. She even had her own name alongside Blake’s and her sons’ names sewn into her veil, as well.

Blake and Gwen originally met on the set of The Voice in which they were both acting as judges in 2015. The pair officially became engaged in October 2020 after years of speculation. According to Good Housekeeping, Gwen’s custom engagement ring was designed by Kate Zimmerman. It features 8 to 10 carats and is valued at upwards of $700,000-$800,000.

Congratulations to Blake and Gwen!

When do schools break up for summer?

Can You Eat Corn if You’re on the Keto Diet?
Entertainment