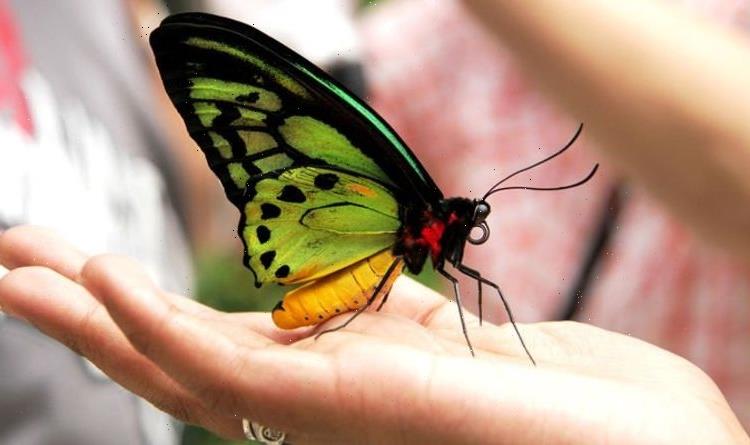 Green Britain: British experts in race against time to save world’s biggest butterfly

Chris Packham reveals which is the largest butterfly in the world

The first state-of-the-art nursery to breed the gigantic butterflies has been built by British experts and a breeding programme will begin within weeks. But such is its rarity, the biggest threat to its survival is poaching, so the facility will be under constant guard. The birdwing butterfly – which lives for just three months – has become increasingly threatened in recent years due to a global smuggling trade over the so-called dark web, despite being protected by the Convention on International Trade in Endangered Species (CITES).

Unscrupulous collectors pay huge sums for pristine specimens, killed soon after they emerge from their pupa stage so their huge wings are perfect.

Apart from man, the insect has only two predators – birds, which eat the caterpillars, and spiders. But without the programme, experts say it will be wiped out within
20 years.

Incredibly, the drive to save it is being led by two British businessmen, who describe themselves as “amateur entomologists”, after they realised its plight.

Henry Barlow, one of those behind the programme, is among only a handful of experts to have seen the butterfly in the wild in the south east of Papua New Guinea (PNG). Originally from Northamptonshire before moving to Malaysia, Henry said: “This is the largest butterfly in the world – would you really want to see it go extinct? I think that’s almost certainly going to be the case within the next 20 years unless we can get this as a sustained and on-going project.

“The wingspan of the female is 30cm (11.8 inches) and it’s around the size of a blackbird but extremely rare. I am fortunate enough to have seen it three years ago when I went up to a remote plateau – one of two places in Papua New Guinea where there is a population – and saw two live adults close up and flying above the treetops. 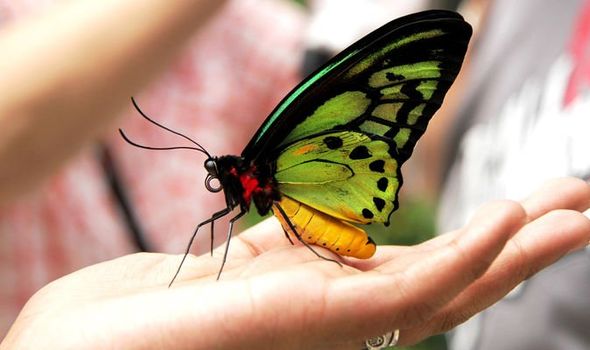 “It’s like watching a bird fly overhead. When you think the wingspan is several times that of many of our smaller birds you get some idea it’s a pretty dramatic sight soaring above the forest canopy.”

While the female is huge, but coloured in muted creams and browns, the male of the species is about half that size and has iridescent blue and green wings.

The first specimen was caught 115 years ago in Papua New Guinea by British naturalist Albert Meek – disturbingly using a shotgun filled with sand. It remains in the Natural History Museum’s London archives, its wings still peppered with holes.

A budding entomologist since childhood, Henry, chairman of a farming company, discovered the butterfly’s habitat had once been on previously cleared land acquired by his firm in the Seventies. He said: “This had greatly diminished the habitat for this species. I took the view that as an amateur entomologist I had better do something.”

Despite serious access and logistical problems, a laboratory was built and equipped on the north coast of Papua New Guinea, with everything being brought in by sea or air. The project has been funded by the sustainable palm oil company Sime Darby Plantation. 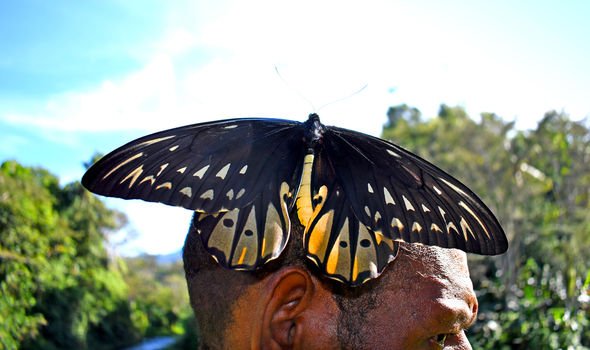 In the past two years they have trialled a successful breeding programme for another closely-related butterfly, the Ornithoptera Priamus, also known as the Common Birdwing, which is not under threat. Henry explained: “We are now at the stage where we are about to take steps to bring in a small number of Queen Alexandra’s birdwing butterflies and see if we can get them to also breed in enclosed conditions. It is an incredibly exciting development and it brings hope for this magnificent butterfly.”

Queen Alexandra’s Birdwing Butterfly Project Manager Ian Orrell said that, given their extremely high value on the black market, the nursery will be placed under dedicated 24-hour security. Commercial dealers are believed to target severely endangered species, stashing away specimens and betting that extinction will cause their value to skyrocket.

It’s possible to discover specimens being traded on the internet, even though one recent listing attracted the posting: “I never thought I’d see one of these for sale so obviously… but somebody evidently doesn’t care about CITES!”

Ian, originally from Wigan but who now works in Papua New Guinea, said: “Nowadays we have a very strict no deforestation policy in place and we are committed to preserving and enhancing areas of high conservation value. 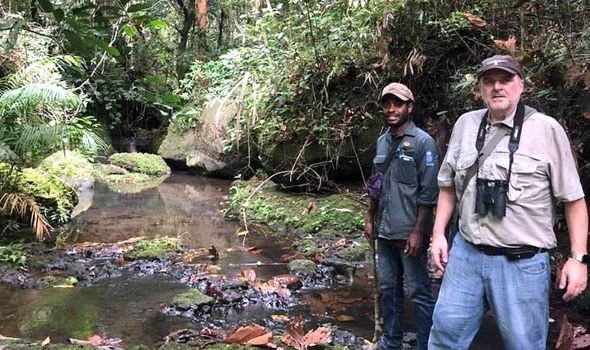 “This means our contribution to PNG’s desperately-needed rural economic development is also balanced with the need to protect and preserve natural habitats and the species that depend on these.

“However, PNG’s forests are under threat from large-scale developments that are associated with forest destruction.

“The Government is aware of this and is trying to enact policies to protect the high carbon stock and high conservation value forests.

“But we feel the biggest danger for the butterfly is the illegal, global trade.

“It has been going on for decades and I would suspect the supply chains are very mature, very developed and very much under the radar.

“We believe figures for good specimens are up to £10,000 – and they have been found as far afield as Canada. This is of grave concern.”

The new butterfly nursery contains two sections, a flight cage where butterflies can breed and a large nursery for up to 100 caterpillars at a time. The project is led by Papua New Guinea entomologist Dr Darren Bito who is liaising with experts from around the globe.

Ian explained: “The eggs laid will be taken into the laboratory where under controlled conditions the life cycle will run through from larvae to pupation. Filters bring in clean air at ambient temperature and humidity and the room is under positive pressure which keeps it sterile. Up to 100 butterflies could be bred at any one time on a rolling cycle when we reach capacity.”

Once they emerge, some will be kept as part of the breeding programme while others will be released back into the wild. 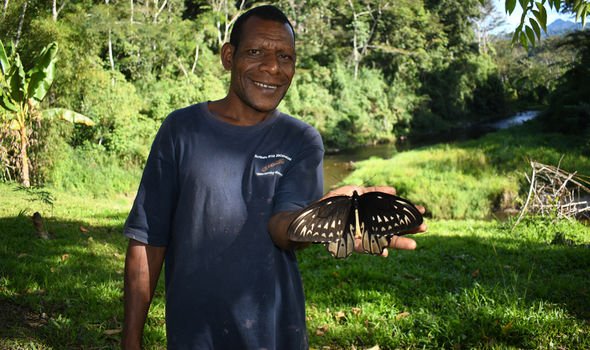 Adult butterflies will have their wings clipped – a harmless process to the butterfly, but one that devalues them on the black market. They will be then distributed back into the wild in areas where caretakers will grow their main food – an ivy-like poisonous plant called the Aristolochia vine.

Long-term, if the breeding programme is a success, it is hoped the revival of the species may create ecotourism opportunities – the area is already famous for the Kokoda Track hiking route which attracts visitors from all over the world.

Henry adds: “We can see how the orangutan, tiger and giant panda conservation campaigns, when linked with habitat protection, can save whole ecosystems and the thousands of species that live there, including the iconic species that we love to see.

“This butterfly is equally magnificent and our aim is to protect it for future generations too.”

Spoilt for choice, if you can find it: Rating the Olympics on 7Plus