Once-in-a-lifetime reform of the failing aged care sector is entirely in the hands of the Morrison government, requiring a philosophical shift from an administration the royal commission feared was only interested in a “minimum commitment”.

Commissioners warned fixing aged care cannot be left to the industry and the government must change its approach to aged care in order to do it – including writing an entirely new Aged Care Act and creating a new aged care safety and quality authority and star ratings for providers. 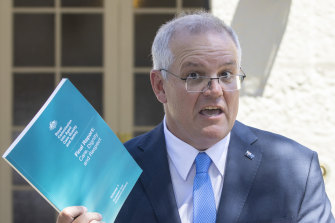 Prime Minister Scott Morrison said responding to the report would be a test for government.Credit:Getty

The Royal Commission into Aged Care Quality and Safety, which heard accounts of physical and sexual abuse at the hands of residents or fellow residents, inhumane restrictive practices and substandard food and medication practices, said only the government has the power to fix it.

“At times in this inquiry, it has felt like the government’s main consideration was what was the minimum commitment it could get away with, rather than what should be done to sustain the aged care system so that it is enabled to deliver high quality and safe care,” commissioner Lynelle Briggs said in the commission’s final report.

“The government must step up and embrace its responsibilities for aged care.

“In my view, only government can do this in a system as large, complex and fragmented as the aged care system.”

Announcing an immediate injection of $452 million in funding for the sector, Prime Minister Scott Morrison said he did not call the royal commission two years ago to ignore then it.

“I was serious when I asked [for] it because I wanted to know, they’ve told me, and now I’m committed to dealing with the issues that are raised in this report together with my government,” he said.

Merle Mitchell, an aged care resident herself and former president of the Australian Council of Social Service, said this was the nation’s one chance to make much-needed aged care reforms. 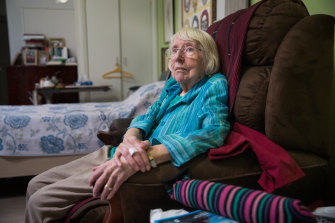 Merle Mitchell said this is the country’s one chance to fix aged care.Credit:Jason South

“If we can’t get it through this time, then we’ve lost the chance for my generation and the generations that are to come,” she said.

“We have to spend the money now, and it will take a lot of money … but I think people are prepared to pay for it.”

Commissioner Tony Pagone, QC, said the government’s desire to keep spending on aged care to a minimum led to “ritualistic regulation” which was weak and ineffective.

“Change is needed, but the change must be real,” he said.

The report will be used by the government as a five to 10-year road map to change in the sector. Health Minister Greg Hunt said it would have a comprehensive response by the May budget.

The exhaustive, 2800-page report contains 148 recommendations, which include enshrining the rights of elder Australians in legislation, creating an independent inspector-general to investigate and monitor governance of the aged care system, and mandatory minimum qualifications for workers as well as a national registration scheme for those staff.

But as well as making joint recommendations, the commissioners also differed on a number of points, including regulation and funding.

Mr Morrison said some of the recommendations were “completely conflicting with each other”, but Council on the Ageing chief executive Ian Yates was not concerned about the differences of opinion.

“Let us be really clear. They both agree that we have to have a huge quantum increase in funding, all they disagree about, or have alternative views about, is about what’s the best way of doing that.”

Speaking for the Australian Aged Care Collaboration, which represents more than 1000 aged care service providers, Pat Sparrow said it was critical the government followed through on the report.

“The government has made a start today but we are absolutely expecting to see fundamental reform, not just tinkering around the edges,” she said.

Labor’s spokeswoman for aged care services, Clare O’Neil, said the federal opposition was concerned about what the Morrison government was going to do with this report.

“They’re very good at saying all the right things about they respect older Australians, then they go into a cabinet room and slash funding from this crucial sector, and look surprised when things go wrong. I just find that very disingenuous,” she said.

Why This Commercial Caused A Stir During The Golden Globes