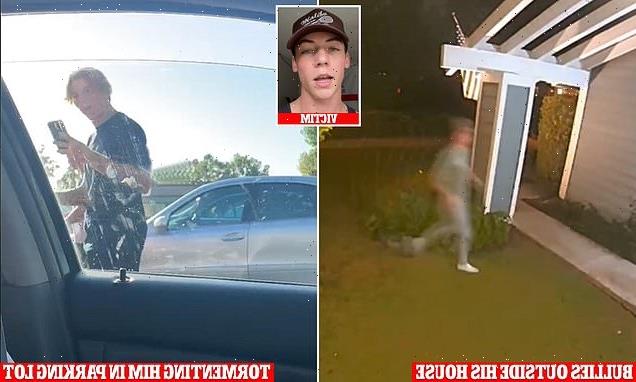 ‘This is a hate crime and I am sick of being silent’: Gay teen shares shocking video of bullies turning up to his HOUSE and hurling homophobic slurs at his family – after being subjected to YEARS of torment in school

A gay teenager has revealed shocking footage of bullies harassing him at his home and out in public – while detailing his experience with the bullies who have been repeatedly harassing him about his sexuality.

Landon Jones, 18, from California, shared a video revealing he’s been looking the other way for years when bullies would hurl homophobic slurs at him, but after a group of boys showed up at Landon’s home to harass him, he decided to no longer turn a blind eye to their cruel actions.

The footage shows two separate instances of Landon, who came out as gay in 2020, being bullied. In one instance, caught on a home surveillance camera, a young man approaches Landon’s home and screams Landon’s a ‘f****t’ before running off and in the other teens surround Landon’s car, refusing to let him leave a parking lot while yelling slurs at him.

In a viral video, which has racked up over 1.3 million views, Landon describes the bullying he says he has been subjected to and shows footage of the group of boys who have repeatedly harassed him. 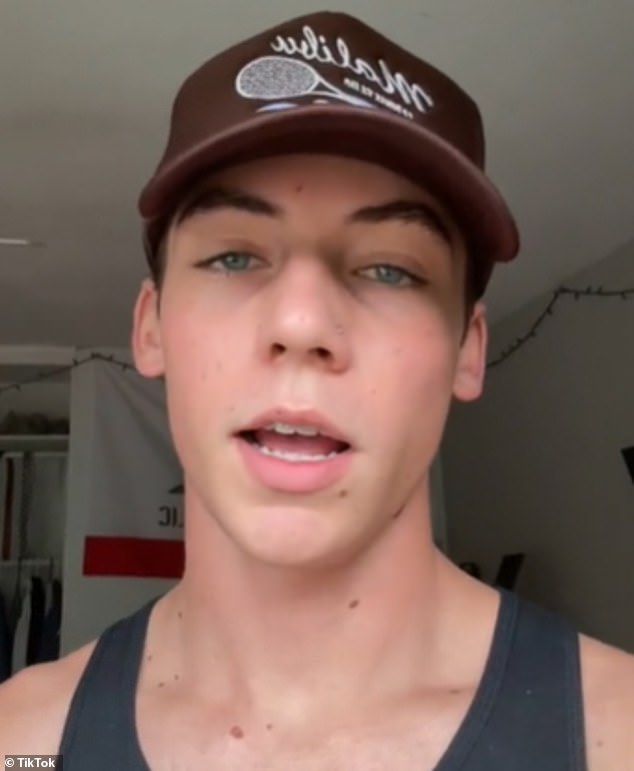 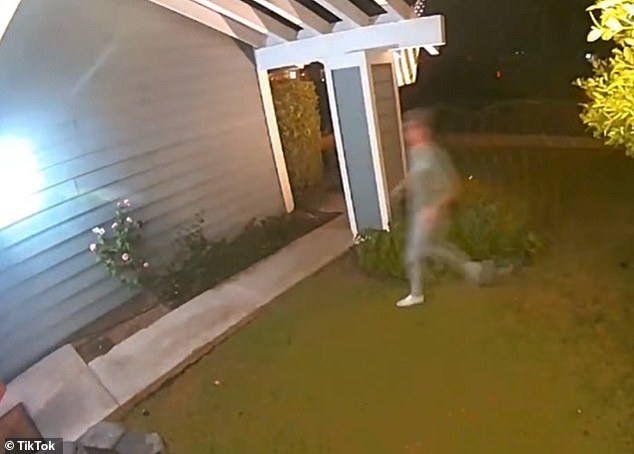 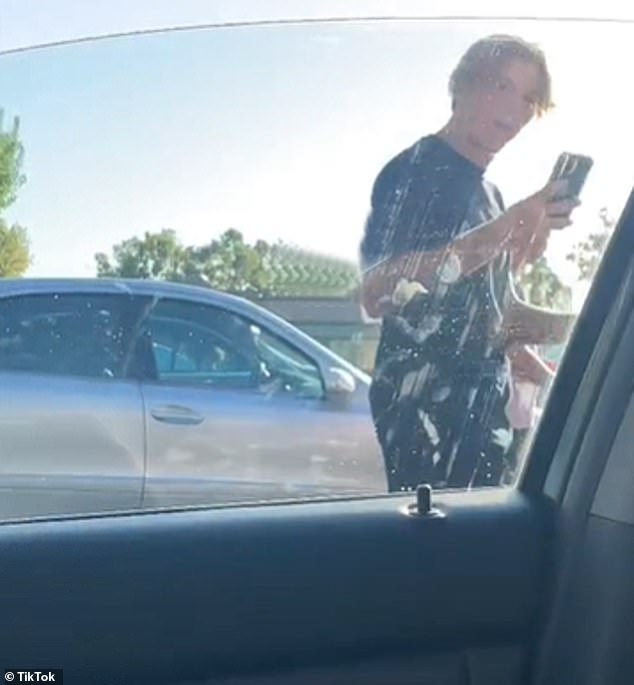 When the young men shows up to Landon’s home, he can be seen approaching the front porch and having a conversation with Landon’s father.

The young man then mumbles, ‘Someone said to come up here,’ before screaming, ‘because he’s a f****t’ and running off the property.

According to Landon’s dad, the young man jumped into the passenger side of a  black Lincoln Navigator and the car drove off.

The other instance, showed a group of young men surrounding Landon’s car as he and his sister sat in the Starbucks parking lot.

In the video, Landon claimed him and his sister ‘were apparently followed there’ and that the group of young men wouldn’t let him leave his parking spot as they hurled homophobic slurs.

‘I have been called “f****t” countless times at school, and it literally doesn’t bother me at all. The fact that they came to my house does,’ Landon said while describing the bullies who had targeted him for years.

The TikToker claimed that one group of boys from his high school, El Toro High School (ETHS), has been continuously targeting him and have ‘repeatedly called me names, and called me slurs, have followed me, and have now come to my house to say these things’.

He explained that he had ‘never spoken’ to these young men before and added that they were just targeting him because he’s openly gay.

Landon added:  ‘They just simply know the fact that I’m gay and I’m out at school, and they choose that and they hang on it and they just give me that attention. The negative attention that they think is so funny.’

The teenager then discussed the clips he shared and noted that he had told El Toro High School what was ‘going on’, but added that he requested the students in question not be punished before explaining he didn’t want their lives to be ‘affected by this.’

He added that the clip of the boys who walked up to his front porch and screamed slurs before running away occurred on September 29, around 10:30 pm.

The 18-year-old condemned the repeated bullying as ‘harassment’ and claimed it was a ‘hate crime.’

‘Now, I don’t know if you guys know this, but these are hate crimes. This is harassment.

‘And after last night, I am fed up with it. I’m done. I have been called f****t countless times at school. It literally doesn’t bother me at all. But the fact that they came to my house does.’ 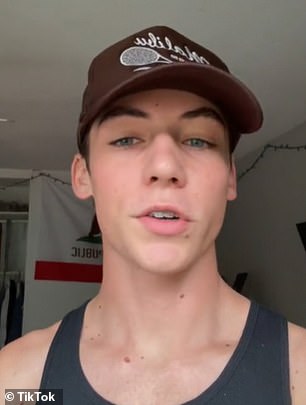 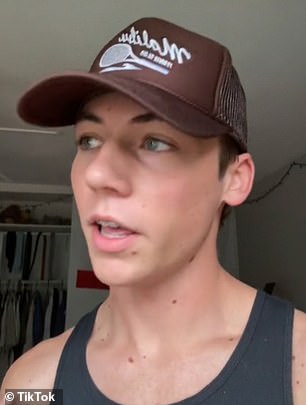 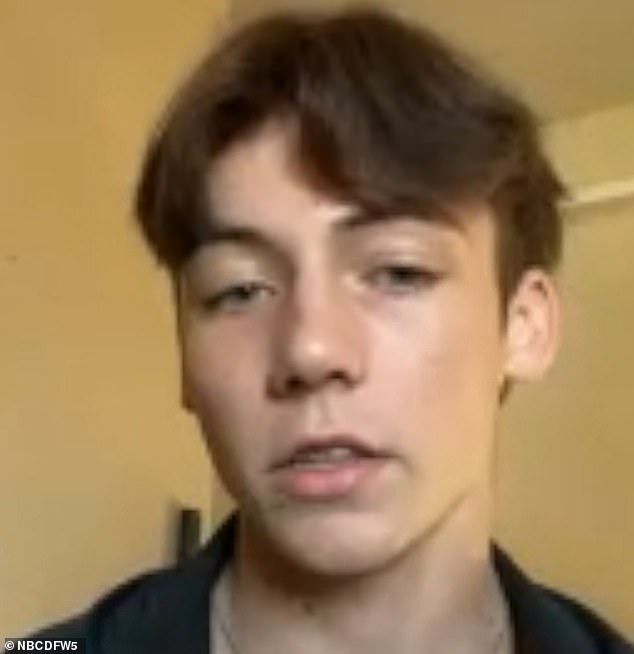 In an interview with NBC, the 18-year-old explained he was ‘sick of being silent about it’ before adding that he was ‘finally’ ready to speak up

‘I had no sleep that night. I was honestly really upset. I was crying,’ he told NBC of the night of the incident

Landon ended the video by emphasizing those who have been bullying him would be facing consequences.

In an interview with NBC, the 18-year-old explained he was ‘sick of being silent about it’ before adding that he was ‘finally’ ready to speak up.

He explained that the last straw was when the group of boys came to his home.

‘I remember being up in my room, hearing it, and I heard what he said. I immediately jumped out of bed and walked outside to see what was happening. I had no sleep that night. I was honestly really upset. I was crying,’ he told NBC.

At first, Landon explained that the young man in the Starbucks video and the young man who showed up to his house, both attended his high school in Lake Forest, which is part of the Saddleback Valley Unified School District.

He then clarified that he had heard from other people that the young man who showed up at his house attends a different high school nearby, but can’t confirm the accuracy of that information.

A spokesperson for the school district told NBC that the ‘unconscionable acts committed against Landon Jones do not reflect the feelings or values of Saddleback Valley Unified School District (SVUSD) and El Toro High School (ETHS).’

In an email, Wendie Hauschild, the school district’s director of communications and administrative services, said: ‘ETHS and SVUSD administration, together with the Orange County Sheriff’s Department (OCSD), immediately launched a comprehensive investigation to uncover the facts of the incidents. 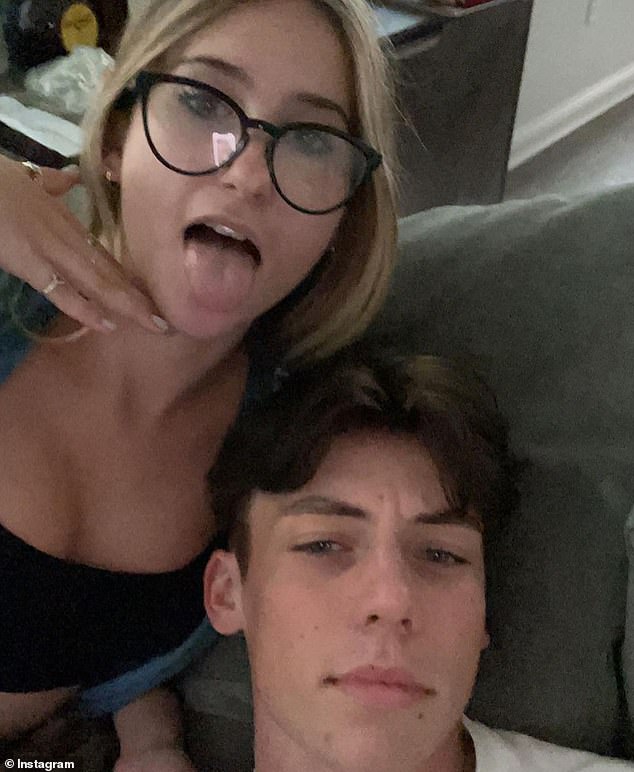 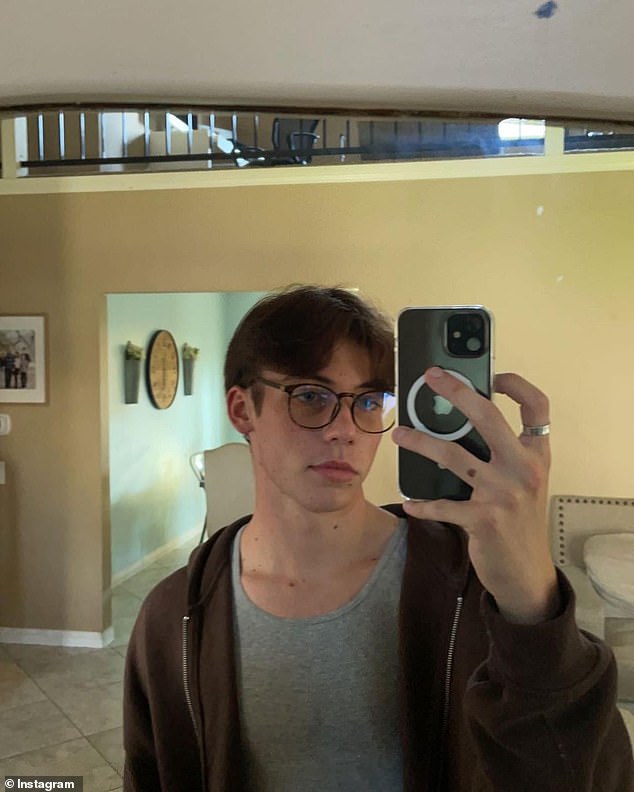 Landon explained that him and his family have spoken with El Toro High School to punish the bullies; however the investigation is ongoing

‘We can confirm that the person seen in the surveillance video of the incident that took place at a private home is not a student in SVUSD. Due to the confidentiality that we are required by law to uphold for our students, as well as other minors, SVUSD is unable to share further information regarding the results of the investigation.

‘SVUSD remains steadfast in its commitment to create inclusive, supportive, and safe environments for all students on our campuses.’

When asked about the incident that showed the group of young men harassing Landon at his home, an Orange County sheriff’s spokesperson revealed a resource office at El Toro High School spoke to ‘individuals that may or may not have been involved in this incident’ or ‘possibly have knowledge of the incident.’

He added that the person who went to Landon’s home hasn’t been identified and the ‘investigation remains ongoing.’

Landon is still attending El Toro High School but has transitioned to virtual learning because of ‘bullying and a rough experience with the school,’ he said.

In joint statement to NBC, Landon’s parents, Lauren and Nathan Jones said Landon has been ‘called names and made fun of’ since he was young because of the way he looked and because his interests didn’t align with his classmates.

‘Kids and even adults can be so cruel to people that are different from them.

‘This behavior will not be tolerated and we will never turn a blind eye to injustices like these. We have a family to protect and that is our number one focus right now.’

The Jones family added that they reached out to El Toro High School and told administrators that the driver of the black Lincoln Navigator was a student there, but they haven’t been made aware of any action having been taken yet.

Since Landon shared the video, he has received an overwhelming amount of support, with many users giving him words of encouragement

Landon and many others who have opened up about their sexuality are facing the cruel after effects from anti-gay bullies as the number of LGBTQ students who are subjected to harassment continues to grow.

According to a report published last year from The Trevor Project,  a nonprofit LGBTQ youth crisis intervention and suicide prevention group, the majority of LGBTQ youths (52%) enrolled in middle or high school reported having been bullied either in person or electronically in the year before they participated in the survey.

Since Landon shared the video, he has received an overwhelming amount of support, with many users giving him words of encouragement.

Former ‘American Idol’ contestant David Archuleta, who came out publicly last year, commented: ‘Oh gosh… sorry you’re dealing with that there’s no justification for what they’re doing to you and so shallow of them.’

TikTok personality Ophelia, added: ‘Landon, I’m so very sorry you are going through this. How can we help you? Please tell us.’

Another user wrote: ‘Sorry that you’re dealing with this. No one should have to put up with something like this. I hope action is taken to put an end to it.’

‘I’m so sorry you have to deal with this, you seem like an amazing person and definitely don’t deserve any of this hate,’ commented another user.

JACI STEPHEN reveals how Emmerdale became a hotbed of scandal

Can you ever come out of a camping trip feeling refreshed? Here's what you need
Entertainment